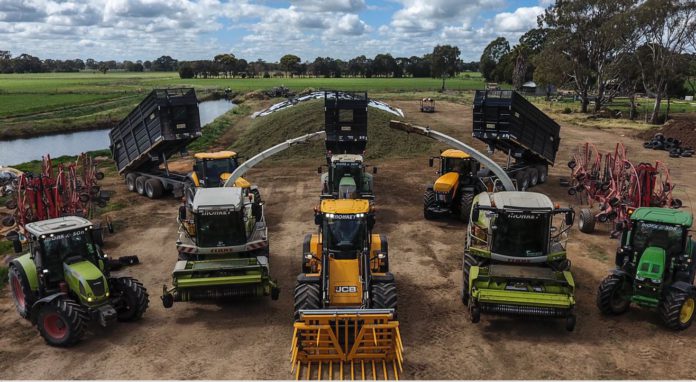 Pictures: Working for an agricultural contractor in Australia

My name is Michael Gleeson (21) from Co. Offaly. I spent most of my time as a young child on my uncle’s farm and started drawing for my local contractor at the age of seventeen.

From there on, I worked with them until 2019 when I took a leap of faith and ventured to Australia where I remained for three months.

I travelled to Australia on August 30th, 2019 to work with Monk and Son Ag in Cobden Victoria. They run a fleet of Fendt, John Deere and JCB along with a Class Jaguar 950 and 960 choppers and JCB 435s.

They also own Claas mowers and also a large fleet of McHale V660 balers and a brand-new Fusion.  It was a big change and I will admit that it was difficult to settle as it was my first time away from Ireland.

I stumbled across Monk and Son on YouTube and having family members in Australia already, I knew it was the best place to go. I travelled out to Australia with a friend who was also working with Monk and Son at the time.

The first thing that struck me when I landed was the difference between the countryside in both Ireland and Australia. Everything was done on a bigger scale and the way the Australians farm compared to the Irish was very interesting.

Most of the land out in Australia was flood-irrigated; this consisted of check banks in the middle of the fields to hold the water when the land needed to be irrigated.

We covered a large area in Australia. When I first landed, I headed to Deniliquin on NSW. We covered a lot of ground up in NSW and we worked our way back down towards Kyabram and Cobram and eventually got back down to Warrnambool which was just an hour away from the yard.

I was placed on a Kuhn 4-rotor rake when I landed out – this was my first role with Monk and Son Ag.

It was very interesting raking out in Australia as it’s a lot different from Ireland. We ran two four-rotor takes-out, both being a Kuhn and a Kuhn Merger.

Everyday was the same really when it got really busy. You would arrive in the yard where the machinery was left, and you would check everything before we left.

Main checks included engine and coolant in the tractor and then grease the rake and make sure all the tines were tight and secure.

Then you would get sent a drop pin to head to the next job with some jobs being 2-3 hours of a journey. Everyone worked seven-days-a-week as there was a lot of work to get through. There was a very large team working out with the team comprising of Irish, Australians and New Zealanders.

The best thing about working out in Australia was getting to experience so much machinery. There was always something different to do and everyone was willing to learn.

You also make some of your best friends out there as well. It was difficult to get used to the weather conditions, as it was a lot warmer than Ireland.

There were a few similarities between Ireland and Australia. One of the main similarities was the rush to beat the rain. Most of the gear was similar to Ireland as Monk and Son bought Smyth Tri-Axel trailers which are made in Ireland. He currently has six Smyth trailers with three more coming next year.

This was my first-time working overseas and I would definitely return to Monk and Son for the simple reason that the employees were always well looked after, always fed, always accommodated and always treated right.

I’ve learned a lot from being overseas about different types of machinery and how to work them and how to maintain machinery on your own.

Since I’ve returned home, I’ve been working on a tillage farm, getting the last of the potatoes out of the ground.