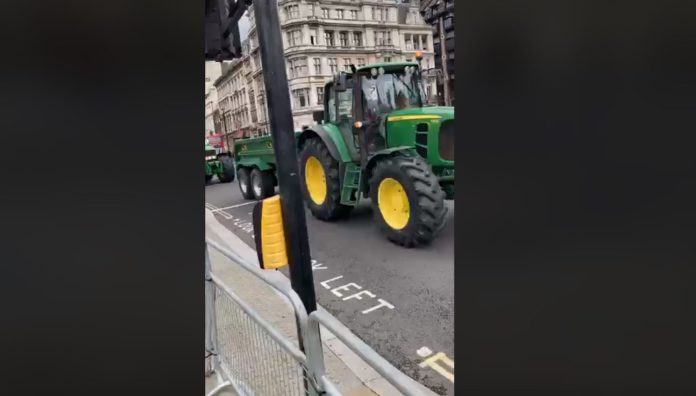 Tractor drivers ventured to Westminster yesterday (Wednesday, July 8th) to protest a bill which will allow chlorinated chicken and hormone-fed beef into Britain.

The demonstration was organised by Save British Farming to “protect food standards and farmers”.

The campaign group of activists said it is “against the opening of floodgates to lower-regulated food”.

“We are activists protesting the Government’s current Agriculture Bill which will ditch British animal welfare and environmental standards for farm imports, flood the UK market with cheap, low-quality food and destroy Britain’s farming industry.” the group explained in a note on its GoFundMe page.

“We are also lobbying MPs to vote to amend the bill to save our food standards and our farmers.”

“We are all volunteers and only need money for campaign assets – Money raised will be spent on campaign banners, Banners and posters for farmer’s fields, and admin costs associated with the campaign.”

“And together, we can save our food standards and our farmers.”

In a tweet, the group said that it was “great to see lots of supporting for protecting our food, environmental and welfare standards”.

- Advertisement -
Previous articleVIDEO: 12-month-old heifer sells for just under €6,000
Next article‘Biggest’ sheep sale of the season at Baltinglass