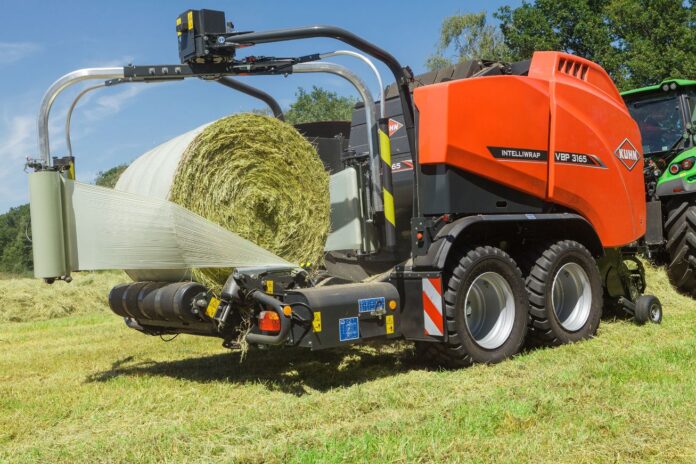 KUHN has taken the wraps off its new VBP 3165, which now features a twin-reel film binding system like that of its popular fixed chamber balers.

According to the company, this enables the flexibility of a variable chamber baler to be coupled with the improved INTELLIWRAP system that only uses a 750mm film wrap to reduce costs and save time.

KUHN stated that its patented duck-bill film applicator optimises film binding, which helps to reduce the amount of film required.

Therefore, it claims that it can save operators up to 37% compared to a traditional wrapping system.

Furthermore, at 25 kilos, with a waist-height mounting point, the rolls are also “much easier” to handle and change. The 750mm width also makes the rolls easier to store.

“This will save contractors and farmers time in the field and make ordering easier. There is space on board to store ten rolls of film, meaning the operator can carry more than sufficient for a day’s work.”

Unlike a fixed chamber baler, operators can use the VBP 3165 for different forages in various conditions. The company highlighted that this is of “particular use” in wet conditions where the chamber can adjust to account for changes in weight and forage type.

“This provides operators with an option to work in poorer conditions and still lock in the nutritional value to make the best use of forage,” he added.

The VBP 3165 creates what Kuhn describes as a “tighter, more compact” bale with better protection around the circumference of the bale.

This oxygen barrier helps improve bale quality resulting in a bale with a higher nutritional value. It has also adjusted the bale shape to make it easier to handle and store.

By using one type of binding method, no separation of film and net is required when feeding. Kuhn outlined that this reduces the time and also means operators can recycle all film uniformly.

“The bales are also easier to unwrap, even during frost periods, because silage does not collect between the film. This means that no feed is lost when the forage is unwrapped,” he said.

By combining the flexibility of a variable chamber machine with film-on-film binding, KUHN has created what it views as a “faster, more economical baler that will have particular appeal to contractors”.

“For those looking to create a more nutritious bale in a variety of conditions, the VBP 3165 is an excellent combination of simplicity and economy that will improve bale quality and reduce film costs.”

- Advertisement -
Previous article
Cull cows to €2,360 and heifers to €2,140 at Dowra
Next article
How to maximise output from grazing this spring