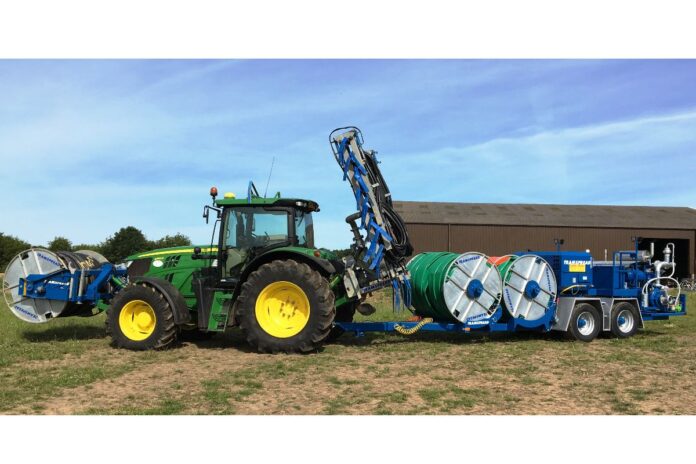 It has widened the chassis of its contractor trailer by 200mm to enable the trailer to carry more equipment. The remote control will enable single operator use.

According to the company, this can pump up to 300 cubic metres per hour depending on distance and hose diameter.

The long drawbar enables the operator to carry an applicator, such as a dribble bar, on the tractor’s rear three-point linkage while towing the trailer.

Furthermore, the remote control features a seven-inch colour screen and industrial-grade instrumentation that you can operate utilising Apple or Android mobile devices.

Communication, the firm claims, is not compromised by distance, and you can control multiple pump units by the same device.

“This means that an operator pumping over an eight-kilometre distance with four pump units will only need one device to monitor and operate all pump units.”

“The combination of knowing the speed of flow and being able to control it remotely are key to the time and equipment savings this trailer offers.”

“The unit also keeps a record of the slurry utilised so operators can measure how effective each application is and improve distribution in the future.”

You can carry up to 2,000 metres of drag hose on two galvanised detachable spools at the trailer’s front.

Furthermore, you can carry 1,000 metres on the tractor’s front 3-point linkage via a powerful twin hydraulic drive reeler. The company confirmed that this gives the total system capacity of 3,000 metres.

Over the twin sprung high-speed axles, there is a large 900-litre fuel tank. Mounted over the fuel tank is a compressor, which is also remote controlled. Furthermore, there is a suction hose loading area with two large toolboxes.

Other machinery articles on That’s Farming: