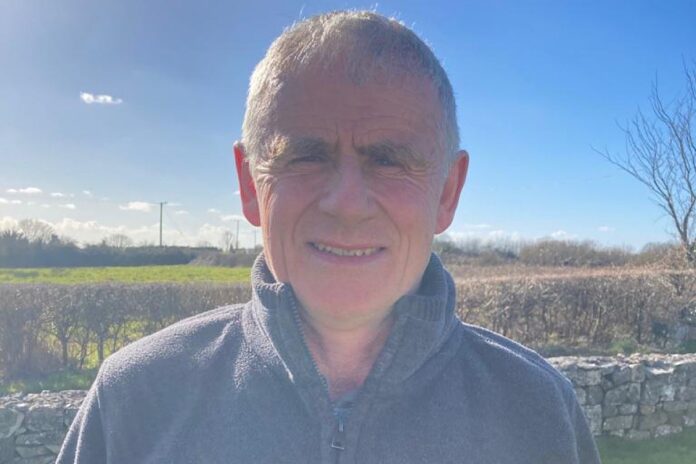 Sean Condon, from Limerick, converted to organics 17 years ago from 70 cows on a conventional farming system.

Today, he milks 50 cross-bred cows on 59 hectares, of which 40 is owned in Fanningstown, County Limerick. He gain his full organic symbol in 2008.

A large percentage of his herd consists of Norwegian Red-cross Jersey-cross-Holstein Friesian cows with some Jersey-cross and Friesian females.

“We originally had British Friesian cows, and then we started using Holstein Friesian like everyone else,” Sean Condon told That’s Farming.

“I was interested in once-a-day milking and a low-input costs system, so, I started cross-breeding, and with the Friesian, I crossed to Norwegian Red and Jersey cows.”

“My father, Joe, milked cows, but he was not organic. So, I was always interested in organic farming, and I took the jump when I took it, but like everything else, it took time.”

“Growing up, some beef calves were reared to store stage. I did not attend agricultural college, but I completed courses with Teagasc. I think they were a 180-hour course at the time.”

Sean’s ideal cow weighs 500kgs, is hardy, can work in an outdoor grazing system and can produce 330kgs of milk solids.

“The Jersey-cross were being recommended as suitable for once-a-day milking, and I would not disagree with that. The Norwegian Red cows are a healthy breed, and I felt I would go for a healthy, hardy breed.”

“My EBI is €136. EBI is important as high EBI cows are most efficient.”

The herd’s size decreased when the farm branched into raw milk production.

“I wanted to make it simple when I was bottling milk. I could make more money with a smaller number of cows bottling some milk than chasing numbers.”

“It is once-a-day miking, so litres are lower, but the price is higher. It is a low-cost system without meal.”

“I might feed some concentrates in December or January if I was milking a few cows to bottle the milk, but for the most part, I do not feed any meal.”

Sean uses one round of conventional AI on his heifers, and an Aberdeen Angus stock bull mops up.

Sean starts breeding his heifers on May 15th and introduces the stock bull into the herd after three weeks for ten weeks. “It is a little later with organic farming to be closer to grass growth.”

“The Livestock Improvement Corporation Limited (LIC) has a good number of bulls from a once-a-day farmer’s point of view. They are one company that has a once-a-day (OAD) index.”

“I suppose as we learn about once-a-day milking, you learn to use bulls that produce daughters that are low on somatic cell count.”

“I would not restrict myself to those bulls, but that is where the Norwegian Red breed comes in with their low somatic cell count. They are healthy.” 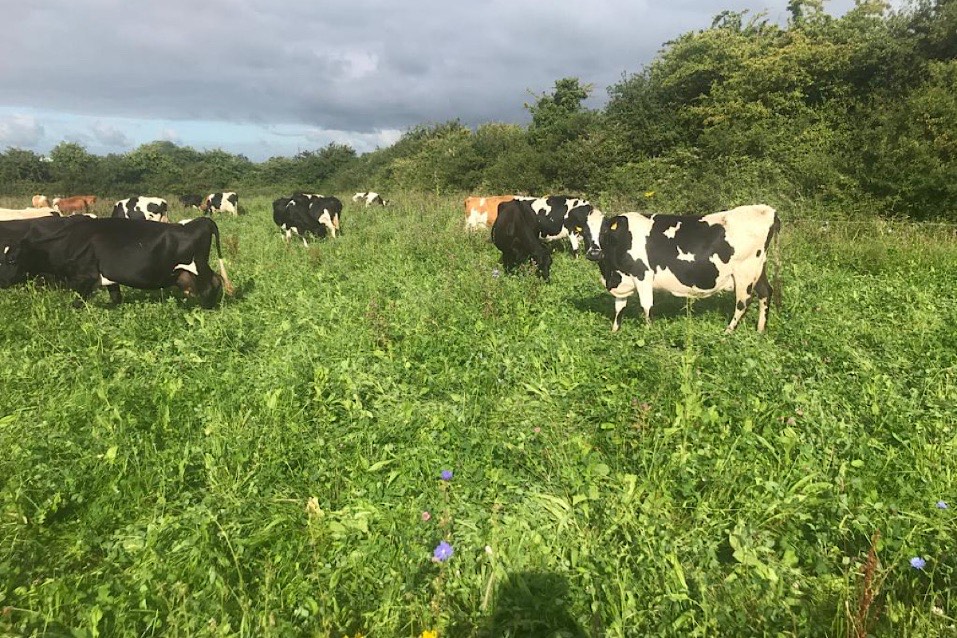 “I like to calf to grass because it is cheap feed, especially in an organic system where cereals are very dear.”

Commenting on how he implements technology during the busy period, he said: “I use Herdwatch to complete my compliance recording work and to register calves in particular.”

He explained why he chose to calf his heifers at 24-months.

“We have been told it is the most efficient time, and it probably is. I calved two weeks earlier when I was farming conventionally.”

In addition, he keeps up to eight replacements annually. He sells the remainder of his heifers as in-calf heifers or one-month-old calves on-farm.

Sean implements a strict culling policy for cows with mastitis or due to age. He fattens them on a grass-based diet or sells them direct on-farm or at Kilmallock Mart.

He sells his Angus bull calves to an organic farmer and Friesian bulls on-farm.

“Friesian calves are not reared for organics. You will not get the organic premium on Friesian beef, so organic beef farmers do not generally rear Friesian calves.”

Sean measures his grass “by the eye” but used a plate meter in previous years. He has a stocking rate of 1.2 LU per HA.

“I have not reseeded in a few years. I am growing enough grass for the stocking rate without much reseeding.”

“I try to keep a good handle on my grass and good-quality grass ahead of the cows.”

Sean milks in an 11-unit milking parlour – which he originally installed as a Pearson before adding more units. He milks his cows once-a-day over a 60-minute period.

“I used to have a 6-unit milking parlour, and I went to an 11-unit 20 years ago. The reason I expanded was to speed up milking time.”

“I am happy enough with my parlour. I feel it is big enough to milk my herd, and it is doing the job for me; I have no reason to make any changes to it.”

Other infrastructure includes a straw-bedded shed for his cows and a selection of calf sheds. 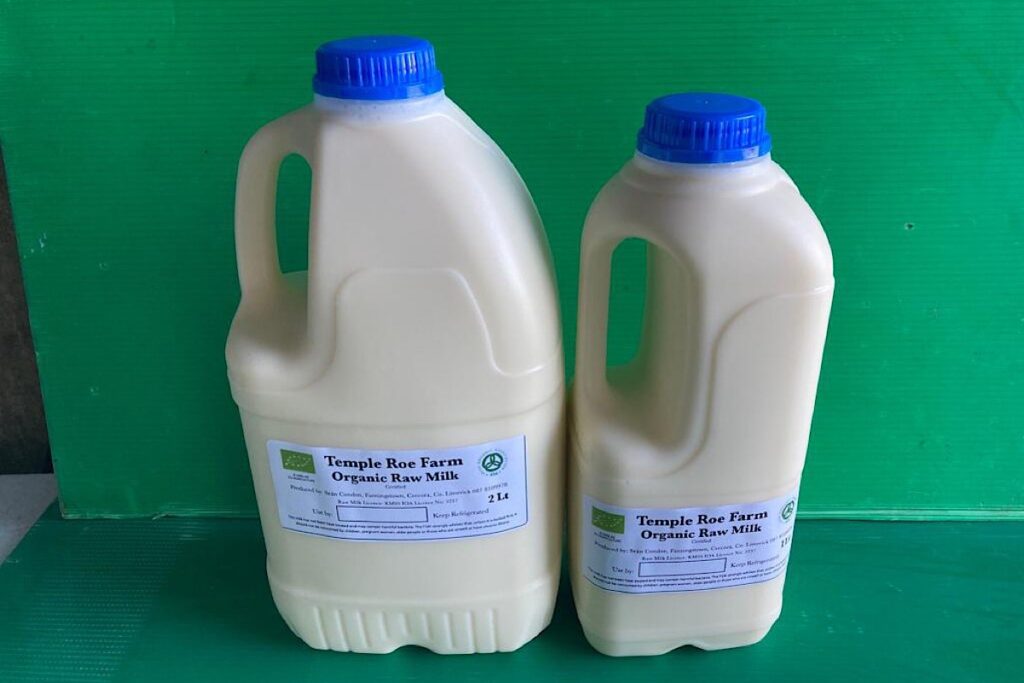 The Irish Organic Association member is also the founder of Temple Roe Farm and has been a raw milk producer for six to seven years.

“I was selling raw milk to a few people who asked me from the farm gate, and I realised there was an opportunity for a profitable business.”

He sells 70,000-litres of bottled milk each year from the farm gate, with The Little Milk Company taking a further 85,000 litres to make organic cheddar.

In addition, he sells milk to NeighbourFood and The Natural Milk Company, which distribute the raw milk to shops.

Sean sells his milk in glass bottles and one and two-litre plastic bottles. He ensures a year-round supply of milk with late callers and empty bottles.

“Milk is €2 per litre from the farm gate. It varies in shops depending on glass or plastic bottles but it is around €3 on average.”

The main shop he sells to is The Urban Co-Op in Limerick.

“I get a premium for my organic milk from The Little Milk Company. My average milk price for all my milk, including bottled milk, should be about 0.84 cents per litre for 2022.”

“I do not let people reuse their bottles because it is too risky. You cannot be sure that somebody has cleaned their bottles properly.”

“I have to be careful with raw milk and make sure things are done properly. I do not wash bottles either, so it is fresh bottles all the time.”

Employment and providing a product for a niche market

Sean employs one worker through Farm Relief Services (FRS) for a few hours a week to assist him in bottling the milk.

“We bottle the milk in the dairy with a tap and pump the milk into a jar and bottle it that way. So, the investment we did was small; it was a milk pump, a glass jar, and a filter.”

“It is a niche market, and I find people who are looking for it are very educated on it, and they have their research done.”

“People were looking for good food, and the sales were very good during the Covid-19 pandemic.”

Sean said the challenges in the sector for him are weather, the environment, calving season, grass growth, and rising input costs.

“Grass growth can be a little later in the spring, but you can get over that challenge by calving later.”

“Meal prices can also be extremely high in organics, so if you were going into a system where you are using concentrates, you would want a very good price.”

“We have to be realistic and make sure that we are not causing pollution. I feel that is extremely important for the image.”

“In my view, there is no point in dairy farmers resisting rules in relation to pollution and wasting greenhouse gas levels. It is very important for farmers to have a good image because if our image is poor, we will pay with the consumer.” 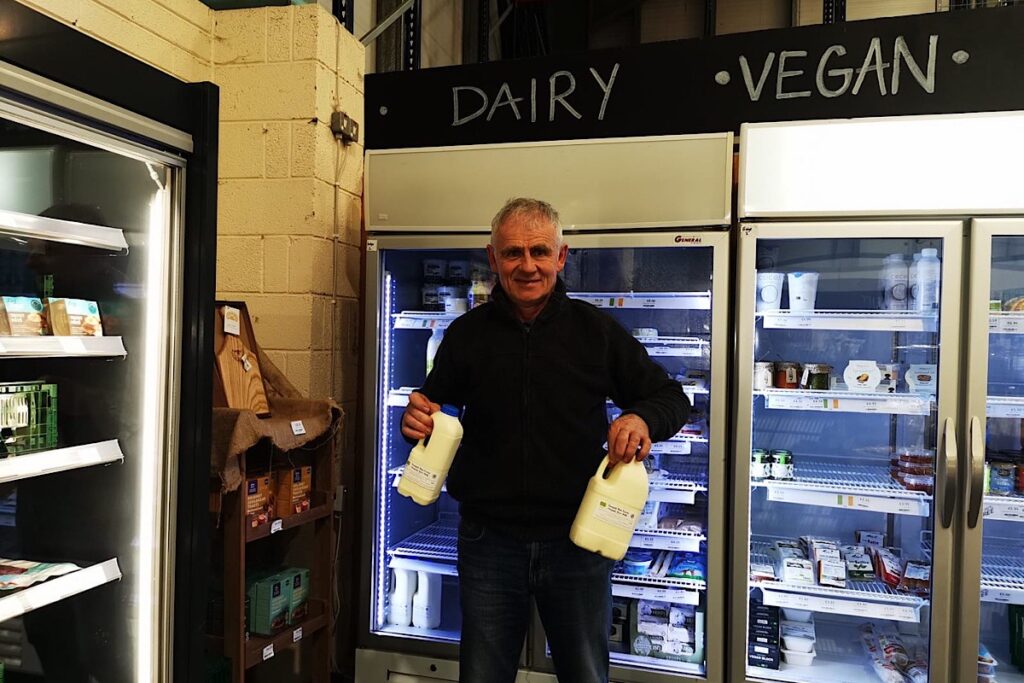 Sean intends to continue producing raw milk and maintain his dairy herd at the same numbers.

“I am focused on getting a milk price per litre for my milk. The bottled milk brings up my price in a big way. I am not following production targets; whatever I produce off-grass, I produce off it.”

“I would be very positive about the future of dairy farming, providing we are sensible in relation to looking after the environment and not causing pollution.”

“We need to be sensible about herd expansion and not let it go over the top. We tend to be a little behind and following what New Zealand have been doing down the decades.”

“Milk prices have been positive, and it seems positive this year. People need milk prices to be positive with the way costs have gone. I suppose milk prices will always be up and down,” the dairy farmer concluded.