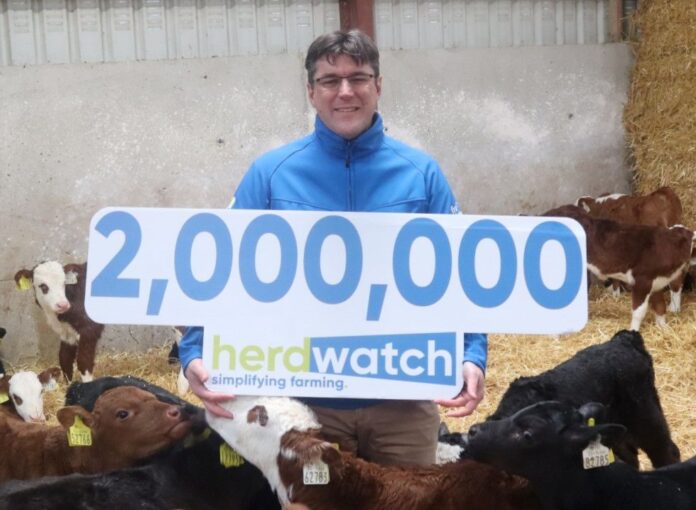 Farmers have registered over 2 million calves via Herdwatch’s app.

It expects it to rise even further over the coming weeks, with calving season in full flow.

This landmark number illustrates the impact Herdwatch has had on Irish farming.

According to the company, more than 16,000 farmers now utilise the app, which replaces traditional pen and paper methods for recording their calf births.

Herdwatch member surveys indicate that every farmer who uses the app saves on average 3 hours a week.

Other benefits Herdwatch provides to farmers include:

Herdwatch Founder and CEO, Fabien Peyaud said Herdwatch eliminates some of the stress farmers experience during calving season by allowing them to register their calves in seconds on the app.

He said they “do not have to worry about filling forms later”.

“More than 16,000 farmers use Herdwatch because they have seen how much it helps them, how it simplifies their farm management activities and how reliable a service it provides.”

“The calf registration tool is just one of many practical features included in the app, all designed to make farmers’ lives easier and make their farm more profitable.

He added that Herdwatch keeps millions of digital records safe on behalf of farmers with the ultimate aim of reducing paperwork and helping farmers make better farm business decisions.

“Already, the records for 2 million calves have been safely managed through Herdwatch. We look forward to recording millions more as our app evolves to provide ever-increasing support for Irish farmers,” Mr. Peyaud concluded.

The milestone comes after an exciting few months for Herdwatch, which included adding extra features to their app, such as the popular farm mapping service.

According to the company, Farm Maps by Herdwatch has seen more than 100,000-acres of farmland mapped so far.

Furthermore, the firm has also announced details for its upcoming new venture, Flockwatch.

It said this would provide sheep farmers with the same “ground-breaking” benefits and innovations as it has delivered for dairy and beef farmers.

Herdwatch has also revealed plans to double its workforce by 2024.

This will enable them to add further enhancements to their farmer-focused apps in the coming months and years.

- Advertisement -
Previous article
Quiz: How much did these dry cows sell for at Ballymote Mart?
Next article
Men in court over ‘high-value’ machinery thefts