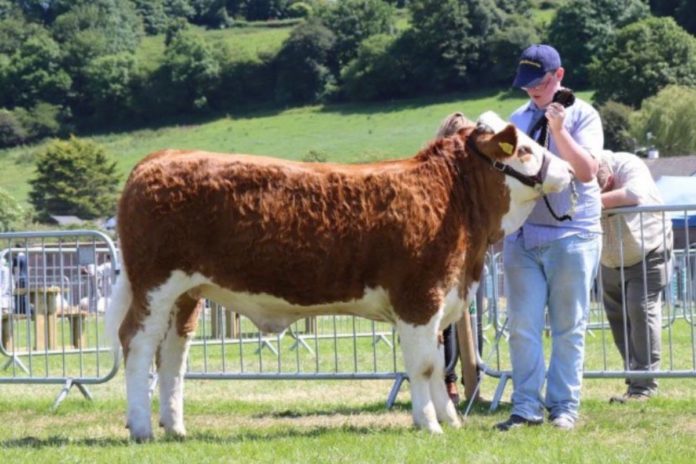 Killian Farrell caught the showing bug through his father, Noel, buying a stock bull at a Charolais show and sale in Carrick-on-Shannon, when he was seventeen.

The Tipperary native grew up on a suckler farm but moved to rent a 30-acre farm beside his workplace two years ago. His herd comprises seven pedigree Simmental females and one Charolais, which he farms under the Suirville prefixes.

Killian graduated from Ireland’s only veterinary medicine school, UCD, four years ago and is now based at Farm Gate Veterinary in Co Galway.

“I remember going over to my grandfather’s farm milking cows on Sunday evening with my father and calving cows from a young age. We grew up on a farm; it is all we know,” he told That’s Farming.

“My father is one of a large family. He had some land in Waterford and was farming away there, but there was a ring road going through the farm, so we closed up there and moved to Tipperary.” 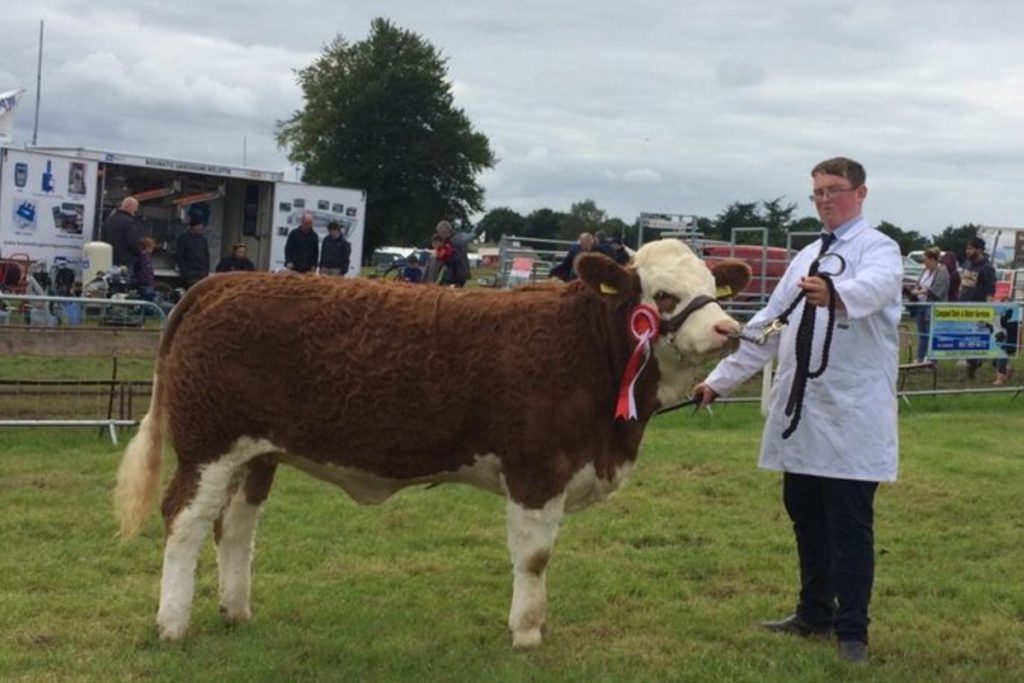 He then purchased Seaview Diamond from Tony O’Leary privately, and Carbury Gemma at the 2016 Irish Simmental Society premier sale.

Killian used ET work in the herd, which increased the number of high-end calves produced in a sole year.

Killian outlined why he chose the Simmental breed and traits he seeks in his breeding females.

“I chose Simmental because I wanted a cow that was going to have plenty of milk to rear her calf.”

“Simmental is the best maternal breed of cow, in my opinion. They can be crossed with a lot of breeds to make an excellent commercial cow.”

“When I am buying a heifer, she has to have a nice head. I would never buy a heifer if I did not like her head.”

“If I can find out something about the dam to see if she had milk and all of their traits as well is a bonus.”

Killian flushed her, and her embryo calves have come on stream over the last month.

“I got into Charolais because, from my experience, Simmental bulls have been harder to sell over the last few years, especially in Galway.”

“I am only farming a couple of miles from Ballinasloe Mart, and if you have a Charolais weanling, I find it sells better than if you have a Simmental weanling.”

“Hence, the Charolais bull is easier to sell to the commercial farmer selling their weanlings.”

Killian synchronises all heifers on one day through a CIDR programme which Killian commented is a labour-saving technique.

Breeding occurs over 12 weeks with approximately 3-4 rounds of AI.

“I try to pick a sire that will suit the cow. If a bull had bred well to a cow already, I would try to pick that sire again.”

“It does not justify having a stock bull as I have such small numbers. When you have a stock bull, you cannot mix and match. The part of the game I like is picking different bulls to match different cows.”

“I used sexed semen with Coose Jerrico last year for the first time. I have a heifer calving down in two weeks, so it should be a female calf.”

The owner of Suirville Pedigree Cattle shared his opinion on the genetic pool available in Ireland and overseas.

“This whole €urostar game is decreasing options for breeders. It is causing breeders to use a lot of the same bulls.”

“If we all pick the bull with the highest star rating, it completely dilutes the genetic pool, and it will be difficult to pick bulls in the future.”

“Certain breeders are picking bulls based on stars alone. While they are getting a bull calf that is very saleable based on their figures, it may not be at a good enough standard for breeding.”

“However, some farmers are buying bulls based on his figures alone. This is leading to inadequate bulls breeding in herds and leaving poor stock behind them.”

“It is very hard to go out and buy a stock bull that has not got certain genetics that you will want to cross with your cow.”

“Ireland has probably the best beef Simmental in the world. A lot of countries have a dual-purpose Simmental breed and breed for milk more than the beef qualities that the Irish suckler farmer requires.”

“Whereas Charolais breeders have the option of going to France to source outcross genetics. The  Simmental breeders are probably more limited.” 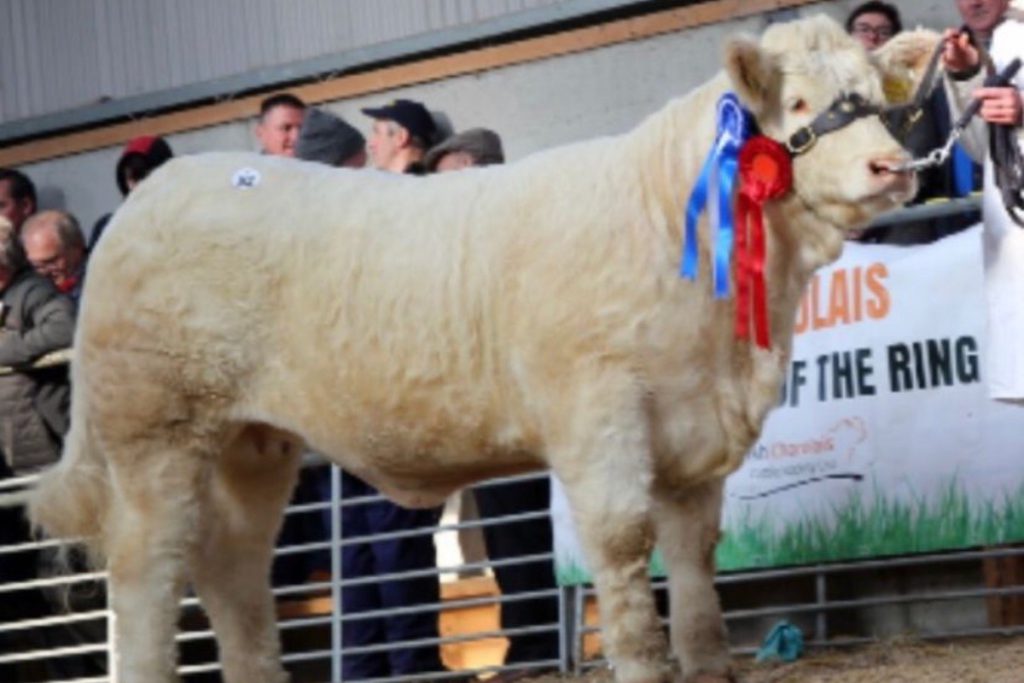 Killian calves down his cows in September and October due to more demanding work commitments in springtime.

He places cows near calving in a paddock close to a shed fitted with a calving camera from Gaeltacht Communications and houses when they are due to calve.

The herd’s calving interval is 381 days, a figure it is achieving through its synchronisation programme.

The vet gets all cows cycling at the start of the breeding season and helps females come into heat faster.

He also breaks the maternal cow-calf bond to help cows come into heat faster. This involves locking calves in the creep area at daylight and leaving them out at night to suckle from their dam.

He opts for 24-months for calving down his heifers. “If a heifer is good enough, they will be big enough to calve at that stage. In my opinion, all you have to do is select an easy calving sire.”

“People think they cannot calve down at two years and leave them until they are three-years-old; they are too big and too fat then. I think you nearly get more calving difficulties.”

“It costs money to keep a cow, and if she is not producing a calf that year, it is less income for you. You have the cost of keeping the heifer without having the benefit of a calf to sell.”

“Any bull I do not think is not good enough, or I would not breed for myself, I do not sell. They are sent for beef as bullocks or are sold as weanlings in the mart.”

“This year, because of the Covid-19 pandemic and we are trying to promote the breed, I decided not to sell on-farm and bring better cattle to society sales in Roscommon on October 23rd.” 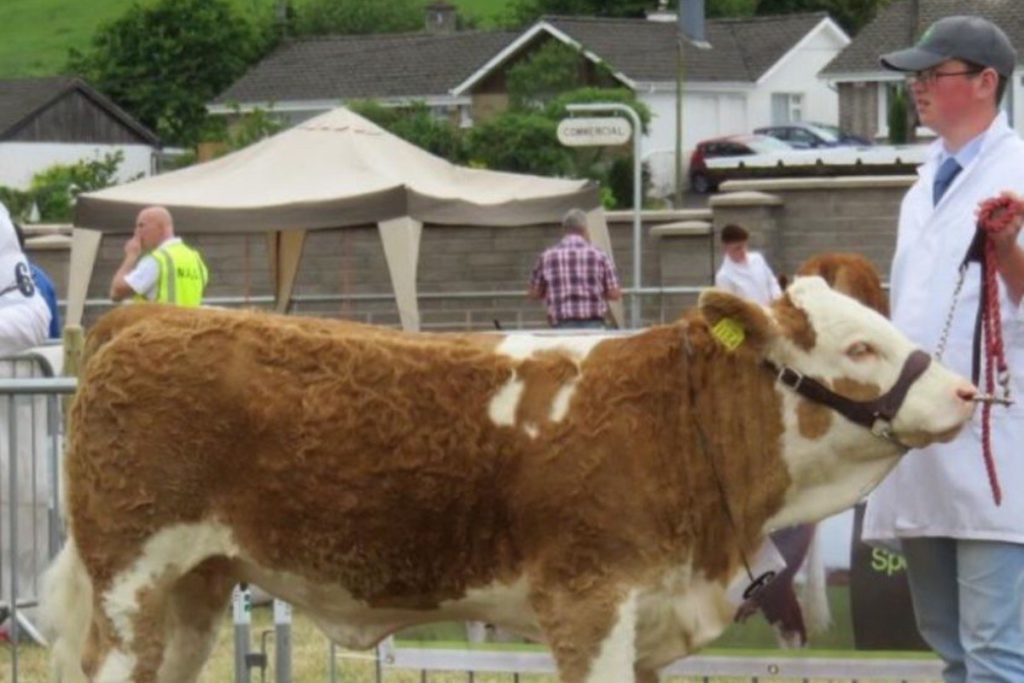 Killian has experienced successes at agricultural shows, including Dualla, Cappamore, and Charleville.

His highlights include having the south-eastern weanling heifer of the year with Suirville Kim at Ossory Show 2019 and achieving the Simmental young handler title at the 2014 Tullamore Show.

“It is a great way to promote the herd/breed, and you never know, you might sell something at the shows.”

He highlighted that grassland management is just as important as genetics and if an area of grass is gone too strong, he will make surplus silage bales from it.

“Grassland management would be very important. If I owned my farm, I would be more inclined to invest in infrastructure/fencing/pathways/lime and put in proper paddocks.”

“It can be difficult when you are leasing a farm. We are lowly stocked, so it is not a huge issue. I am not trying to push the output on the farm significantly.”

Killian believes to be successful in the pedigree field, you need to undertake “a lot of hard work, have the drive to get up early in the morning, feed/wash/bed cattle, and do the same thing that evening”.

“It is the small things that matter. You have to put in the time to get the rewards.”

Killian intends to expand to a 20-cow herd, have 20 top quality calves annually, and improve his farm.

His five-to-ten-year plan includes possibly buying a farm with a viewpoint of investing in a farm he can benefit from.

“It is all about finding the next thing and hopefully, being able to breed something to be exceptional, and maybe, sell a bull to an AI station or top the premier sales.”

“I do not depend on suckler farming. I do not see many people depending on it full-time; it is quite difficult to make a living, which is unfortunate because it is a great way of life.”

Killian outlined his view on the future of Irish suckler farming.

“There are a lot of farmers currently that will not change away from suckler farming.”

“Unfortunately, I do not know where the successors of their farms will come from.”

“While I love farming and love doing it, there are plenty of sons/daughters of this current crop of farmers that do not have an interest in the farm.”

“They have secured off-farm jobs/employment, and in fairness, you cannot blame young people for not wanting to come back farming because it is hard to justify it based on the incomes of these farms. The sustainability of them is questionable,” he concluded.