That's FarmingThat\'s Farming Irelands Largest Farming News, Properties and Classifieds Network
HomeBeefPictures: 'Working on the station was the highlight of my time in... 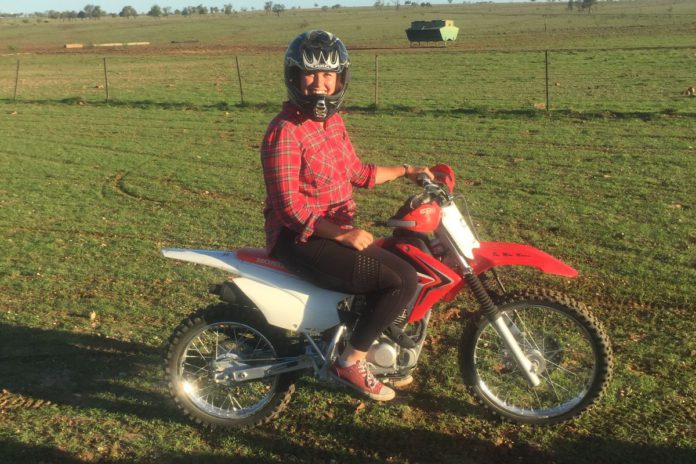 Pictures: ‘Working on the station was the highlight of my time in Australia’

Coming from a small beef farm in West Cork, I had no idea really what to expect when I accepted a station-hand job in central west Queensland, outside the small town of Tambo, writes Kate Dullea.

I knew I would give it my best shot and if I wasn’t up for it, they could leave me off. I should never have doubted myself!

I would honestly say working on the station was the highlight of my time in Australia. It was unreal. I was lucky to be working for a genuinely lovely family who understood that this was completely different for me and were more than patient with me- I had a lot to learn!

My first week there was a complete culture shock. The size of the property, the chores, the way of life – everything was so different. The two boys, aged 7 and 10, drove their ute across the property to the bus stop every morning and evening to get to and from school.

The heat and the flies were constant, and I would never have thought that I would grow so used to them both. The nearest town was about a half an hour drive away and had one food shop, smaller than any local co-op I’ve been to. The land was so dry I wondered how anything survived on it, let alone a couple of thousand cattle.

I was hired to take some of the pressure off the family who were dealing with the drought. They had to spend so much time feeding cattle – getting fodder like grape silage, grain, hay and powered minerals out to different paddocks of cattle every day because there was hardly anything on the ground to be eaten, and the return drive to paddocks could take a few hours – that smaller jobs were beginning to fall by the wayside.

I started off with jobs like feeding the poddy calves who had been weaned early (part of a drought management scheme the family were enforcing), horses, gardening lawns that had no grass, feeding the ‘chooks’, polishing tack, cleaning out the cattle-yard, sweeping out sheds after dust storms and helping out with some household chores.

One day, I made the mistake of leaving the shovel and wheelbarrow I’d been using for gardening out, while I went on my lunch break. When I came back an hour later, the handles of both were hot to touch.

I had left my sweat-soaked shirt on the veranda and that was bone dry too. That would never happen at home. That first week was the hottest, actually reaching 41ºC one day. I spent my 22nd birthday swatting flies and watching a dust storm kick up outside my living quarters – I’d never seen the like before!

Because it’s so dry, when the wind picks up, it lifts the dust off the ground and whips it around. I couldn’t see across the yard with the amount of dust in the air. Definitely nothing like the weather in west Cork! It was mad too, that I barely ever turned on the hot water tap for a shower.

The water came out of the cold tap piping hot, some days to the extent that I would have to turn it off while I shampooed for some relief. We get a storm on Friday- thunder, lightning and some rain- but the rain only falls on some of the property and really isn’t anything to write home about in terms of being anything substantial.

On the second weekend, we got some decent rain with about 160mm falling over three days, if memory serves me right. In Cork, the average annual rainfall is about 1,200mm but over here, it’s in and around 600mm, and they are currently experiencing drier-than-normal weather.

The ground turned to clay, becoming next to impossible to drive on for a few days. Even walking was a struggle with the mud sticking in clumps to my boots. The dams filled up and the air-cooled down. The aid of a helicopter was needed to deliver hay out to the cattle.

The boys and I went kayaking on the dam before the work kicked in again. The rain had knocked down wires and poles and we set about repairing and replacing wherever it was required. I was taught how to ride a motorbike so that I could help out with the next round of mustering.

Mustering is rounding up the cattle and moving them along in a mob, usually into the yards for processing. In the yards, the cattle are drafted (moved into various pens) for reasons like breeding purposed, to be returned to a different paddock if they’re in the wrong mob, calves being weaned off, older cattle to be sent to the meatworks etc.

The calves are branded, castrated if necessary, tagged with electronic ear tags and vaccinated. Some cattle are preg tested for the upcoming year, with each one handled. Others might need ear tags replaced, vaccinations or to be dosed with fly spray.

The cattle are then returned to their respective paddocks with the use of motorbike, horse and/or working dogs.

After six weeks, my employment was up, and I found work and adventure elsewhere. I returned back for a visit- 10 days of mustering a few months later in September, and this time the motorbike was replaced by Bugs the horse.

The horses were loaded up and driven out to the paddock, where we would mount. Once gathered into a mob, we would walk them back to the yards for processing, rounding them up if any got out of line. Long, hot, dusty days, but I loved every second of it.

I had grown up horse-riding but never with the purpose of working with cattle. There were a few alterations that had to be made for me – like temporarily replacing the two single reins with one and lengthening the stirrups so my legs could be nearly straight.

It was a long hack and my legs would be sore if they were too bent for the whole day. I had to be conscious of the ground. They hadn’t had much rain since I left and there were cracks and crevices’ that could cause injury to the horse if he stood in one.

A few days, the muster took so long that we would have lunch in a paddock before continuing on. I had an absolute ball.

For me, it was so surreal to be out in a paddock so big you couldn’t see the fence lines, to be on horseback rounding up cattle, working alongside people with cowboy hats and excellent horsemanship skills. It felt more like I’d been transported into a movie rather than this was my actual job.

When a young animal would break free from the mob, the others would encourage me to round him up, laughing at my feeble attempt as the animal returned to the group on their own.

There really is nothing quite like sitting atop a horse under the hot sun in a pair of jeans, with a two-way radio holstered to your chest and a mob of cattle ahead of you to make you realise what living the good life is all about.