‘I sell little or nothing through the ring’

It’s June 2020 for the Rare Breed farmers, and as the Coronavirus pandemic continues, the cycle of farming goes on.

It’s peak silage season, and even though animals are outdoors, there are still lots of jobs to do in the next episode of ‘RARE BREED – A Farming Year’ on UTV, Tuesday 16th February.

Near Randalstown in Antrim, James Alexander is in the midst of selling cattle. He produces in-calf cows to sell to other farmers. He cancelled his cattle sale, but he’s been able to sell online and to regular customers.

It’s time-consuming, but he’s glad he has been able to do it, commenting “sales have never been better.” He prefers selling from home, saying, “I sell little or nothing through the ring.”

Later in the episode, James is showing around a visiting farmer from Scotland, Hugh Dunlop, who has been buying cattle from James for a few years.

The Preston family from Gortin has brought their sheep in from the fields for a shower and skin treatment.  June’s warm weather has raised the risk of maggots caused by flies laying eggs on the sheep. It’s essential the time is taken to prevent any problems.

Kenny’s glad to get them showered, but points out that sheep are a full-time job, “Someone said to me once, when you’re not working with sheep, you should be!”

They are also picking lambs out for sale in Lanarkshire, Scotland, hoping to get a reasonable price for ram lambs, given the money invested in their upkeep and care.

Near Comber, Emily McGowan is visiting Gabbie’s nursery, from where they buy their seedlings.  Emily says it’s important for traceability purposes, and every seed sown in the massive greenhouses is sown to order.

Trevor Gabbie has been supplying the McGowans for over 30 years, and Trevor likes to think that his processes and quality get better every year, due to the attention to detail that’s taken.  They both laugh at the unusual names given to some of the varieties!

June’s changeable weather means that the best-laid plans go awry. Near Ballygawley in Tyrone, accountant and farmer, Des Kelly is working on the hoof as he figures out how to get the day’s to-do list done. We meet Jack, the Donkey who “mooches about with the cows”, and hear about his underperforming bull.

While the rain pours down, he and farmhand, Rodrigo, make repairs to some of the machinery. Des is keen to highlight how dangerous farm machinery can be, and that they only have guards off to make the repairs. 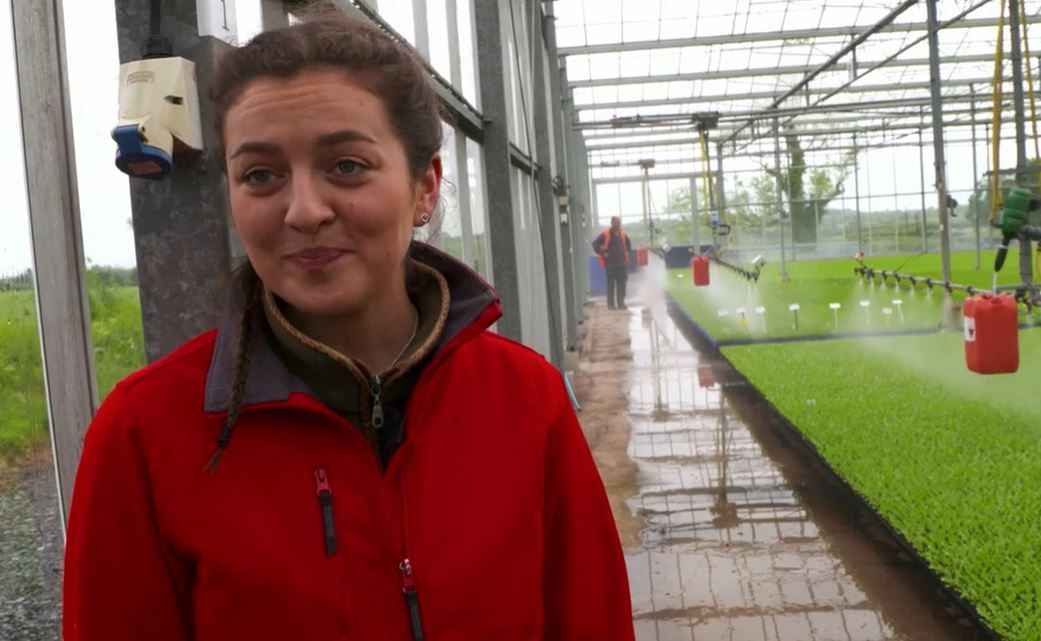 Back in Gortin and Kenny, Janice and Zara Preston are preparing sheep for a virtual show. These replaced the usual country fairs in 2020. But arguably needed more effort as the farmers tried to get the best photos and videos of their prize animals!

Kenny explains, “You like him standing like a kitchen table,” which is easier said than done!  Zara gets a sloppy kiss from one of the rams as she attempts a close-up picture! Kenny says, “It’s like Faulty Towers!” as they only have another 10 to photograph!

The episode closes back in Randalstown with Mya Alexander also taking part in a virtual show for the Northern Ireland Limousin Cattle Club.  She is posing for lots of pictures so that they can send two for the competition.