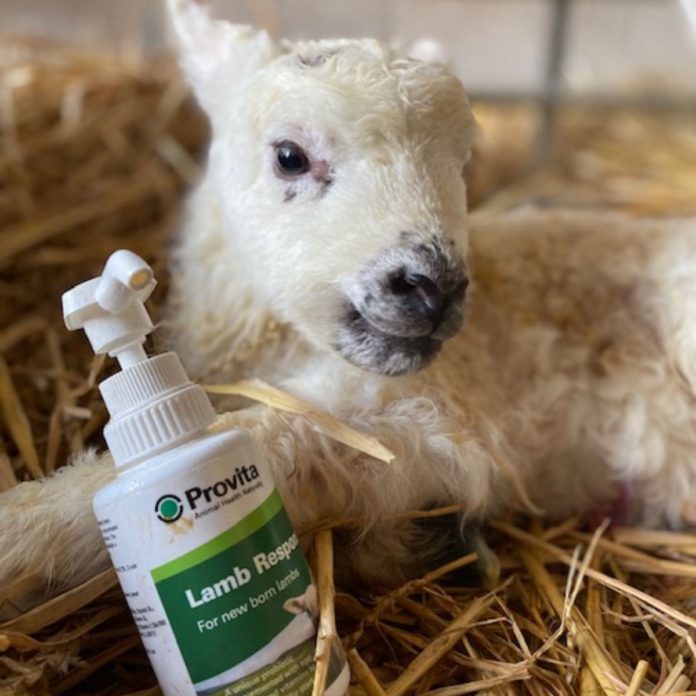 Probiotics in lambs can increase immunity and reduce watery mouth

Reports show that estimates of pre-weaning mortality range from 10-28 % and that most of the mortality is in the first three days of life across all breeds and production systems.

Newborn lambs require 10% of their body weight in colostrum within the first 24 hours of life, after which the gut is no longer able to absorb the antibodies that help prevent disease.

Several sources of UK/Ireland lamb mortality data over the past 30 years find average mortality rates of 12-23%.

There is significant variation in levels of losses between farms, for instance, 15% lamb mortality has been reported in Welsh flocks, and a UK wide study found a range of 4-21% in lowland flocks.

As mentioned previously, almost half of this mortality is caused by E. Coli (Watery Mouth).

One such scientific evidenced-based approach is to use proven probiotics in newborn lambs to protect the gut against E. coli to boost immunity until weaning, and to generate better growth rates.

The gut microbiome of the lamb governs health & immunity

The optimised gut microbiome is now known to be the director, not only of gut health and protection against E. coli infection but also of general immunity in the body.

Medical research shows the beneficial effects of quality probiotics on good bacteria (commensals) of the gut and an additive signalling effect from the gut commensals to the immune system via short-chain fatty acids (SCFA) and other signalling molecules.

In essence, there is a healthy “cross-talk” existing between the gut and other parts of the body because of an optimised gut microbiome facilitating local immunity in the gut by counteracting E. coli, but also protecting the respiratory system, the brain and other body compartments.

This recent scientific evidence clearly underpins why in the Provita Protect field trials, the treated animals displayed not only a significantly lower incidence of E. coli scour but also a lower incidence of respiratory disease.

An optimised gut microbiome in lambs will have a higher portion of commensal organisms if acted upon directly by a proven and quality probiotic.

This probiotic-enhanced gut microbiome, as discussed, is proven to boost the overall health of newborns.

This new concept explains not only the healthier gut and lower incidence of scours seen with a licensed probiotic such as Provita Protect, but also explains the significantly better growth rates seen as a bonus when calves receive Provita Protect.

Similar growth rate improvements have been reported with probiotics in lambs, together with a reduction of E. coli scour and better immunity.

The gut of the foetal lamb is sterile in the womb and is only very slowly colonised after birth.  Thus, the newborn lamb has little or no gut based immunity and is highly susceptible to E. coli infection (Watery Mouth).

A severe challenge by environmental pathogens such as E. coli can easily override this weak and minimal indigenous commensal population in the newborn lamb. 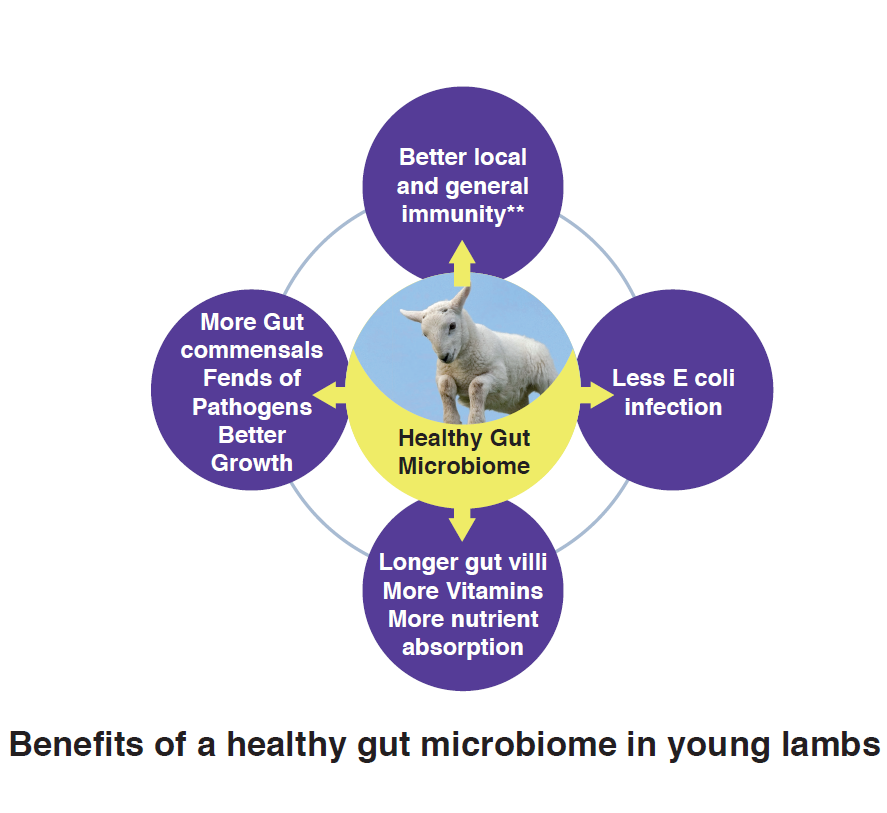 The resurgence of interest by veterinary surgeons in proven and effective probiotics as alternatives to antibiotics in lambs and calves has been triggered by a number of recent issues.

Why the lamb benefits from lamb response

Lambs rely on maternal colostrum for passive immune protection because they are born immunodeficient.

Furthermore, the role between commensal microorganisms and host interaction supports the hypothesis that gut commensals play a key role in immune training.

Even with support from maternal immunoglobulins, lambs still exhibit high mortality rates, hence, implementing early and effective supplementation of the gut commensal population with Lamb Response is of critical importance.

An enhanced commensal gut microbiome will boost lamb survival and reduce digestive disturbances in the gut, thereby reducing diarrhoea incidence by virtue of the anti-pathogenic, gut-based action of probiotics.

Provita Lamb Response is a beneficial bacteria-based oral supplement which acts preventatively to augment the gut commensal population of the newborn lamb with protective bacteria, thereby generating gut health, and preventing the establishment of E. coli by boosting immunity.

This product also supplies protective egg proteins and B vitamins to further enhance the gut, and to stimulate metabolism and growth.  Young lambs can also be very susceptible to hypothermia, loss of energy, and deficiency of vitamin E and selenium.

Supplying egg proteins, energy (glucose) and trace elements such as vitamin E & selenium immediately after birth will not only kick start the metabolism of the newborn lamb but will also aid its survivability.

For example, by using a complementary product such as Provita Jump Start.  This will act in synergy with the beneficial bacteria in Lamb Response.

Proof of efficacy of probiotics in newborn lambs

Lambs fed a probiotic mixture of Lactobacillus acidophilus and Bifidobacterium animalis , showed the highest humoral, cellular, and antibody response when compared to untreated controls (given no probiotic).

Other published experiments investigated the effects of probiotics on the young lamb’s immune system and the subsequent antibody response to vaccination.

“Effects of Age and Probiotics on Immune Response  in Lambs”

Ref: Effect of Age and Probiotics on Immune Response in Lambs. Honors Thesis by Haley Scott May 2018.  Presented to the College of Agriculture and Life Sciences, Animal Science of Cornell University

Using a probiotic mixture of Enterococcus faecium, Lactobacillus acidophilus, Lactobacillus casei, and Lactobacillus plantarem fed to young lambs, found that experimental data suggested that as the beneficial commensal organisms became established and maximized in the lamb’s gastrointestinal tract (via probiotics), they contributed to an enhanced immune response in lambs.

Trends in his experimental data pointed to the likelihood that probiotic administration lead to earlier and higher levels of specific antibody production in response to lamb vaccinations.

This paper studied the effects of feeding a probiotic (L. casei) and a prebiotic (inulin) to newborn lambs for 56 days until weaning with particular reference to the overall performance, health, weight gain and E. coli incidence in the treated young lambs. 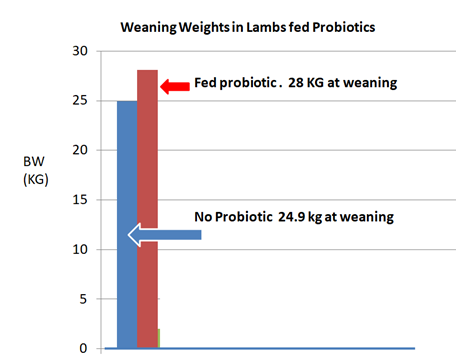 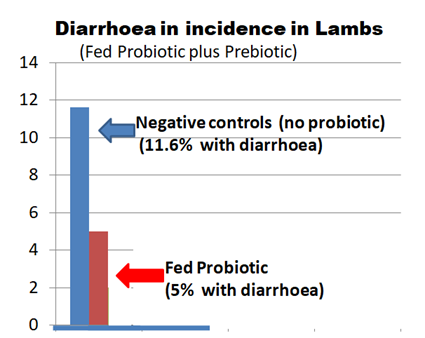