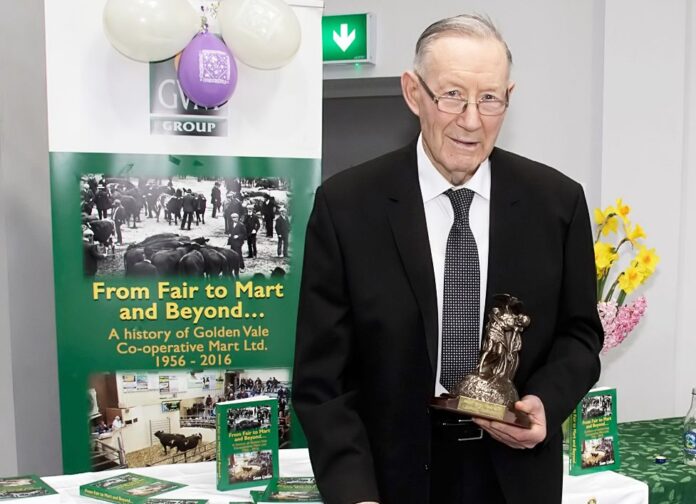 The Lisheen, Kilmallock, Co. Limerick, has been recognised for his “exceptional, lifelong” contribution to the Irish co-operative movement and his local Golden Vale Mart Co-operative Society.

He was elected onto the first committee of the society on its inception in 1955, at the age of 21. He served with “distinction” in the intervening years.

The committee, at that time, secured a site in Kilmallock, Co. Limerick, raised the necessary share capital, built a mart and held its first sale in June 1958.

Over the decades, Golden Vale Mart (GVM Group) has developed into a modern and diversified group.

It operates multiple livestock marts and has branched into property auctioneering, investment and development, and renewable energy.

For over 60 years, it has maintained its co-operative structure and ethos.

Today, it is a multi-faceted business with shareholder funds of over €24 million and around 5,000 shareholders.

On the passing away of his father in 1949, a then 15-year-old Clement took on the running of the farm, together with his mother, to create a successful mainly dairy enterprise.

Becoming involved in the direction of GVM in his twenties, he served in a voluntary capacity on the board of GVM from 1956 until his retirement in 2005.

As a board member, he played a “critical” role in guiding the society towards many opportunities and through occasional challenges.

This included “steadying the ship” when the group’s meat factory business had problems in the 1970s.

Besides, McAuliffe served as chairman of his local IFA branch for 10 years and served on the local advisory committee of Golden Vale Creameries for a number of years.

To this day, he still takes a “massive” interest in the society. He rarely misses the weekly sales at Kilmallock Mart, where his son and namesake is now also on the Kilmallock advisory committee.

Since the first AGM of Golden Vale Mart in 1956, Clement has attended over 60 Annual General Meetings of the society.

“He is an exemplar of the best characteristics of personal dedication to the ideals of co-operation – achieving better farming, better business, better living for all – through co-operative enterprise.”

“He overcame significant adversity in his formative years, developing a bank of skills and knowledge in farm management and demonstrating a great personal zeal and initiative, which he then brought into effect very meaningfully for the benefit of Golden Vale Marts and its members for over six decades.”

Long said he is “a truly admirable” person who has “given selflessly” in his service to the cooperative movement for the betterment of farming, neighbours, community, county, and country.

“It is an honour for us to recognise this by presenting him with this prestigious national award,” Long concluded.

- Advertisement -
Previous articleCull cows to €2,320 and bullocks to €2,200 at Carnew
Next article€70/meeting for KTG scheme participants