That's FarmingThat\'s Farming Irelands Largest Farming News, Properties and Classifieds Network
HomeBeef‘My arrival on this farm was a culture shock for me’ 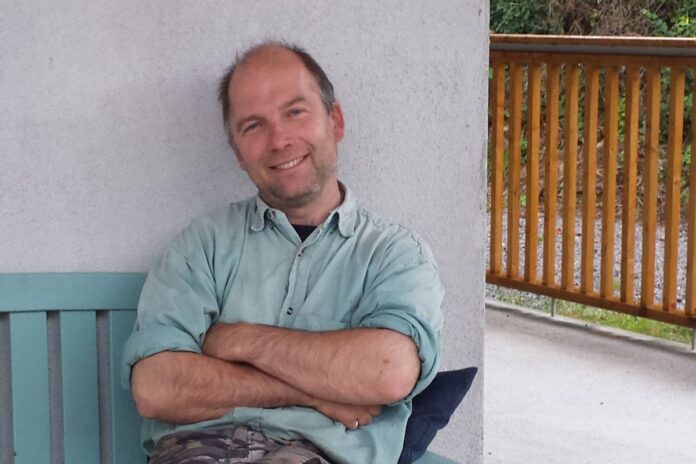 “I live in Durrow, Co Laois, on the farm with my wife, Alison Duck and three children.

However, I am originally from Dublin until 2000 when my uncle, Martin Blake, asked me to take over his farm as he wanted to retire as he had no family of his own.

I did not grow up on a farm per se. Living on the edge of Dublin with a few fields that were rented out to a farmer, I was used to seeing cattle around and a few sheep but had no real idea of the reality of raising them.

I have cousins who farm in Meath, and we used to visit them occasionally, but I am not sure that improved my knowledge in any way.

My arrival on this farm back in January 2000 was a culture shock for me, as I was used to being able to cycle into Dublin and meet up with friends and the like.

On occasion, I have likened it to moving to the set of Father Ted. This is probably unfair, but at the age of twenty-four, it had the feel of it.

Education involved following around the man whom my uncle employed to work on the farm as my uncle tended not to do much physical work around the place, being hampered by fairly serious depression.

After a while, I was sent off to Gurteen and Athenry to attend the 180-hour residential Green Cert course.

We are lucky to be living and working on what was once a small estate back in the day set amongst the rolling landscape of Co. Laois near Durrow.

It is a good size at 250-acres and very picturesque with big old trees and bits of old woodland.

On my arrival, the farm was not overly taxed with about 100-acres of tillage, finishing about 70 drystock cattle and about 250 hoggets.

Over the years, we have reached the stage of about 40 ish acres of tillage, 30 suckler cows and about 130 ewes. Currently, we sell some of the cattle as yearlings and finish the rest.

Over the years, I have been replanting an orchard of about 40 mixed varieties of apple trees which Ali, my wife, has bravely taken on.

Some years back, we started getting the apples juiced, which we then sell in a couple of local outlets as well as in our own farm shop.

What started as one of those, “it will be nice for the kids to have some hens and eggs for the house,” has now become about 30 hens and selling the eggs to the Fruit & Nut shop in Portlaoise.

Farm labour consists mainly of myself and Ali with occasional local help.

We also take agricultural students from France and WWOOFERS who can be of great help, obviously depending on the person.

My main aim in taking on this place at the beginning was to have the best organic farm that I could have.

That aim has matured over the years to building something sustainable, to enhance what is here and, hopefully, build something which will last.

Mind you, that last part will obviously depend on our children and what they want. 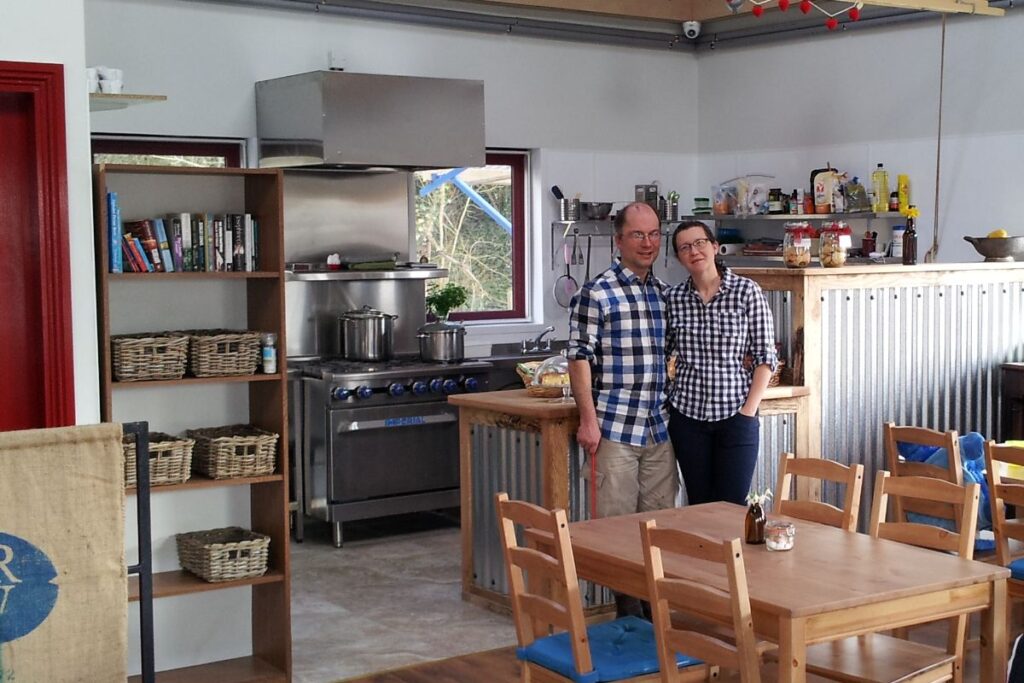 There have been numerous challenges over the years: the weather, prices, the weeds, and our health.

The last was one of the biggest challenges for me after a very negative encounter with a newly calved cow back in 2010.

The other challenges we have got over or just managed to live with. There are days when the monotony of farm life can become a trial with the daily routine of feeding, checking, fencing, and maintaining everything.

The cycle of the year tends to repeat with winter housing, spring birth and planting, summer silage and grass topping, followed by autumn harvesting.

This is all accompanied by feeding and finishing animals to try and bringing in enough money to keep the show on the road.

Saying that, there is enormous satisfaction when calving and lambing go well, when a crop grows well and yields a good harvest.

Ongoing challenges will be the weather and the economics of living in a world with reduced resources.

Juggling everything, we are doing on the farm has become the most challenging aspect of it as there is always stuff waiting to be done with the danger of Ali and I becoming stretched too much, also of some things not being properly done.

Finding people to come in and do jobs is also getting more difficult.

When I started converting to organic in 2001 with IOFGA, I continued the system in place when I arrived with buying and finishing weanlings.

This involved trekking around the country to look at stock, which resulted in a very mixed bag.

There were quite a few fewer organic farmers 20 years ago, and there were a number of wasted trips to find what I did not see as suitable cattle.

Sucklers began by keeping some of the weanlings bought for breeding, but as time went on, I started to favour the Simmental cow for milk and size as I was putting them with an Angus bull.

I used to AI some of the cows for replacements which had mixed successes. Furthermore, I did not really want to be finishing Simmental bullocks as I found they required a lot more feed.

A Simmental bull was bought, and we started selling Simmental yearlings while finishing some Angus cattle. I find that Simmental cows, while being good with milk and size, are large and eat appropriately.

The latest change has been to buy a Stabiliser bull with the idea being to breed replacement heifers from him, producing a herd of smaller cows over time.

I think this will be more sustainable and easier to manage with much hardier calves. 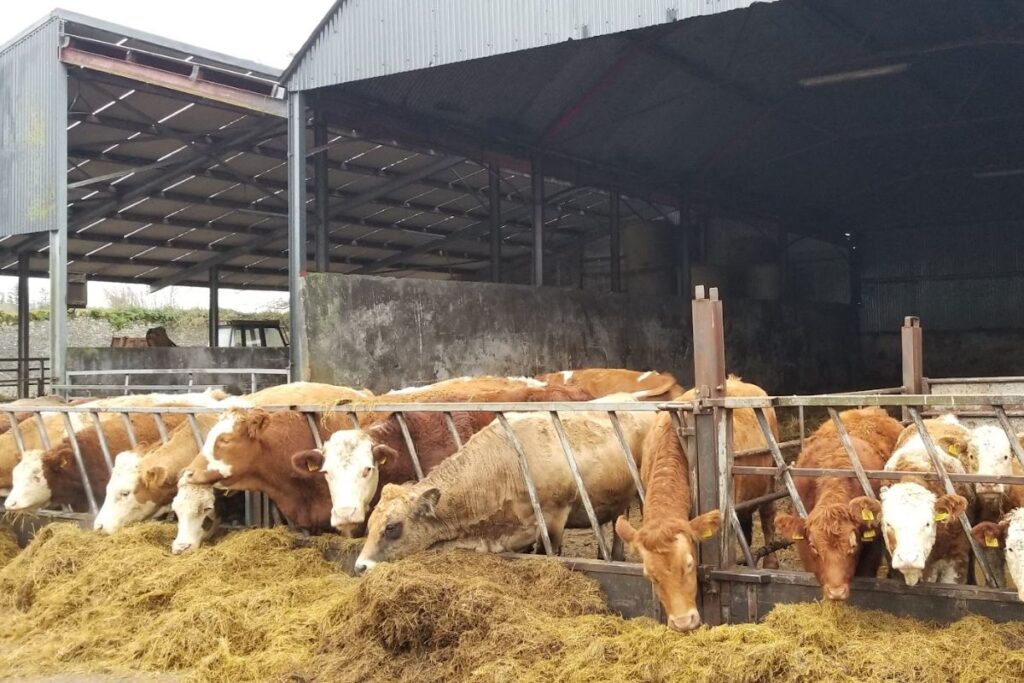 Our flock of ewes started with about 40 Belclare ewe hoggets being bought in 2001 and building up numbers over time.

We now have about 130 ewes, depending on the year, with two Belclare rams and two Texel rams.

Lambing is in April for weather and grass reasons. We sell most lambs as hoggets over the following winter when the price has usually been reasonably good.

Being organic has complications too. Trying to maintain and improve the soil we are dependent on, all the while exploiting its fertility.

The importance of rotation has become increasingly important to me with the necessity of cover crops, green manure crops and a varied sward.

Having always been interested in the environment when younger, with a strong involvement in the Green Party in my early twenties, the move to organic farming was only natural.

There are occasions when the lack of chemical inputs can be difficult though mainly with tillage. It can be disheartening to see crops overrun with weeds.

There are available organic methods such as interrow hoeing but dependent as I am on contractors for the tillage work, it does make that challenging.

Mainly we have got away with living with some weeds though charlock has become more of a problem with the increasingly dry summers meaning crops do not tend to shade them out fast enough. This is an ongoing challenge. 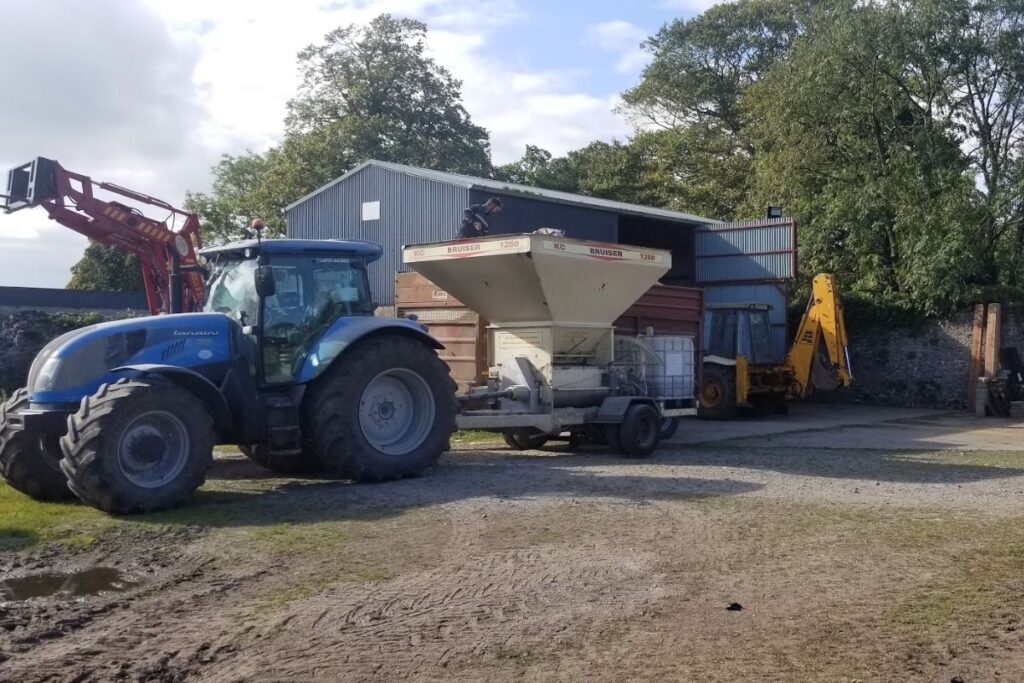 Organic tillage has been and continues to be inadequate in Ireland, with few enough organic farmers growing a sizeable acreage of crops.

It was something I realised early on was a necessity with the cost of organic feed, but of course, we are lucky to be farming in a part of the country suited to tillage.

Crop history has been interesting, with early attempts at protein production resulting in incredibly varied crops of field beans from about 0.5 to over 2 tonnes to the acre.

The last fifteen years have seen combi crops grown for feed production, with the most successful being a field of oats, barley and peas and a field of wheat and peas.

The last while has seen the harvest rolled and treated with propionic acid for ease of storage.

Along with growing our own feed, we have also been growing around 20-acres of oats to fill a contract with Flahavans.

This has become a cash crop for us which generally covers the expense of sowing organic seed, which has become increasingly expensive.

This is not helped by higher transport costs as most of the seed is imported either from the UK or Europe.

Prices have been very good the last two years, which has helped. In general, prices for organic animals in the factories are better but not always by an awful lot.

It has varied considerably from about €2 over down to €0.50 – depending on supply and demand.

It has to be said, I think, that organics in Ireland is limited by the market and the number of processors who are interested in selling into the organic market.

The optics of having a larger number of organic farmers might look good but may not be sustainable economically.

In the past, lip service has been paid to the organic sector by various governments, with Green Party involvement giving it a boost.

If the market is not there, the wisdom of growing the sector is very debatable.

Organic products cost more to produce, and with money becoming tighter with inflation rising, the average consumer will baulk at the higher cost of those products in the shops.

In 2015, we did open our farm shop and tearoom with some processing facilities for meat. It’s a business which Ali agreed to take on and has turned into nearly a full-time job as the production of jams and cordials has increased over the years.

We open the shop/tearoom on Friday, Saturday and Sunday, which is enough as that takes a lot of work on its own.

We have mainly pork and lamb on sale there with some beef occasionally, and I currently make a range of burgers, sausages, and cured pork products for that.

Lastly, in time, I am looking at increasing the tourism facilities on the farm to include more accommodation, which is a work in progress.”