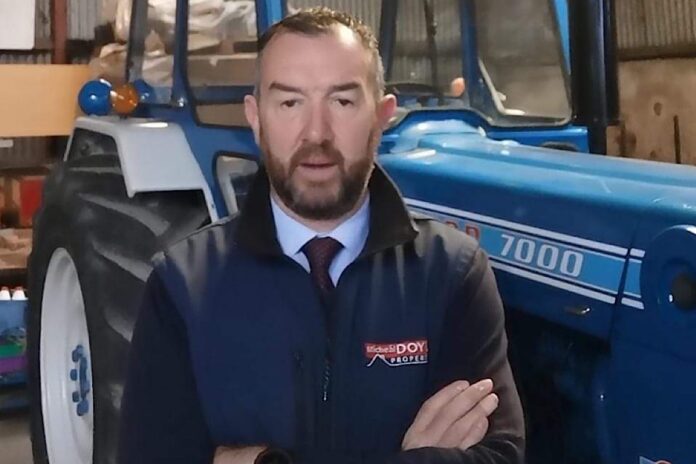 As part of this week’s On the Rostrum series, That’s Farming speaks to Micheal Doyle Properties. Micheal, an auctioneer, discusses his keen interest in machinery, adapting to selling machinery online via MartEye, achieving up to €70,000 for a tractor and the difficulties he faces in sourcing machinery.

In 2005, Micheal Doyle from Tankardstown, County Carlow, applied for his auctioneering licence and later established offices in Carlow and Tullow, with 90% of his work initially focusing on land and property sales.

Micheal completed his licence through IPAV (Institute of Professional Auctioneers and Valuers) and PSR (Property Services Regulatory Authority) in IT Tallaght two nights a week for two years.

He grew up on a mixed enterprise and today buys up to 60 Angus weanling heifers for his 60-acre farm that he finishes the following year for ABP Waterford.

According to Micheal, this machinery auction brought over 3,000 people to the sale yard with 500-600 registered in-person bidders.

“We had auctions at home, and we then did different auctions in Cork, Roscommon, and Mullingar. We got a name and got going at machinery auctions, and then one thing led to another.”

“I was always interested in auctioneering. I am 50 now, and I remember going to farm clearance auctions during my youth.”

Micheal worked for his local agricultural contractor, Patrick Nolan, as an operator drawing silage, which contributed to his “keen interest” in machinery.

Furthermore, he worked in Co-Operative Animal Health for five years as a sales representative and FBD as a regional manager from 1999 to 2005 in his local Carlow Tullow Branch before venturing into auctioneering.

He furthered his knowledge in agriculture and business by completing his Green Cert in 1991 at Multyfarnham Agricultural College and undertaking a two-year business strategy course the following year in Carlow Regional Youth Service.

Micheal runs his business with his wife, Caroline, who completes bookkeeping, and his sister, Helen, who undertakes accountancy work alongside other family members who assist during sale nights.

In October 2019, Micheal installed MartEye’s software to conduct his machinery sales alongside on-site bidding, which he described as a “huge success”.

The Carlow auctioneer did not conduct any machinery auctions before this until Saturday, March 14th, 2019 – due to the first Covid-19 pandemic lockdown.

Furthermore, Micheal decided to bring the auction online only in December 2019 and did not carry out any in-person auctions since this date.

Before using the online system, Micheal undertook 14 machinery auctions annually, with today a monthly auction and several clearance sales and a focus on sourcing farmer-owned machines for his audience.

The success of online sales

Micheal believes the success of his online machinery auctions is down to the accessibility of the online system and the ability to undertake an auction during different weather forecasts.

Speaking about hosting his first online auction, he said: “We could not believe the number of people registered to bid and people who did not view the items.”

“We were worried before the auction because people had not come to look at much, but it turned out to be a brilliant auction.”

“The elements were a huge factor. If you got a bad day, it was a disaster, and people would not wait around, whereas, with the online system, a bad night is what you are looking for as people are in earlier and sitting in at the fire.”

“In my view, the hardest auctions with the online system are the summer ones because people are still working.”

Micheal said trading online has “opened a lot of doors for him”, with 300-400 registered bidders nightly and his customer base quadrupling ten times more.

According to Micheal, the firm’s instructions on Monday, March 21, 2022, to conduct a machinery dispersal sale for Liam Tobin resulted in his “biggest” sale in 15 years.

The filler lines you may hear Micheal say on the rostrum include “mint machine”, “minter”, or “rare items.

Micheal believes the online system is “the only way to sell machinery”. “Every day, people are saying to me when are we going back to the live auctions that they are much better.”

“In my view, they are better even for me with the whole comradery, but they are much better if you had a crowd there and a fine day.”

“75% of our stock on a normal auction night online is going 250 miles away, turnover is tenfold, and it is purely to do with the online system. I could go back to the live auction, but I would not have anything like I had before the online system.”

According to Micheal, the company has completed its auctions by private treaty since the Covid-19 pandemic. Still, he has not ruled out branching into online selling in the future.

“In my opinion, good land is still making huge money. In even Carlow, Kilkenny or Kildare, good land is up the bones of €20,000/acre; it is mad. It does not seem to be going down in price at the moment. Land sales locally are scarce enough.”

On the property front, Micheal has sold residential homes for up to €600,00, with his focus on one-off homes and countryside properties.

“I definitely see more teenage girls coming into the property side of auctioneering. I suppose 15-20 years ago; there were very few female auctioneers.”

“In my opinion, they seem to be better and are probably better, and maybe more people are dealing with them selling their houses and prefer it.”

“We wondered if we missed the boat with oil prices, but it went very well for the simple reason, new stock is gone so expensive.”

“The cost of new machinery is mad. I know farming is going well. In my opinion, getting new machinery is a problem. Machines are just not there to be got, even if you have an open cheque book to buy a spreader in the morning.”

“In my view, it is a funny old market now, and people seem to be as happy now to buy a good second-hand machine.”

“I feel new machinery, including tractors and harvesters, is gone silly money. Steel is also going up and up in price.”

“The problem I may have come across is acquiring stuff to sell. For example, I need to sell new second-hand machinery to generate money, whereas if people are not going to upgrade and change machinery, that might not happen.”

Looking ahead to the future of Irish auctioneering, he believes that the bigger franchise businesses have the market “sown up” but also stated these companies also have their challenges.

“In my view, auctioneering has become very regulated, which is good. However, I suppose the economy will depend on a lot and what will happen. I think it being more regulated has given it a better name. For example, sure, years ago anyone could get a licence and away you went.”

“I think now, with modern technology and cameras, it is a little more transparent for people to see.”

“I do not know if there will be massive changes in auctioneering. I suppose as long as the market does not dilute as you do not want a lot of auctioneers to make a lot of money,” the auctioneer concluded.

- Advertisement -
Previous articleSetting the sower and post-spreading care
Next article7 tips: Act now to improve feed security on your farm