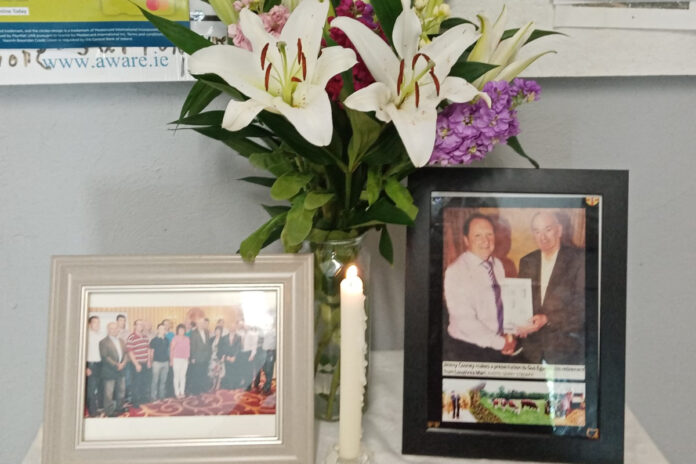 ‘He dedicated his life to Loughrea Mart’

During one of its recent sales, Jimmy Cooney, the mart’s current manager, paid tribute to Egan, who “spent 40 years of his life at Loughrea Mart”.

Management and staff observed a minute’s silence for Gus, who served as secretary of the mart and later secured an administrative role before he was appointed manager.

Cooney said: “I think you will all agree that he did a good job at Loughrea Mart. He dedicated his life to Loughrea Mart and served as manager for forty years.”

A spokesperson on behalf of the committee and staff of Loughrea Mart said:

“A founding member of Loughrea Co-operative Mart, Gus worked tirelessly for the mart and the farming community. He devoted most of his life to the business. Thanks for the memories. RIP,” the spokesperson said.

Tributes have continued to pour in online through RIP.ie. One wrote that “he championed people management in his long involvement with Loughrea Mart”.

Another explained that “his passing brings back a lot of memories of his time in the mart, buzzing busily about the place”.

Another wrote: “I have great memories of working in Loughrea Mart, with Gus at the helm for almost 50 happy years. He was a maestro at resolving farmers’ issues in his own inimitable way.”

Joseph Kinsella of Baltinglass Mart and Helen Kells of Carrigallen Mart were among those who paid tribute to Egan.

He said: “Sincere condolences to Mae and the Egan family on the passing of your husband, father & grandfather.”

“He was a kind and able chairman of ALM for many years. We were so sorry to hear of his passing. May his gentle soul rest in everlasting peace,” he concluded.

Helen Kells of Carrigallen Mart said: “Deepest sympathy to Mae & family on the sad passing of Gus, an absolute gentleman.”

“I really enjoyed the mart trips that I attended and was so lucky to have got to know Gus. May he rest in peace,” she concluded.

- Advertisement -
Previous article13 tips: ‘Use a slow tractor speed to produce well-packed bales’
Next article8 essential steps to bringing a new dog into the farm