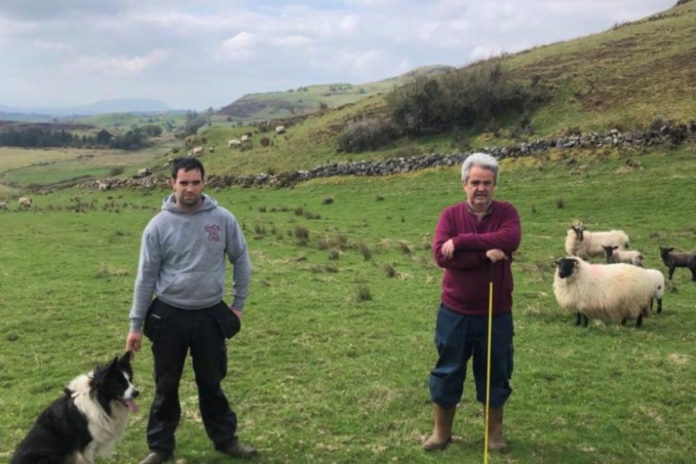 The Comiskeys calve ten of their cows, which are mainly Simmental-cross-Limousins from November 15th, while the remainder follows in February and March.

Usually, their focus is to sell progeny as store weanlings in Manorhamilton Mart or Dowra Mart. The nature of their enterprise was altered this year, however, as a TB outbreak caused the duo to adjust their system to finishing bulls.

“It was the first year I have tried it because I went down in July of last year and wasn’t clear until January.”

“They took a lot of meal, around 1.3 tonnes-a-piece, along with silage, but I was satisfied enough with how they sold in the end,” he explained to That’s Farming’s Cian.

The breeds of sheep on the farm are usually based on Cheviot, Blue Leicester and Lanark genetics for store lamb production, but Jason decided to experiment this year with a focus on producing lambs for finishing.

“Jason decided to buy a pedigree Charollais ram and we put him out early with eighteen Suffolk-cross ewes to see how they would do.”

“We lambed them in mid-February and we had a very good return on them, with fourteen twins, one triplet and three singles.”

“We trialled it with a few of them last year and we thought it was quite good, so we tried it again this year and it seems to have been a good idea.”

Despite their efforts to increase productivity by experimenting with different systems, Comiskey still feels that hill sheep are not rewarded enough for their contribution in maintaining the hills and marginal areas.

He told That’s Farming that he often refers to them as “the custodians of the hills”, with even the wool on their back acting as a carbon collector.

Issues and concerns like these, along with many others, are the reasons why Kevin first became involved with the IFA. He said that, like any other industry, farmers need representation and someone to “fight their corner”.

His involvement in the farm organisation began about two decades ago at local level, before progressing to county and national levels; he was later unanimously voted as national sheep vice-chairman.

He now hopes to use his role to fight for greater support for sheep farmers. “We’re fighting for a €30 payment in the new CAP in order to support the sheep farmer. We feel like they’re not being rewarded enough along the western seaboard.”

“The quality of lamb in the area has really improved over the last number of years and now it needs to be promoted to get a better price for it.”

Comiskey declared that “live exports are the way forward” for the sheep and cattle industry. He tested this idea by exporting his own lambs to Spain in recent years, but unfortunately, the venture didn’t bear fruit.

However, he still believes it could be viable given the right support and marketing. “Live exports are the only way forward because if the cattle throughput in the meat factories goes over 27,000-28,000 thousand in a week, the prices come down, and there are often weeks where it reaches 40,000.”

Previously, there had been a good market for live exports to Northern Ireland and the U.K for northern counties, according to the IFA representative, but this has “dried” up in recent years.

The Leitrim farmer believes that the Department should address this and look to reopen the UK market. “We have to rely on exports. Only around 30% of the sheep we produce is consumed at home, so we have to export it.”

“The UK is the nearest neighbour and the easiest to access,” he concluded.

- Advertisement -
Previous article
QUIZ: Who really knows their sheep prices?
Next article
Weather: A mix of cloud and sunny spells