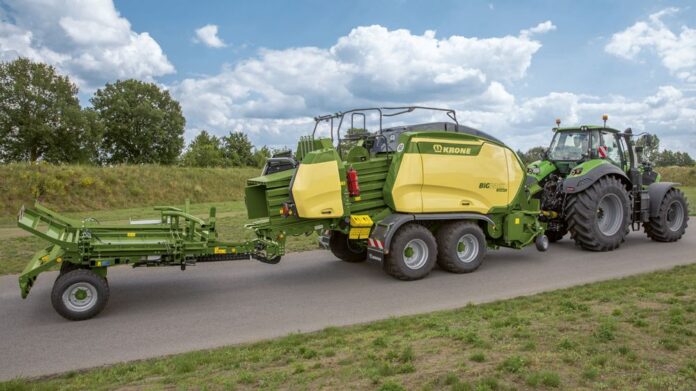 Krone has unveiled its new GPS auto feature of its BaleCollect bale accumulator.

According to the firm, this new GPS auto feature makes bale handling much easier and more convenient.

It allows the accumulator to automatically deposit the bales at right angles along pre-set virtual lines.

In brief, the firm says this is “the smarter way” of collecting and loading square bales “in the fastest possible way”.

So how does it work?

The bale accumulator is attached to the baler to collect bales as they leave the baling chamber.

To ensure safety on the road, KRONE has designed an innovative attachment via the telescoping drawbar. For road transport, the platform folds into a compact unit of less than 3 m. Then, the drawbar extends, and the castering wheels/axles are “made rigid”.

This allows BaleCollect to track reliably behind the baler – for safe journeys at high speeds of up to 50 km/h and through narrow gates.

Furthermore, the combination travels the field’s perimeter, recording up to five A-B lines along which BaleCollect will deposit the bales during harvest.

The single big advantage of this technology, the firm believes, is that it deposits the bale transversely to the direction of travel and along the recorded lines for:

In the past, operators had to trigger the unloading function manually – to the effect that naturally, they did not deposite bales along straight lines.

The GPS-controlled auto depositing feature saves time and costs for bale transport. The feature unloads the bale across the direction of travel for efficient bale handling and collecting.

According to the company, the benefits include:

According to the firm, BaleCollect platform can store up to three bales that leave a 120 cm chamber or up to five bales from an 80 cm chamber.

“When a bale leaves the chamber, a bar pushes it to the right or left side. This clears the way for the next bale to enter the platform.”

“Lastly, all bales are automatically pushed off the platform according to the unloading mode that the operator selects,” the spokesperson concluded.

- Advertisement -
Previous article
Prices from €5 to €2,810 in ‘buoyant’ trade at Castlerea
Next article
VIDEO: Farming oysters on the west coast of Ireland