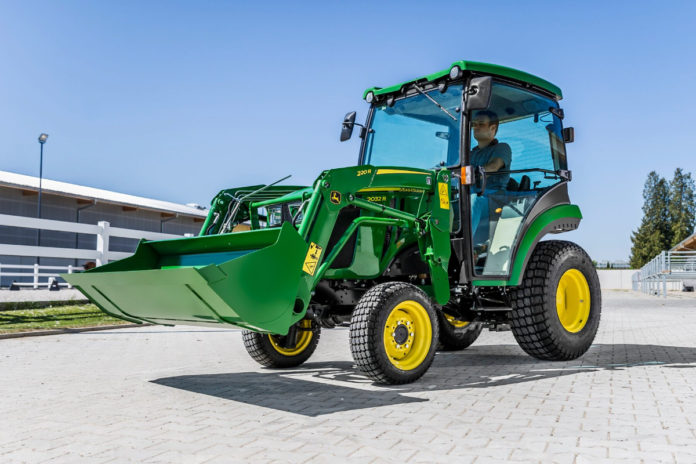 John Deere has announced a number of new and exciting updates to its series of compact tractors.

The range includes 13 models in 6 series, ranging from 25 to 66 horsepower.

The main change has been prompted by emission regulations in Europe, which limit ultrafine particulate emissions in all engines above 25hp.

The range of tractors below 25hp already meet these standards, but key changes have had to be made to the larger models in the series.

2R and 3R series with more than 25hp have been fitted with a new Yanmar 1.6-litre, three-cylinder TNV Series diesel engine that features a high torque reserve, providing plenty of power under heavy loads, according to Deere.

The latest technology in the engine improves fuel economy, control and accuracy, while also reducing environmental impacts as well as operating costs.

The company have stated that it features a common rail system (CRS) and an electronic control unit (ECU), which continuously monitors engine conditions and adjusts fuel delivery to ensure optimum performance.

The engine’s after-treatment system is similar to that of the larger John Deere agricultural vehicles, which uses a diesel particulate filter (DPF) and diesel oxidation catalyst (DOC). These features operate automatically to produce lower levels of exhaust emissions and meets current emission standards.

For the larger tractors in the series, the 4052M and 4052R, they have received a larger 2.1-litre, four-cylinder engine with DPF, which is the same engine used on the biggest 4066M and 4066R models.

The 3R and 2R series have also been fitted with a new eThrottle function integrated into the eHydro transmission. The design of this feature is aimed at making the tractor quieter, more comfortable and more fuel-efficient.

The 4R models can now be fitted with a StarFire satellite receiver and AutoTrac Universal automatic steering system. According to John Deere, this will help achieve greater levels of accuracy and input cost savings when working with implements such as amenity turf sprayers, seeders and spreaders.

On selected models, the award-winning Hitch Assist system makes coupling up implements and trailers to the tractor’s rear hitch or three-point linkage quicker, easier and safer.

Using this system, external switches mounted on the rear fender allow the operator to move the tractor backwards and forwards at a maximum speed of 12mm/second, and raise or lower the hitch as required.