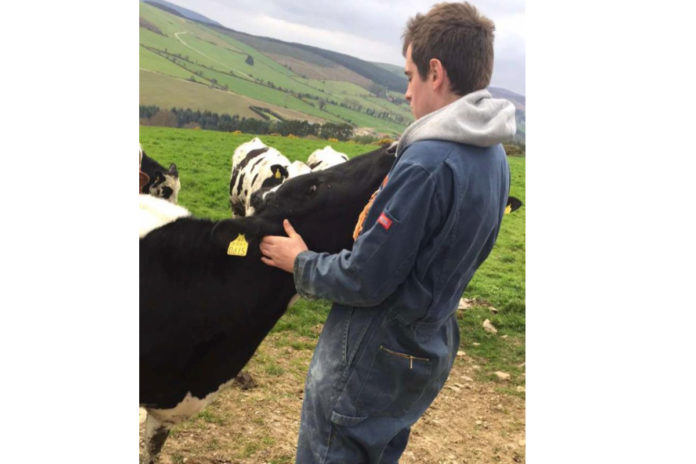 “I wanted to be a dairy farmer from a young age and could never see myself doing anything else,” – those were the words of Jack Keenan when he sat down for an interview with That’s Farming’s editor, Catherina Cunnane.

The 27-year-old was involved in the running of the family farm, which is located in south-east Wicklow, just outside Aughrim, throughout his childhood.

He attended Kildalton Agricultural College in 2013 where he attained a level-5 certificate in agriculture. “I completed a twelve-week work placement module on a dairy farm in Tullow, Co. Carlow where I enhanced my knowledge,” he explained.

Jack then progressed to undertake a level-6 advanced certificate in agriculture at the college before he returned home to farm with his father, Donal, in November of that year. They formed a farm partnership in April 2017 as part of a succession plan and Jack availed of grants under the young farmer’s scheme.

“As the farm isn’t sustainable enough to take two incomes out of it, I got myself a job, milking morning and evening, five minutes from home.”

The family farm consists of 53ha – a 25ha milking platform, with an additional 28ha located 1 km away, which is used for heifers and calves; a further 10ha is leased for three cuts of silage.

All machinery work, with the exception of fertiliser application, is contracted out to a neighbour, who oversees silage, slurry-spreading, hedge-cutting and reseeding.

This year, the Keenans plan to calve down 45 cows and 14 heifers. The herd comprises mainly of Holstein Friesians-types, with some Montbéliardes. “Our cows are an average of 600kgs, but ideally, I would like them to be slightly lighter.”

“In 2015 when quotas were abolished, we produced 450kg of milk solids – that’s an increase of 100kgs in 4 years which has been achieved by breeding more efficient cows and grassland management.

Cows are AI’d to Friesian and Jersey sires for a nine-week period, before an Aubrac bull is introduced to the pastures with cows for three weeks, while heifers are bred to an Angus sire.

“We are trying to breed a smaller and more efficient cow. Breeding started on April 24th, 2019 so calving is underway.”

“Over the last few months, the pressure on dairy farmers regarding bull calves has continued to be highlighted on social media – I 100% think this is blown out of the water.” the young dairy farmer admitted.

“We sell all our Friesian bulls and Angus calves in Carnew Mart. For the last two years, we have had calves with Jersey genetics, and we have had zero problems selling them.”

“If you have a strong healthy calf, it will sell! Treat every bull calf as if it’s a replacement heifer – the last thing you want is trying to sell a poor-quality calf and get a bad name for yourself for poor stockmanship.”

Grass is measured on the farm weekly using a grasshopper plate meter and data is uploaded to Pasture Base. “Here I can see growth rates; how much grass is on the farm and I can budget grass. In 2019, the farm grew 13ton/ha.”

“Cows are out to grass as they calve, whether it be for on/off grazing for 3-4 hours. If there are dry conditions, cows will be out-full-time.”

The family grow fodder rape every year on their milking block. “This is a handy way of making sure land will be reseeded every year.”

Cows graze this for three-hours from mid-November to early-December when they are housed. “In-calve heifers are then put on rape until two weeks before calving. They get a fresh allowance of rape each day and have full access to silage and minerals.” Jack added.

The plan this year is to sow a mix of plantain and chicory when reseeding, with a view to reducing the farm’s nitrogen usage and carbon footprint.

Jack’s main goals going forward include increasing the efficiency of the farm, growing and utilising more grass, increasing production by a further 10kgs and improving the herd’s 6-week calving rate.

“Our herd size is almost maxed out as were land-locked by a neighbouring dairy farmer.”

“To succeed in the sector, you have to be willing to learn, be open-minded and be ready to take a chance.” said the Wicklow native, who is a member of a discussion.

“No matter what sector you go into be efficient – Don’t be running around chasing your tail and don’t be a busy fool,” Jack concluded.