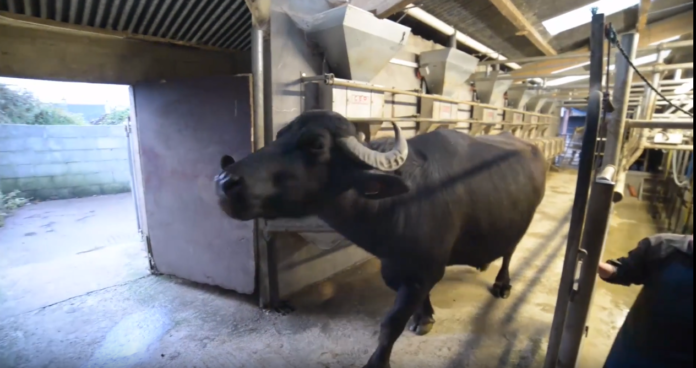 Johnny Lynch from West Cork had been working as a dairy farmer in 2009, and he realised that by 2015, the quotas were being removed and that would cause a decline in milk prices, so he had to make a decision.

Johnny did stay in dairy; however, he traded his herd of cows to a herd of Water Buffalo.  If making mozzarella cheese didn’t work, then he could start selling their meat.

“Water Buffalo are a very healthy animal, the milk is much more like goats’ milk than cows, so you have a much higher yield for making cheese”, said Johnny.

The farmer travelled to Italy for a couple of weeks to learn the process of mozzarella making. The Lynch family did learn; however, they also employed a professional cheesemaker – Seán Ferry.

In 2009, they brought twenty 1.5-year olds and nine 8-month-olds on to the farm. The older buffalo were put in-calf and they calved down in 2011, “the first couple of years were very slow” said Johnny.

They almost gave up waiting and were considering returning to a milking herd, but that decision was rejected and the Lynchs’ are happy that they waited.

“It is so much easier now with the animals that were born here as opposed to the ones that we brought in” said Johnny, who said that time must be spent with the animals in order for them to work efficiently on the farm.

Johnny said that containing the herd is important and you must put an electric fence around everything as they love to scratch. On the Lynch’s farm, fencing poles and trees are also wrapped in electric fencing.

The clever animals have also learned how to open gates and all the gates on the farm are chained.

The animals milk for 250 days a year, so their milking period is much shorter than a Friesians. The buffalo’s gestation period is 10 months and a week, and they can often carry for 2-3 weeks longer.

“Prolapse is their biggest issue, they can calve down easily, but prolapse is what you need to watch out for” explained Johnny. “The other challenge is calling the vet, they really don’t know much more than you do, so they have been learning with us for the past few years”

Johnny also explained how he didn’t feel like he was taking a risk at the time, however, in reflection, he realises that the risk was actually a huge one.

Produced and edited by TF Media