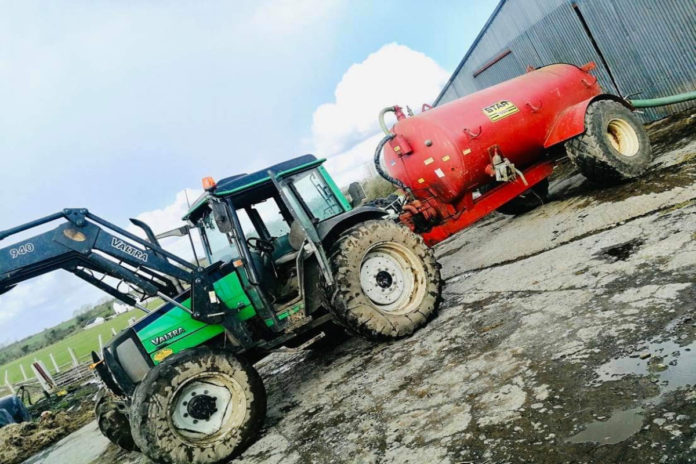 Contracting was never in the blood of Steven Lane Spelman, but that never deterred him from following what he was passionate about.

The 20-year-old from Dunmore, Co. Galway always had an interest in machinery and began offering agricultural contracting services to local farmers as a teenager.

Hailing from a beef and sheep farm, Spelman farms full time with his father alongside his contracting business.

The business began three years ago when he started topping for neighbouring farms and found himself enjoying the work. He then started offering slurry spreading services before eventually investing in a sprayer to add another string to his bow.

Although that is a lot for any one-man system to offer, the Dunmore man found that not offering a baling service made things difficult at the beginning.

“With a lot of farmers, if they get one contractor to do their baling, they like to get him to do all the jobs, which is completely understandable,” he explained.

“This year, I approached the lad that does our baling. He only started out a few years ago as well, but he had the baler, mower, wrapper and rake.”

“I talked to him about starting a partnership, where he could offer slurry and other services and I would do that work for him, and if I had any silage work I would pass it his way.”

Steven said that this system has been extremely helpful in getting his name out there, which was the most difficult aspect of starting the business. Through this system and advertising online, the 20-year-old has started to build up a client base.

“I’m not trying to go and compete with the lads that have 2600-gallon tankers, I’m going with what I have, which is a 100-horsepower tractor and a 1500-gallon tanker.”

“The way I market myself is that I can go anywhere that an umbilical system can go with the weight of my setup. I’m not going in with a big 200 horsepower tractor and digging, so it’s going to be better for their land and they can get the slurry out.”

“So, I work it that way rather than trying to compete with lads with 5 or 6 tankers. I don’t want to be taking work off anyone or undercutting them either, that’s the most important thing.”

The 100-horsepower tractor he eluded to is a Valtra A95, which was bought new in 2005 and is still the only brand-new tractor to ever be purchased on their farm.

“It’s serving us well, but my father is giving out that the hours were awful low before I started driving it,” he joked. “He claims that over the last 2 years they have doubled.”

“The plan would be to trade it in for something slightly bigger, but I would be happy with getting a second similar-sized tractor instead. I have good friends that would give me a hand if I had a big job on, but it would be nice to have my own and not be worrying.”

Steven told That’s Farming that there is never a day when he regrets his decision to start contracting. He has found that it offers him far more than just an income.

“I enjoy agricultural contracting that much that it never feels like work. It’s a hobby really, but it’s great to be able to help people as well. You learn a lot from the people you meet.”

“You see an awful lot of things that you wouldn’t otherwise see and meet a lot of people that you wouldn’t have met before. You get to know people and it’s great because you know that if you’re stuck or they’re stuck you’re only on the other end of the phone.”

At present, Steven works in a one-man system for the majority of his work and acquires the assistance of friends when needed.

Although this works well for him at present, as the business grows and he gets busier and busier, he hopes to be able to expand the team.

In addition to this, he hopes to expand the services he can offer and the machinery at his disposal.

“It’s a tough scene to get into because an awful lot of farmers have their own machines, so I’ll only do it if it’s justified and the right thing to do. Otherwise, I’ll have to look into something else. Things change every year, so I’ll see what way it goes.” he concluded.

If you wish to acquire the contracting services of Steven Lane Spelman, you can contact him on 085-8370003