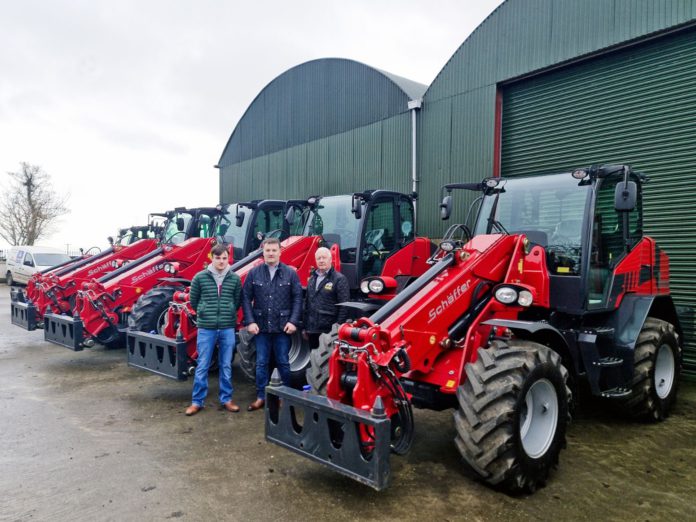 ‘Nothing succeeds like success’… It’s a very old saying but that has certainly been the case for Howard Fulton Tractors, Dungiven.

They recently received Schaffer dealer of the year in the UK for the second year in succession. They are now newly-appointed Schaffer distributor for all Ireland.

As anyone in business will tell you, these things don’t happen by accident. It’s down to hard work, good service and back up, dedicated staff and most important of all, a quality product.

Schaffer made the change from having a number of franchises to focusing all distribution and servicing by one, centralised dealer a few years ago.

This change in their business model saw the Schaffer brand grow massively in the UK and Ireland with Schaffer now being a front runner in the loading shovel field.

Offering an extensive range of twenty-one machines, Schaffer has a machine for every task and eventuality.

The design and engineering involved in these hydrostatic machines is ahead of its time with excellent forward speed and a central pivot steer-making Schaffer the most versatile loading shovel on the market.

And it’s not just in the agricultural sector that Schaffer has made an impact. There are a number of machines working effortlessly in various renewable energy sites across the country, within construction and ground care.

Howard Fulton said: “When the overall figures are calculated, 2020 will probably have been even better than the previous two years for Schaffer sales in Northern Ireland.”

“Where other popular brands of loading shovels may have been the ‘go-to’ option for farmers, Schaffer has quickly established itself with its reliability and build quality being a key selling point.”

“Most farmers don’t buy solely on price nowadays – back-up and service is their main priority. This is, undoubtedly what has made H Fulton Tractors one of the top agricultural machinery dealers in Northern Ireland.

“We insist on a customer demoing a machine for themselves. That’s when they get to see just how good Schaffer is and how versatile each machine is. It generally makes the salesman’s job very simple.”

Howard went on to describe how he has customers who are now on their third Schaffer machine with little to no parts needed by each one.

“Now that Brexit has come and gone, we will be using our subsidiary company, SCHAFFER IRELAND, for the distribution process which officially kicks off January 1st, 2021.”

“H Fulton Tractors will still be looking after Northern Ireland and Donegal for Schaffer sales and service. There are a number of very successful Schaffer dealers already in ROI. Our plan going forward, is to expand and increase that.”

“We will be spending a lot of time getting to know dealers. Rest assured, those with only the best reputation for customer care and service will be brought on board.”

Fulton mentioned that full training and servicing courses will be organised for all new dealers and staff coming on board. Also, there will be visits to the Schaffer factory to appreciate fully, just how elaborate Shaffer is.

To celebrate this latest chapter in Schaffer’s success story, there will be a number of special deals from January onwards.

The company will release details in due course.

- Advertisement -
Previous articleCould you be Ireland’s Fittest Farmer?
Next articleRoscommon brothers who have raised over €50,000 for charity organising online auction