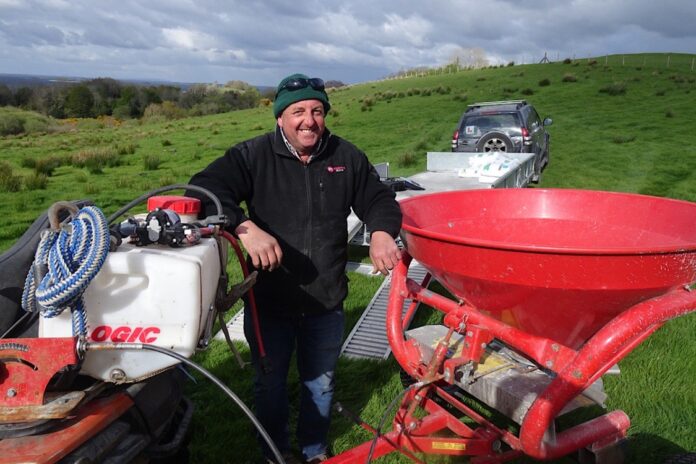 He left his haulage job six years ago to venture full-time into agricultural contracting and continued to offer weed wiping, topping and plant hire services.

To lay the foundations for his business, he obtained a second-hand Suzuki 750 quad and a home-made weed wiper.

Also, during the 2000s, Peadar operated a scaffolding company and erected scaffoldings for private-built houses.

Commenting on why he ventured into agricultural contracting, he told That’s Farming:

“I was trying to get a business going near me where I would be working for myself.

“There are four children in my family. It hard enough to keep a full-time job going and look after babysitters and things.”

In addition to running his own ag contracting business, he farms 350-acres and rents 50-acres. He has 300 sheep, which are primarily Blackface Mountain sheep with some Lanark, Jacob, and Suffolk sheep.

Peadar purchased two land parcels from 2004 to 2006 from his brother, who was selling his holdings in the very centre of his parent’s farm. In 2018, he inherited his parent’s farm, which spans 250-acres.

According to Peadar, hillwalkers use part of his land for climbing. He also cuts turf using an old-fashioned slane on this land. 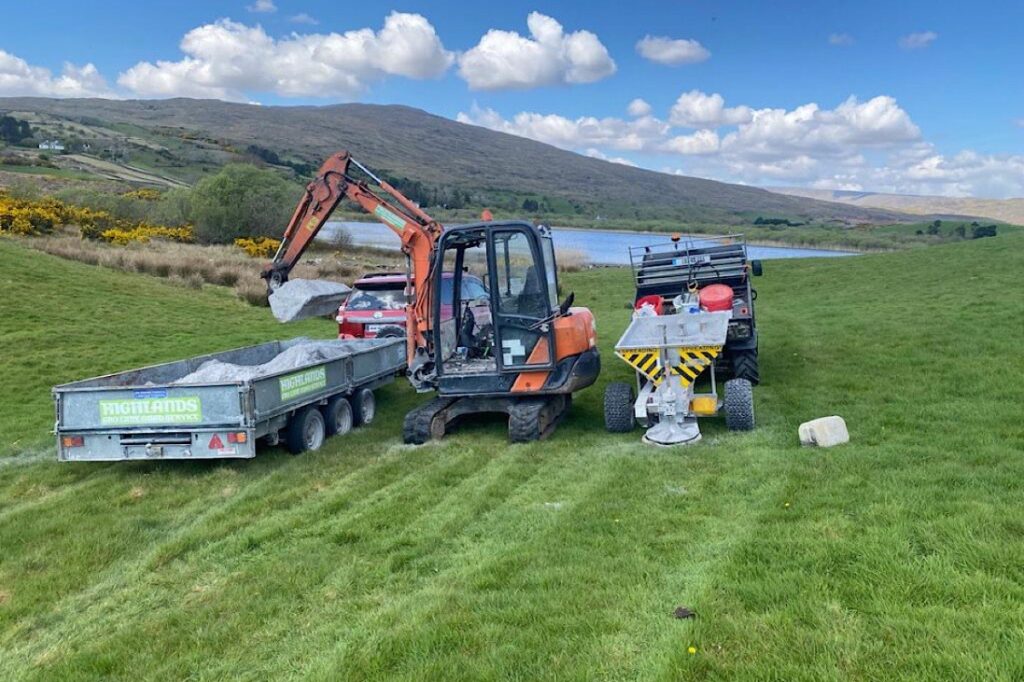 The business initially built up its customer base through word of mouth and distributing business cards locally.

“There would be no one around here doing what I am doing. So, I complete a lot of repeat work and try to finish my work to a high standard.”

“I do any work, I do for myself, the same for customers. So, I would be nearly fussier with doing customers work than I would be with myself.”

He believes the key element to running a successful agricultural contracting and plant hire business is maintaining “the quality of your work” for customers. 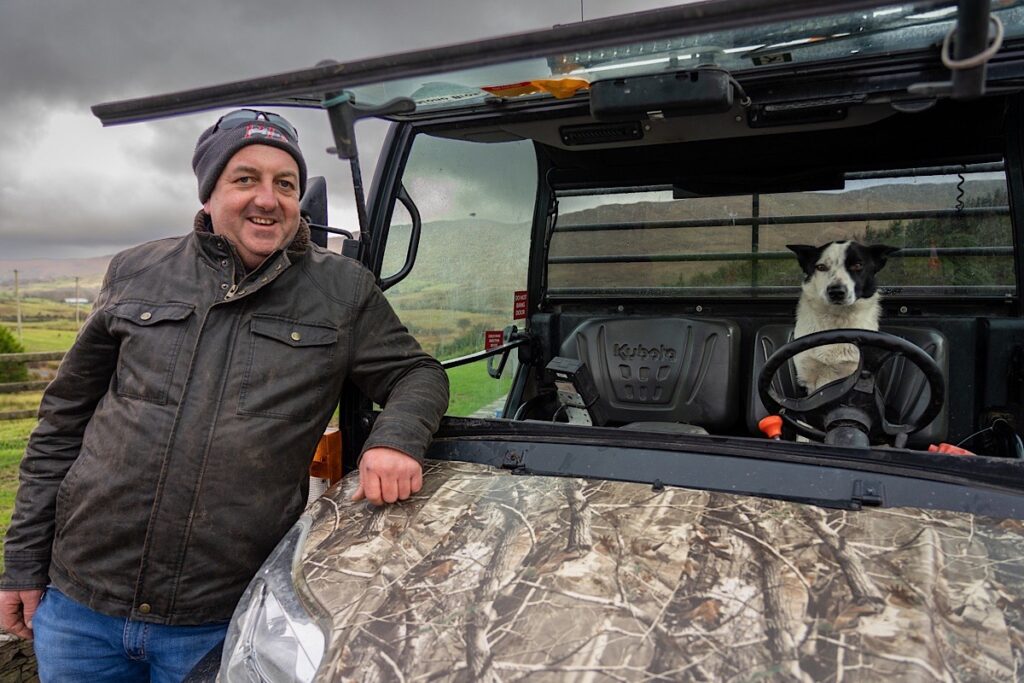 In 2017, Peadar branched into plant hire. He bought the digger to complete farm improvements with the plan to offer a groundworks service and hire it to the public during his quiet periods.

“Weed wiping rushes was a very popular service throughout the years, but now lime spreading is getting popular because fertiliser has got so dear in price.”

“So, customers are going for the option of lime. For example, I can spread lime on steep and slopey ground where tractors cannot. Lime spreading is picking up every year for me. I could spread 400-500t of lime a year.”

He aims to increase his work on the lime spreading arm of the business and feels he can access more locations by using his excavator to dig before spreading. “Lime spreading would be the job I most like.”

His brother, Ciaran, built him a lime spreader that can be towed by a quad, which has encouraged a “big” work volume for Peadar in his lime spreading service. 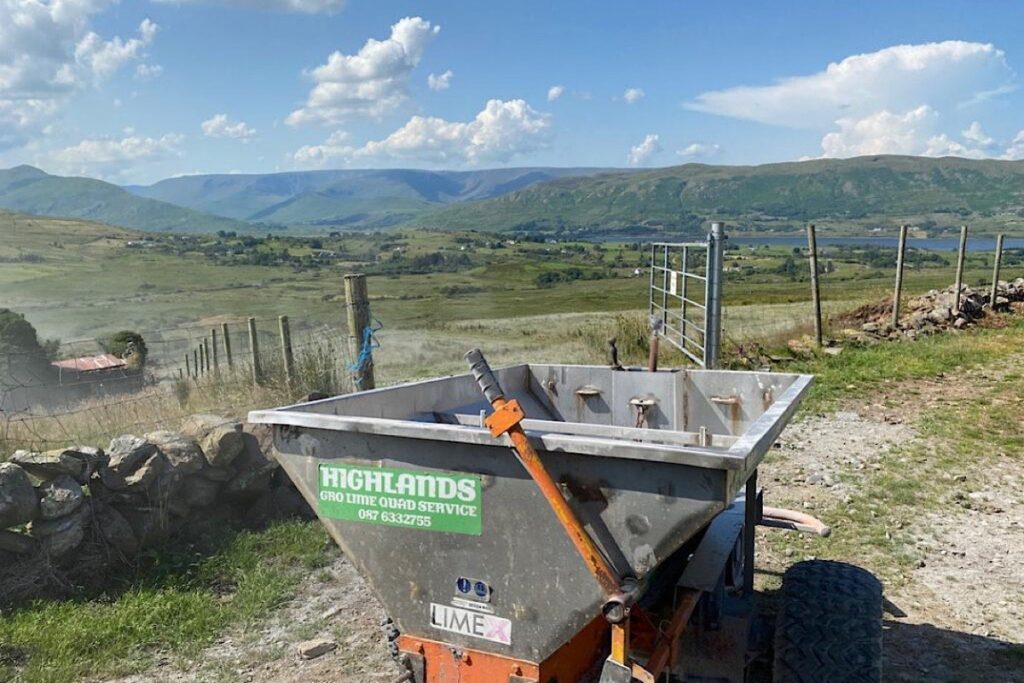 Peadar’s brother carries out the maintenance work for his fleet.

“My brother is a fitter, and he lives back in my home place. He services and maintains tractors and quads as his own business. I buy a brand-new quad every two years.”

“In my view, the small machinery is ideal for the area I work in. In addition, the digger can make life much easier for me if there is rough terrain which may not have an entrance.”

“You can level out a 10ft entrance and get in with the machinery. For example, I am spreading lime where there was never lime spread before.” 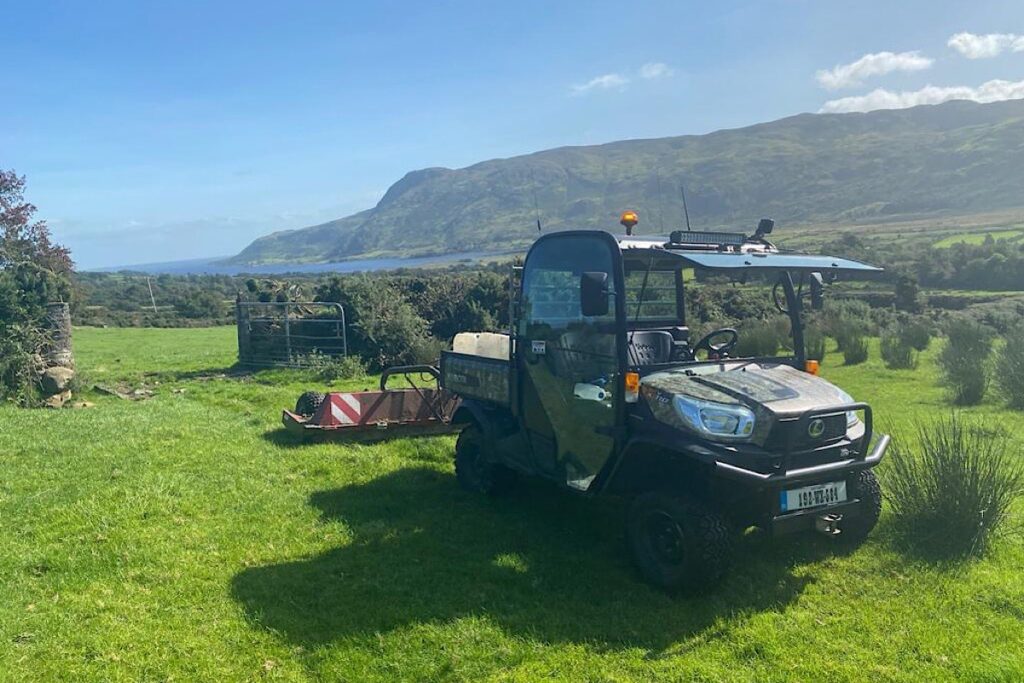 “Diesel prices are challenging. So, I am thinking about changing over to a diesel quad. The quad could burn between €50 and €60 worth of petrol during a long day.”

“For example, the pit silage contractor has no way out; they have to buy the fertiliser.”

“The fertiliser I spread is based on samples where I base it then with lime. I am topping it off with whatever bagged fertiliser I was told to do from the samples with trace elements.”

“However, a lot of customers are leaving that now. In my view, fertiliser is too dear in price.”

He said he does not intend on business expansion or employing staff – due to weekly family commitments.

“If I were starting my business again, I would have bought a brand-new Logitech Contact 2000 weed wiper, a brand-new quad and tried hire purchase to see how I would get on.”

Peadar feels agricultural contracting will get “rocky” for a while for him regarding the clampdown by the government on spraying rough terrain.

The increasing costs of weedkiller will also impact the Galway agricultural contractor.

“The weedkiller I use has increased threefold in price, so that is going to push the farmer to do something different.”

“For example, this year, twenty litres of weedkiller cost me €270, and it cost €87 last year. So, you could see a lot of farmers trying to buy a cheap weed wiper to do their own work.”

“Then, you could have the problem with the government coming in and maybe trying to get more people into organics,” the agricultural contractor concluded.

- Advertisement -
Previous article
Cattle to €1,595 over the kg and sheep to €370 at Raphoe
Next article
How AI technology is helping farmers reduce costs and fertiliser use