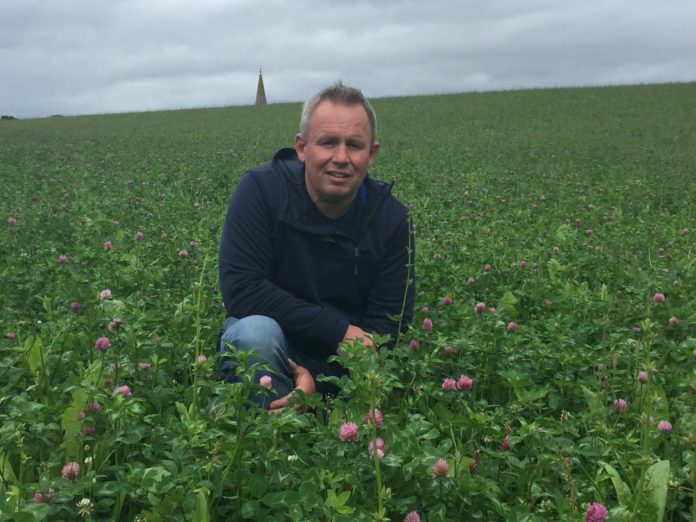 The Co Down native adopted the practice in his farming rotation over the last four years.

From there, he progressed from to 75-acres now being grown on-farm.

With the farm being operated organically, the herbal leys with their deep roots, nitrogen-fixing and lifting capabilities and anthelmintic properties fit into the system “perfectly”.

Calving and lambing commence on the Orr farm at the start of March. The farm comprises 103 Hereford-cross suckler cows and 390 pedigree Lleyn ewes with an additional 90 in-lamb ewe lambs. He finishes all progeny – both calves and lambs – on-farm.

Herbal leys or multi-species swards are a seed mixture of grasses, legumes and herbs.

The grasses contained within the mix contribute as the main supply of energy, the legumes that of protein and the herbs the main provider of minerals.

This mix ultimately brings a range of benefits to the quality of the forage being produced. It also benefits the health of the livestock as well as soil fertility/structure.

For instance, some third-party on-farm grazing trials have highlighted their benefits.

They have showed reduced faecal egg counts (FEC) on lambs that were grazed on swards containing herbs in the mix – such as chicory – due to the anthelmintic properties which it processes.

Due to plant diversity within a herbal ley sward and its dense leaf structure above the ground, it naturally can capture more sunlight, which, combined with its deeper rooting structure, allows for better water and nutrient uptake and retention and subsequent growth, especially in drier more drought-like conditions.

These attributes, along with the legumes’ nitrogen-fixing capabilities, can be as high as 150-200kg N/ha/year.

Nitrogen lifting capabilities of the herbs allows for, in many cases, greater growth during the summer months where temperatures are higher and soil moisture content lower.

At the Orr farm, grazing of the herbal leys is predominantly for ewes and lambs. It starts in late January/early February with in lamb ewe lambs, six weeks pre-lambing.

“Due to the sward quality, body condition of the ewe lambs would be ideal, resulting in quality colostrum production with no requirement for additional meal feeding resulting in good strong lambs.”

Once grazed, he rests herbal ley paddocks for six weeks to allow for regrowth. Then, he places them into a 25-30 day grazing rotation from that point on.

Once growth improves, he splits fields into paddocks that will graze for five days at any one time.

It is similar to that of the grass and white clover swards on-farm. The only difference is the herbal leys are not grazed down as tight as the grass swards due to the growing nature of the herbs and legumes.

Late October marks the end of the grazing season and the start of the herbal ley rest period, which lasts approximately 100 days.

This allows for regrowth to accumulate over the winter before ewe lambs start on it again in the following spring.

For Dale, at farm-level, performance to date from the herbal leys has been more than obvious in many forms.

For instance, in the case of Dales ewes, once lambed, he puts them into three mobs, all of which are grazed on different swards ranging from Perennial Rye Grass & White Clover (PRG & WC) to herbal leys (Plantain, Chicory, Red Clover, White Clover) with PRG included to that of swards made up purely of herbs and legumes (White Clover mix, Red Clover x 2 varieties, Plantain and Chicory).

The average DLWG results at ten weeks of age were as follows across the three grazing sward types and show in Dale’s scenario a 16% & 7% increase in DLWG from the herbal leys over that of the PRG &WC swards, respectively.

Dale believes that once ewes and lambs are grazing on the herbal leys, he should keep them on this type of sward until they have reached their final market deadweight of 21kgs.

The reason for this consistent grazing approach is to:

Historically, the average days to slaughter for the lambs would have been in the region of 172 days.

However, since introducing herbal leys to the sheep enterprise, Dale has reduced his days to slaughter by 27 days, an 18% decrease, resulting in an average day to slaughter of 146. All has been achieved with no meal feeding.

Much is yet to be known as to the longevity of the awards. This is only the fourth year that they have been growing at the Orr farm.

However, Dale is more than happy with the performance and plans to continue using herbal leys within his farming system.