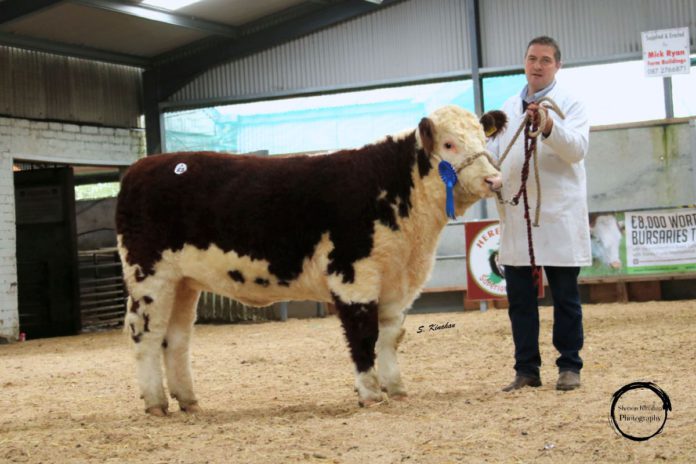 From humble beginnings, the Glaslough herd is one of the best-known prefixes in the pedigree Hereford cattle breeding circles.

The herd was established by the late Sam Heatrick, who purchased the holding in Annareagh, Glaslough, Co. Monaghan where his son, Nigel, now farms.

“My father began breeding Hereford cattle in 1951 and we have had them ever since. I have been involved in farming all my life.” Nigel told Catherina Cunnane – That’s Farming.

The Glaslough herd was founded with the purchase of a cow and calf pairing from JP McKiernan, from Co. Cavan and continued to grow from strength-to-strength as a result of the retention of daughters from the original foundation female.

Subsequent purchases were made thereafter, although the herd, which is a participant in the Beef Data and Genomics Programme (BDGP), remained relatively small in size in its early years.

The herd, which is now managed by Nigel and his family now consists of approximately thirty pedigree-registered breeding females.

Operating a 50:50 split autumn-spring calving system, the Heatricks place an emphasis on breeding correct, well-conformed-types, with a view to producing suitable bulls for dairy customers. “We aim to breed cattle that the dairy customers want,” explained Nigel.

Some heifers are retained as replacements, while others are sold as surplus breeding stock to new and established breeders. A selection of high-end bulls is also sold to pedigree and commercial suckler farmers.

“We always try to bring the top bulls to breed society sales in Tullamore, Nenagh and Kilmallock, while a number of repeat customers based across Ireland also purchase privately from the farm.”

[Nigel with young handler, Sinead Conry, at the premier show and sale in Tullamore in October 2019]

Some of the most notable price-tags achieved for animals from the Monaghan-based farm include €7,000 for Glaslough Esquire who sold to Dovea AI.

The same bovine AI company acquired Black Water Lad in a private deal from the Monaghan-based farm; these are just two of a number of the Heatrick’s bulls that have stood in Irish AI.

Up to three stock bulls dominate the pastures, with a new sire introduced bi-annually due to the introduction of daughters to the main cow herd.

Nigel, who sits on the board of Irish Hereford Prime, runs his Glaslough Herefords alongside a 50-cow dairy herd. Heifers and steers are slaughtered in ABP, Clones with a carcass weight of 280-350kg from 18-36-months.

[Nigel with judge, Albert de Cogen and young handler, Eoin Lynch, at the premier show and sale in Tullamore in October 2019]

The renowned herd has a prominent presence on the show circuit, attending up to eight shows annually in Monaghan, Cavan, Tullamore and the National Calf Show.

“I am showing for as long as I remember. Some of the most prestigious titles include winning calf of the year on two occasions at the Royal Meath Show and we won several supreme and interbreed championships in the 1980s with a stock bull we used to have.”

Nigel’s late father, Sam, received the 2019 Hall of Fame award from the Irish Hereford Breed Society for his life-long dedication and commitment to the breed. Unfortunately, he passed away in August, but Nigel and his family are carrying on the family tradition with pride.

“I was delighted when my father received this accolade for his contribution to the breed and the society since he began breeding Hereford cattle,” Nigel said.

Looking forward to the future, Nigel’s plan for his farm is to maintain his current herd size whilst continuing to improve quality.

“The Hereford is the perfect fit for our system because they are docile, easily managed, easy calved, easy to maintain and have good fertility, producing one calf per cow per year.”

“I hope to continue my father’s legacy and grow the foundation that he built,” Nigel concluded.

[The Hynes family with their winner of the commercial class with sponsor, Nigel (board member of Irish Hereford Prime]

- Advertisement -
Previous article
‘Serious’ demand for cull cows at Ennis
Next article
Quiz: How well do you know ZAG?