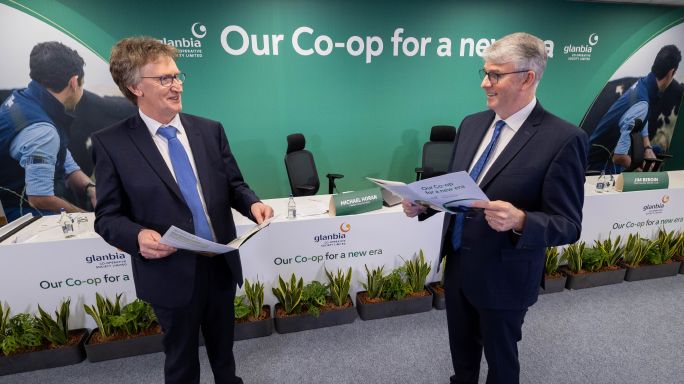 Glanbia Co-op: Voting results and the next steps

Glanbia Co-op shareholders have voted in favour of a proposal to pay €307m to take full ownership of Glanbia Ireland by acquiring Glanbia plc’s 40% holding in the strategic joint venture.

Just under 4,000 shareholders voted on a series of proposals and resolutions at an SGM of Glanbia Co-op on Friday, December 17th, 2021.

Results of the individual votes are as follows:

Glanbia Co-op shareholders voted to transfer, via share spin-out, 12 million Glanbia plc shares to all existing members of the society.

In addition, shareholders approved the creation of an investment fund, a 2022 member distribution reserve and changes to the co-op’s governance.

The board of Glanbia Co-op will formalise an investment strategy in due course, with any investment in potential projects in the future subject to “rigorous scrutiny”.
As part of the set of proposals, members approved changes to the governance of Glanbia Co-op, including:

Also, members endorsed the proposals to distribute approximately €149 million to all co-op members with a share ‘spin-out’.

Glanbia plc’s independent shareholders will vote on the proposal at an extraordinary general meeting (EGM) expected to occur in the first quarter of 2022.

If approved, the transaction is expected to be completed in the first half of 2022.
Glanbia Co-op is in a position to fund this transaction, if required, through a combination of existing cash resources and debt facilities.

Glanbia plc will retain its current name, while Glanbia Co-op and Glanbia Ireland will adopt a new name.

A process commenced to select the new identity, and approval will be sought from co-op shareholders in due course.

The main existing commercial arrangements between Glanbia Ireland and Glanbia plc will remain in place until the name change is implemented.