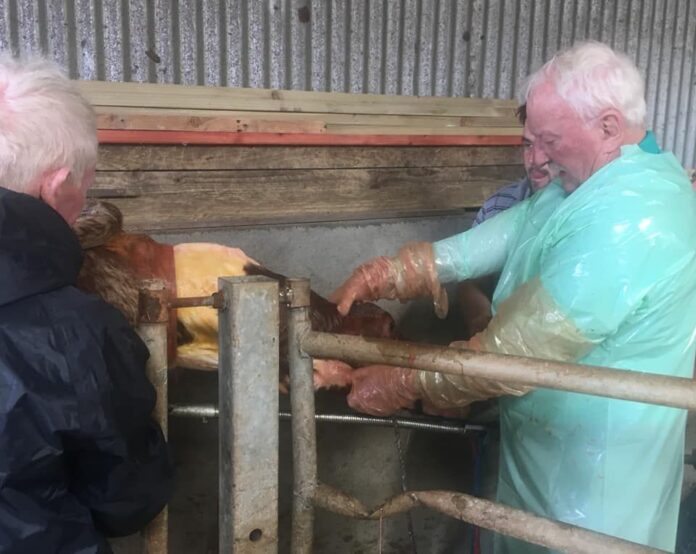 George O’Malley: A true veteran of the veterinary industry

In memory of renowned veterinary surgeon, the late George O’Malley, Castlebar, Co Mayo, who passed away on January 3rd, 2023, That’s Farming re-publishes its interview, which was conducted by a former journalist in 2018.

We wish to extend our deepest condolences to his family, friends and colleagues – May George R.I.P.

There probably isn’t a farmer in west Mayo who doesn’t know George O’Malley. The veterinary surgeon has been practicing in the region for the last 40 years.

From the far side of Louisburgh, Clare Island and Achill, and down to Black Sod, George has over 1,100 herds with his large animal practice in Castlebar town.

Veterinary is in his blood. George’s father, Paddy O’Malley, qualified as a vet in 1921 and began the O’Malley practice in the 1920s. He was one of the first temporary veterinary inspectors appointed by the state during the country’s foot and mouth outbreak.

George’s father greatly influenced his decision to study veterinary medicine. He watched him as a young boy growing up, and he said to himself: “If ever I can do it, I will become a vet.”

George graduated from University College Dublin in 1973 and worked in many practices around Ireland before returning to Castlebar in 1976 to help his father run the family practice. “It didn’t suit me to come home at the time, but my loyalty was to him,” George said.

George O’Malley Veterinary Surgeon is a two-vet practice, and with the help of locum vets, they cover a very large client area. George is invariably on the west side of Mayo and knows all the back roads at this stage. “I know them too many, too often and too late at night,” he added.

In the spring, the vets at George’s practice would be doing up to 70-80 hours a week. A lot of time is eaten up in mileage given the vastness of the region, George explained.

But George enjoys the work. “I run a very personalised type of practice. When I deal with clients it’s on a first-name basis. I know everyone,” he said.

There is no doubt that veterinary is a challenging profession. One of the difficulties George highlighted was the facilities on a lot of the old-type farms in west Mayo. “You do the best that you can for the client, but often times it is tough-going. Facilities are antediluvian and difficult to cope with,” George said.

The Mayo vet advises farmers to take heed of their stock and their facilities. And to be aware of the dangers involved. H

“A lot of stock now in the suckler herds are pretty wild. When the vet comes, like on the day of the test, cattle don’t behave normally. The farmer doesn’t expect this to happen, but it happens, and then you have trouble,” he said.

George focuses a lot of his time on fertility in cattle and sheep. Infertility is something he sees often in suckler herds in the Mayo region. “It’s the one bugbear over here. But we have a handle on it, a lot of it is selenium-based deficiencies,” he said.

One thing the Castlebar man has noticed this year is the good condition of cattle. “Farmers seem to have better-fed cattle this year than any other year, despite a long winter.

“A lot of stock are performing well and coming into heat naturally, but the farmer had to pay a fortune for the feed their herd required,” George said.

As a large animal vet, George had some invaluable advice for newly graduated vets. “Spend at least a year at different practices, especially large animal, to get a taste and feel for what’s ahead of you,” he said.

George believes vet schools should have a programme for fourth and final year students considering pursuing large animal veterinary, to spend at least three to four months with large animal practices to learn the ropes and to understand the area they are getting in to.

One thing a large animal vet in Co. Mayo would not expect to see is an African Lion. George recalled the day the circus arrived to Castlebar town, and he was met with the memorable case.

“We were asked to come down and look at the lion. We thought they’d be there for the day and then be gone, but they were staying a week, and we were cornered with this lion.

“To make a long story short, it was on post-mortem that we discovered what he had died from. He had inadvertently drank anti-freeze product out of a bucket which damaged his kidneys.”

“It was a case no vet would like to see presented to him or her,” George said.

A true veteran of the veterinary industry, George has no plans to retire just yet. He has been physically active all his life, playing rugby, soccer and tennis in his younger days, and even has a Connacht Cup medal with Castlebar Celtic.

“I’m physically fit. I broke a few bones in my time but I never really got badly injured at the job. I will keep on going as long as I’m healthy and can keep mind and body together.

“But if I feel the years beginning to reign me in then I will slowly wind down,” George concluded.