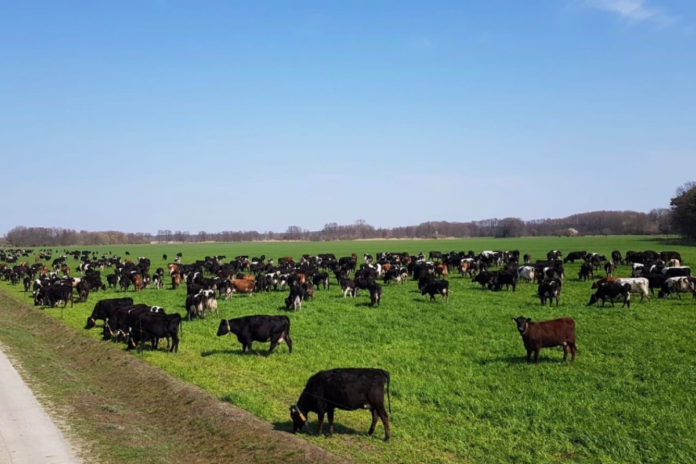 As part of a new series, That’s Farming will be profiling Irish farmers overseas – First up, Catherina speaks to Vicky Lynch.

Irish brothers, Paul, and Stephen Costello, are making waves in the dairying world in Brandenburg, Germany.

The family is best known for its association with pig production throughout Ireland, the UK and Germany, a tradition which was started by their father, Billy and Pat.

Currently throughout the Emerald Isle, they operate pig units in a large biogas plant in Kildare (Green Generation), while in the UK, they own pig units and a biogas plant and in Germany, their enterprise revolves around pig units, biogas, tillage and dairy.

“In 1991, Billy bought the first of the pig farms in Germany and in 2014, Paul and Stephen purchased the 1,500-hectare dairy and tillage farm, of which 400ha of that was grassland.” Vicky Lynch of ‘Real Grass Milk’ explained to Catherina Cunnane, editor of That’s Farming.

When they purchased the dairy farm, it was home to a 400-strong high-yielding all-year-round calving herd of Holsteins farmed under an indoor system.

“We kept this system going for a while which proved very costly and with the abolishment of milk quotas in 2015, we had a choice to make.”

“We either had to get bigger, which would have meant huge investment in infrastructure as the existing farm buildings etc were in poor condition and built like every typical east German farm, which, at the end of the day would leave us with the same milk price as everyone else.”

“With volatile prices on vital feed sources such as soya, it made sense for us to find a niche market.”

From 2015, they began transitioning to a fully pasture-based system, which meant that fields had to be fenced, water pipes had to be laid, cows had to be synchronised and bred into one season with Jersey genetics.

“It was a fascinating process that I hadn’t thought too much about before then,” Vicky said.

“In Ireland, infrastructure is generally already in place, things like trying to figure out where to get a water trough sturdy enough for 900 cows outside wasn’t a question that was often asked.”

“Farm roads were generally pre-existing and a dose for lungworm could be bought at your local co-op. The entire system was new to an average German.”

Five years later, the brothers, and their team of Irish and German employees, are milking 900 cows as part of a pasture-based system, which, according to Vicky, is a “very unusual thing” in Germany.

Alongside their dairy enterprise, is a tillage system which involves growing a large quantity of maize for on-farm bios gas units.

The herd is quite young mostly in either their first, second or third lactation; they are currently delivering 442kg of milk solids at 4.3% protein and 3.7% fat.

Currently, their produce is sold as conventional milk, but the team of Irish and German staff are in the process of branding it themselves as 100% ‘weidemilch’ or pasture milk, a product which is currently not available to German consumers, Lynch revealed.

Calving begins from mid-February, with calves grouped immediately into pens of ten, another practice not performed in this country.

The breeding season gets underway on May 10th with females, AI’d to LIC’s panel of Jersey and Kiwi-cross sires over a six-week period.

A team of Angus bulls mop-up before cows are dried off in December and outwintered on sandy paddocks where they calve down.

“Our growth season is slightly behind Ireland, but we are able to graze out longer in the year due to the climate in Germany.”

They are also able to out-winter cows for their dry period which is a huge labour saver and can improve herd health.

“Our ideal cow is 50% Jersey and 50% Holstein. From working with pigs for years, we transferred our knowledge of how we breed our sows.”

“For us, the F1 was the most desirable, it provided hybrid vigour and a suitable size.”

“For our cows, the F1 provided the best of both words – it was a good size with a good mix of volume and solids and had fantastic benefits in terms of health, fertility and hardiness.”

They contract rear their first 200 calves as this eases stress on their team. Calves must remain on-farm for a fortnight before they can be transported. They rear the rest of the calves until weaning and either retain a group or sell.

In 2019, they installed a 60-unit Centrus Composite Rotary, which is believed to be Waikato’s first rotary in Germany.

The parlour is fitted with a backing gate, automatic drafting, a veterinary platform and ACRs. “We’ve found it brilliant, very robust and another huge labour saver on the farm especially around busy seasons such as calving and breeding.”

“We bought something different to the table We used the system to work for us and turned something like grassland, that would usually, be just set aside and deemed useless, into something very special here.”

“It makes me feel so proud to be Irish as the locals and consumers are really fascinated by how we farm – they weren’t used to seeing a cow outside, let alone 900 of them.”

“Grazing was an idyllic thing you saw on the side of a carton whereas now they can see it in real life, which is astonishing to someone used to seeing it.”

Vicky explained the similarities and differences between Irish and German dairy farms, drawing specific reference to cow-types, land use and attitudes.

“Cows are housed pretty much all-year-round on a typical German farm. Jersey or Jersey cross cows are pretty much unheard of in our area.”

“Land, although poorer quality, but you can make up for that in scale because renting land is very economical – especially grassland as its generally set aside.”

“Traditionally, land was only used for tillage as cows were indoors, so anywhere that the tractor couldn’t drive due to it being too wet, was set aside but was perfect for growing grass.”

“I find the attitude towards farming in both countries is quite similar – questions facing farmers such as environmental aspects and animal welfare. Labour is always a big question too!”

Vicky said the most challenging aspect was trying to prove that the system would work. “Every single thing was a challenge.”

“From being told we could never grow enough grass, to block breeding and calving wouldn’t work, but thankfully, it all worked out and everyone is loving the system.”

“In terms of the Covid-19 pandemic, farming had to continue as normal, that was a given the supermarket shelves weren’t going to fill themselves.”

“Neither myself nor Paul (farm owner) were able to travel over to Germany, especially during key times such as breeding. I would like to thank Kevin and our team throughout the pandemic for all their hard work.”

“We usually bring over several students from UCD’s agricultural programmes and theses were all put a stop to which was a shame because they are always a great help during stressful times,” she added.

Looking ahead, the current dairy enterprise is nearly at capacity, so they hope that an opportunity will arise to expand into other farms, with a view to bringing young people into share farming models.

“I feel that farmers need to take a much more active role in involving young people into farming enterprises. We are all aware of the issues with labour and that may only get worse in the future.”

“I also think farmers need to highlight all of the good things that they are doing.”

“Pasture farming and all the products that come with it really are value-added and that should be recognised by everyone,” Vicky concluded.