That's FarmingThat\'s Farming Irelands Largest Farming News, Properties and Classifieds Network
HomeBeef‘There is no value for the effort we are putting into producing... 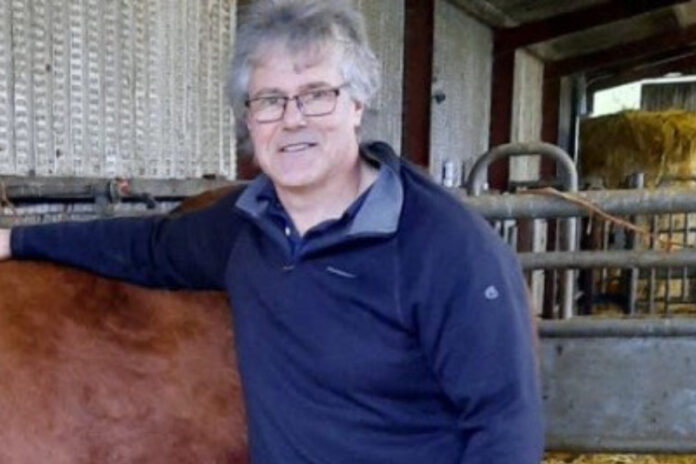 In this week’s Suckler Focus, That’s Farming, speaks to Donegal farmer, Russell Tinney. He discusses why he chooses Limousin and Angus cows, moving the calving period and his outlook on the future of farming.

As the saying sometimes goes, success comes in all shapes and sizes, and this is no different for Donegal-based full-time beef and sheep farmer, Russell Tinney.

His says his pathway to succeed in pedigree breeding is the result of research, sire choice, and meeting market demands.

His father, Laird, was a tillage and pig farmer, and when Russell took the farm’s reins, he expanded suckler cow numbers.

Russell always kept cattle and sheep before this but further built-up livestock numbers and reduced the tillage enterprise’s size.

Breeding pedigree cattle happened by “accident” one day six years ago in an attempt to bump up suckler cow numbers on the farm, which had declined.

He asked Paul Gallagher, to purchase a cow, who returned with an in-calf pedigree Limousin cow, Aughross Fleur, from Ballyshannon Co-op Mart. She went onto calf and laid the foundations for what become his Dunduffsfort Limousin herd.

Following on from this, in 2017, he made two more in-calf heifer purchases.

He invested in Liss Katrina, who came second place in her class, from Martin Doherty from Carndonagh and Wood Road Kelly from Noel Fennessy, Limerick at the Irish Limousin Cattle Society’s premier sale in Roscrea in 2017.

In October 2018, he established an Angus herd under the Dunduffs prefix after acquiring Mercury Lady Colleen from Shane Murphy at his herd’s dispersal sale.

“I was always going to be the farmer. I grew up on a farm, and that is what I had an interest in as I had no interest in anything else,” Russell told That’s Farming.

“Honestly, I had no interest in driving tractors as that was not my thing as I liked the animals. I did my Green Cert in Teagasc back in the early 1980s.”

“To be honest, there are plenty of AI straws to choose from. There does not seem to be any inbreeding in anything, as there always seems to be an outcross somewhere.”

Russell used to calf in autumn and spring but a long winter in ‘the hills’, he aims to extend this to close to six months to have cows calving towards spring to turn out to pastures post-calving.

His objective is to push out his autumn calving window later and bring the spring calving herd forward to “meet in the middle”.

He noted that he initially went with the original calving windows for a break period before lambing commenced so he could concentrate solely on this.

“I did calf heifers at 24-months-old, but the problem I found with that was some heifers suitable for breeding did not fit into that timescale, so I try to get them calved before 28-months-old and no older.”

“So, I calf the pedigree cows around August as, in my opinion, it is a quiet time of year, and you have the calf on the ground. You are going to have them one winter as well.”

According to Russell, cows require “very little” intervention during calving, and by using less AI and removing the stock bull from the herd, he achieves compact calving,

He noted that until investing in a stock bull four years ago, he spread out his calving season and used an AI programme.

He has a strict culling policy for age and fertility. Currently, he is retaining three replacement Limousin heifers and two replacement Angus heifers, selling bulls on-farm and hopes to have a consignment for Irish Limousin Cattle Society sales next year.

“I used Raphoe Mart and on-farm to sell them and finished the others as bulls, but I am having second thoughts about that with input costs.”

Bulls he slaughtered in 2022 averaged 438 kg and graded U= 3+s, levelling at an average price of €2,330 at around 17-months-old through a local producer group agent.

He manages his grassland in a paddock-based system, approximately 2.5-acres in area, and spreads slurry through a Low Emission Slurry Spreading (LESS) applicator as early as possible to reduce fertiliser costs.

The future of Irish suckler farming

“In my opinion, we are not getting value for what we are doing. So, there is no value for the effort we are putting into producing good calves.”

“I am happy with how my ewes are working, and sheep prices seem to be doing okay. However, I would like to gradually increase my pedigree ewes and get to 25 pedigree sheep,” the suckler farmer concluded.