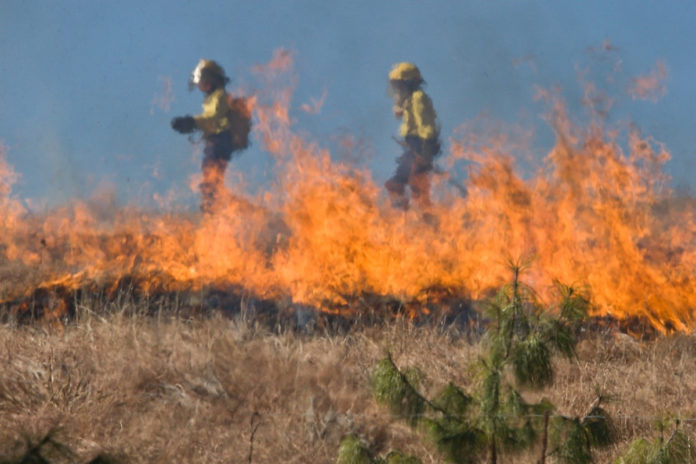 The Department of Agriculture, Food and the Marine (DAFM) have issued a condition orange fire risk warning for the coming days.

The warning is effective from today (May 11th) until 12pm next Monday (May 18th).

The risk has arisen from continued Atlantic, high-pressure dominated, weather patterns and low projected rainfall levels. The areas most at risk include those where hazardous fuels such as dead grasses and shrub fuels such as heather and gorse exist.

“Fire behaviour and initial spread rates are likely to be strongly influenced by lower afternoon humidity levels and light to moderate wind speeds during the lifespan of this warning but may be moderated by increased live growth in vegetation,” a department spokesperson explained.

The DAFM stated that most ignitions appear to be associated with deliberate ignitions in areas associated with illegal waste dumping and areas where active turf cutting is taking place, based on recent incidents.

All forest owners and managers are asked to prepare for a possible fire outbreak on their property. Fire mitigation plans should be put in place and all necessary measures are taken.

Advice to the General Public/Forest Visitors

Members of the public and visitors to recreational areas should cooperate with all requests regarding fire safety, obey all relevant bye-laws and be considerate in parking vehicles so as not to impede access by emergency vehicles, the Department stated.

Where fire outbreaks occur at or near recreational areas, the DAFM recommend the following actions to be taken by visitors, in the interests of safety: