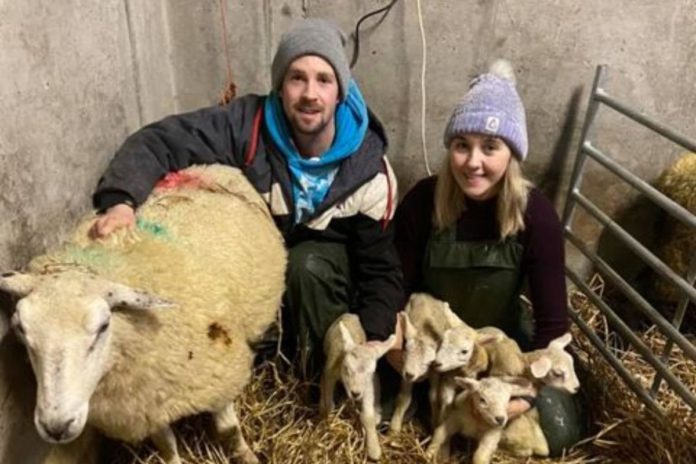 A farming couple from Co. Donegal is celebrating the arrival of quintuplet lambs.

The couple has described the quintuplet’s arrival as “the best Christmas present”.

Speaking to That’s Farming, Niamh said: “They are purebred Belclares. The ewe was scanned for three but surprised us with five!

“She had two ewes and three rams. She had lambed one herself, and then we gave her a hand with the rest.”

“Mammy and her babies are all doing great. We had two single ewes lamb the same night too, so a lamb each has been fostered on to them.”

“Also, we are helping the mother by bottle feeding one until another of our single ewes lamb, and we can foster another lamb onto her.”

“She will rear two then herself. The ewes will be kept, and the rams will be sold on as breeding rams.”

Christopher and Niamh tied the knot last year and run the farm with his father.

They keep a flock of Belclare ewes that lamb end of December. Furthermore, they farm a flock of commercial sheep which lamb from St Patrick’s day onwards.

“It is a sheep and beef farm. Chris and I also keep a small herd of purebred Simmental cattle. This is the first time the farm has ever had five lambs born from the one ewe.” Niamh concluded.