In this week’s Suckler Focus That’s Farming, speaks to Barry Quinn of Clenagh Charolais. The Clare-Limerick Charolais Club secretary discusses farming with his father, Micheal, breeding progeny to €13,000, four bulls in AI, calving at 24-months-old and his outlook on Irish suckler farming.

A move from dairying to high-end pedigree breeding has been a financially rewarding move that has delivered dividends for the Quinn family.

In 1983, Micheal Quinn swapped his 15-cow dairy herd for two pedigree Charolais cows and a calf, which he purchased at Roscommon Mart. These foundation cows, Golfview Roisin and Northbrook Helen, went on to form the renowned Clenagh Charolais prefix.

Over three decades later, the Quinns from Newmarket-on-Fergus have been topping sale catalogues and selling their popular progeny worldwide, with four bulls standing in AI.

Michael Quinn, his son Barry (a fitter with Hi-Life Tools), his son Rory, and mother, Mary, play an active role on the farm.

“My father has transferred a good share of the farm to me, but we work in partnership even though we have two separate herd numbers,” Barry Quinn, a Pallaskenry Agricultural College Green-Certificate graduate, told That’s Farming

“My early memories would be following my father around baling hay, milking cows, feeding calves, washing cattle, and getting them ready for sale.”

“I recall watching my mother and father head off with a car and trailer back in the day with bulls for sale in Naas.”

Barry explained the Quinn’s attachment to breeding Charolais and traits they look for in the breed.

“It is a love of Charolais cattle and good they can bring back into breeding beef cattle. However, we looked at many breeds and saw flaws with docility, carcass weight, and conformation.”

“Charolais cattle have good legs, good weight gain, great kill-out grading Es and Us, in the factory and produce beautiful cattle. We do not aim to produce the biggest cows in the world.”

“Our ideal cow is feminine with good fertility, good legs and able to rear her calf. We have done much work over the years to improve our cow-type and cull females that are not able to do that job on their own.”

“I see huge improvements in the Charolais breed over the last number of years. They have improved on milk and ease of calving and are continuing to lead the race in that respect.”

This approach suits the family as they sell their progeny at different times of the year. They offers bulls for sale at Irish Charolais Cattle Society sales from 14-months old.

Barry watches over every pedigree cow calving and has installed calving cameras to aid this activity. “Animals are too valuable, and calving season is a time you are watching everything is going right.”

“We like to let cows develop and use a slightly better type of bull after the first time around. Continental cattle seem to be heading for three-year-old before they are fully developed. However, they develop into a very good cow-type.”

“The time of year when they would be calving down at could be the difference between a cow calving at two-and-a-half years old and three-years-old.”

“We do not aim to achieve a compact calving window. It would not suit the system if we had everything calved in a couple of weeks.” 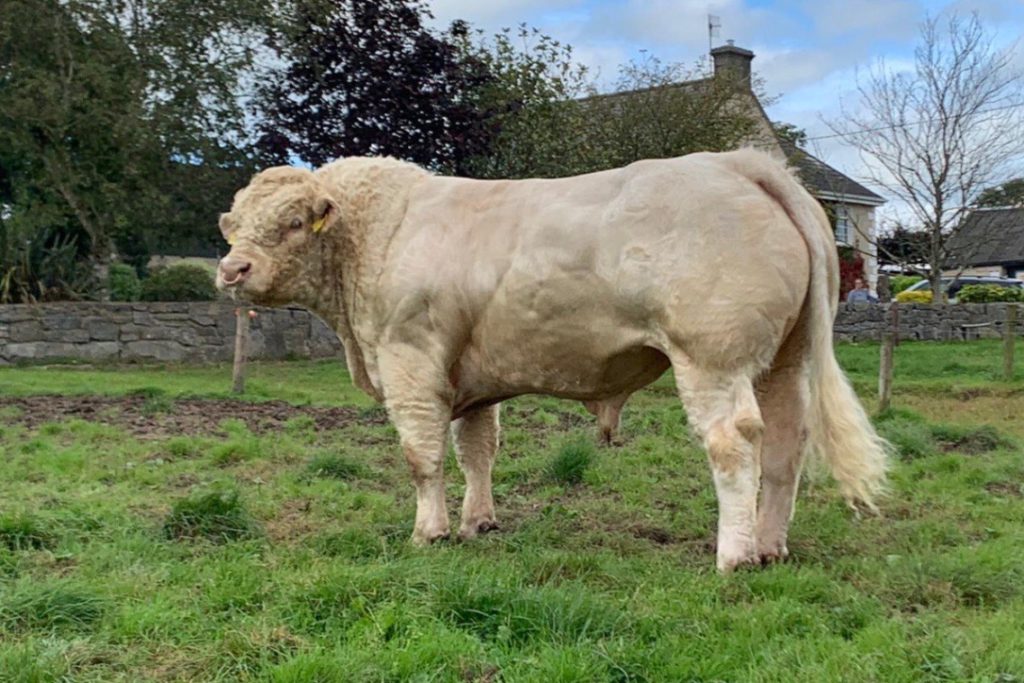 “Occasionally, if we have an exceptionally good bull, we will use a stock bull, but AI is our preferred option.”

“We check our cows three times a day for heat detection and sometimes use scratch cards and tail paint measures.”

Flushing occurs to one/two pedigree cows per year. The cow must be very fertile, a third calver, producing top-quality calves, and have style.

These significant flushes include Clenagh Vicky with one flush yielding thirty-one embryos and twenty-seven in another.

Barry believes it is very difficult to use some of the newer sires with the choice of quality bulls being limited and the introduction of €urostar’s leaving their figures with very poor reliability.

“When we see bulls, we quite like the figures can make it very difficult to go using them because they seem to be starting from a very bad point and need a lot of calves before you see an improvement in their figures.”

“We have been impacted with bulls over the years when a new bull you start using the first year, and from the time you inseminate the cow, nine months has passed before the cow calves.”

“The figures, by the time your young bull goes to the sale, have been impacted. You do not have that problem with the more established bulls.”

“You know they may fluctuate a bit, but fluctuation in the calving figures is very difficult to go using too many bloodlines that have no information readily available for some time.”

The family keep some of the best of their pedigree and commercial heifers for breeding purposes. They sell pedigree bulls through Irish Charolais Cattle Society sales and on-farm.

Theey cull 20% of the pedigree herd (2-3 cows) per year due to herd fertility and replaced with younger females.

A share of their commercial cattle goes to weanling sales in Ennis Mart or Sixmilebridge Co-op Mart with some finished off meal.

Some of these at society sales include:

“In the late 1980s, my father sold Clenagh Jude for 4,550 gns, which was a record price for a Charolais bull at the time in Naas. He sold another bull, Clenagh Grant, for 4,850gns the following year.”

Other successes include female champion, March 2020, with Clenagh Orion, who sold for €6,200 at the society sale in  Elphin.

“Clenagh Lyle became junior champion in Elphin at the Christmas cracker in 2016. In March 2017, we received champion at the March premier sale in Elphin for Clenagh Jasmine who sold for €5,600.”

“In December 2017, we had a senior bull champion, Clenagh Maserati, in Elphin who sold for €7,700 at the Christmas Cracker Sale. So, we had three consecutive champions in the space of 12 months.”

“In 2018, we won the RDS Champion of Champions following the previous year’s success.”

Cows with calves get a preference for new grass, and in-calf and followers will be next on the Quinns farm.

“We tend to let them graze down the paddock and let them move onto the next paddock, so it is a rotational system.”

One of these great lines of success includes Clenagh Lyle. He became reserve champion at the Tullamore Show, then champion at the national show, national calf champion in Elphin, junior champion at Elphin Christmas Cracker Sale and selling for the top price of €13,000 in 2017 as mentioned earlier.

The owner of Clenagh Charolais outlined his view on the modern-day suckler cow.

“There is too much focus on star ratings concerning the modern-day cow. I do not see the first-cross dairy cow being the answer to the suckler farmers, but maybe, second and third-cross with the right type of bull.”

“Relying on indexes for picking your cows/bulls is a dangerous game; you need to see them. Also, a lot of your easier calving cows are ending up with a smaller pelvis, which is going to lead to bigger calving problems.”

“A balance needs to be achieved between looking at a figure and the cow physically standing in front of you.”

The County Clare native commented on the position of the Charolais breed in Ireland.

“I think when the BDGP scheme came in, it did much damage to the Charolais breed, but the Irish Charolais Cattle Society and their breeders have worked effortlessly.”

“They have improved calving difficulty, gestation and aim at supplying the customer with what they want.”

“Customers are looking for bulls that will produce weanlings and achieve conversion rates to aim for their earlier kill-outs (16-22-months).”

According to Barry, success in pedigree breeding means being “critical of your own stock, being willing to acknowledge flaws, cull harshly, breed the best, and keep the best”.

Barry and his father intend to secure more bulls into AI, achieve the top 10% in the price table at pedigree sales, sell more progeny, and work on feminine traits.

“With the CAP reform they are talking about the moment, I think we will be lucky if we can retain the current numbers we have.”

“I do not intend in downsizing, and I would be worried we will not be able to upsize either. I would be nervous about where things are.”

Barry shared his view on the proposed suckler cow cap as part of the Suckler Carbon Efficiency Programme.

“The government has allowed a massive expansion of the dairy herd. So, if they are not going to do it one, why should they do it to the other?”

“I would always have reservations about people being forced to reduce their national herd.”

“We are always told efficiency is in the numbers, yet they are going to try to tell us we need to cap what we do,” the Clare-Limerick Charolais Club secretary concluded.