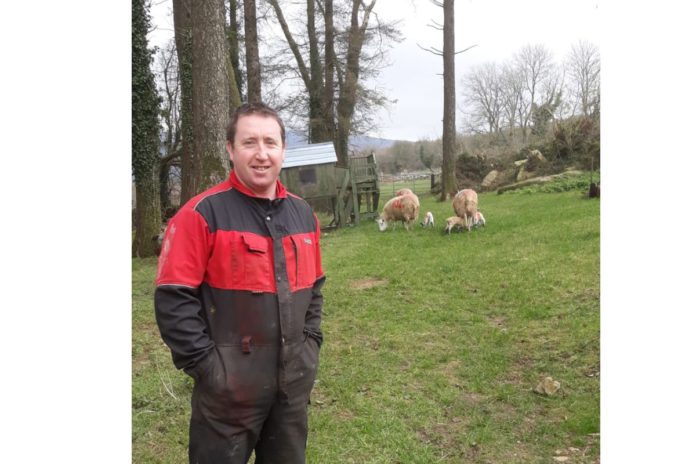 Alan Doyle is a sheep and suckler farmer from Gowran, Co. Kilkenny.

He is involved in the running of three farms at present – his owns and manages his own operation and assist with the running of his father’s farm as well as a neighbour’s tillage enterprise.

“I bought 116-acres and three commonages up in Mount Leinster in the last 6 years. I have sucklers and sheep. I got going around 6 or 7 years ago.” he told That’s Farming.

“The farm is predominantly sheep – there wouldn’t be a lot of cattle up on the ground that I have. They’re all upland sheep – I have Cheviots and I breed the Borris ewe, which is a Cheviot ewe crossed with a Suffolk ram.”

“The Borris is a very good seller and very good to breed. I lamb them indoor and they’re going quite well. They scanned around 1.77.”

He is currently attempting to build up his flock and is lambing 180 ewes this year, having started with eight ewes five years ago. This year, he changed his breeding strategy in order to finish more lambs, adding Suffolk into the genetic pool of what was mainly Cheviot blood.

“I was hoping to get to 200 this year but that didn’t happen. I’m aiming to be at 300 ewes in two years’ time and maybe 20 good cows as well.” the Kilkenny native admitted.

Doyle said he wants to make the most of the ground that he has and push it to greater levels of productivity.

“It is suitable for cattle but at the minute I don’t plan on putting cattle up the mountain; I’m happy enough with the sheep up there.”

“I’ve been doing a lot of reseeding and cleaning up to get the land right. I’m just making the most of what I have.”

“I’m in the Grass10 programme at the minute and I’m trying to grow as much grass as I can. I’m paddocking fields that are too big or not the right size, but my flock is growing all the time so it’s all temporary fencing. In three or four years’ time, I hope that it’ll be all paddocked.”

He currently breeds Angus and Hereford cows on Charolais bulls and recently purchased a new bull at Elphin with a plan to build his herd. Alan and his father have close to 90 cows between the two of them.

“It all depends on the cow and I select sires that will suit her. The Limousin bull is mainly for the smaller cows or heifers, while the Charolais sire is suitable for mature cows.”

The Doyles have a split herd, calving between the autumn and spring, and also rear Friesian calves, buying them directly from farmers and selling them on again at a year-and-a-half.

“We find it good in fairness. It holds money together – it doesn’t make a lot of money. I buy them directly from farmers because you know what you have then. It’s that bit safer.”

Before he started farming on a full-time basis, Alan, who was named the 2019 National Rural Network biodiversity farmer of the year as well as drystock farmer of the year in November, was a P.E. teacher. “The wages weren’t in it so I bought the farm and said I would go at it full-time, which I have done.”

“We had a lot of stock at home and I was stretched trying to be everywhere, especially when the land is segmented. We would have land that is 26 miles apart.”

Doyle warned that if anyone else wanted to follow the same path as him, leaving one career to go to another as a full-time farmer, they have to ensure it is financially viable first.

“We all want to go farming but sometimes it doesn’t pay. You have to make sure you do your figures before leaving your job.”

“The reality of it is it’s harder to go full-time farming now, a lot of people are gone part-time.”

If you want to share your story, email – catherina@thatsfarming.com