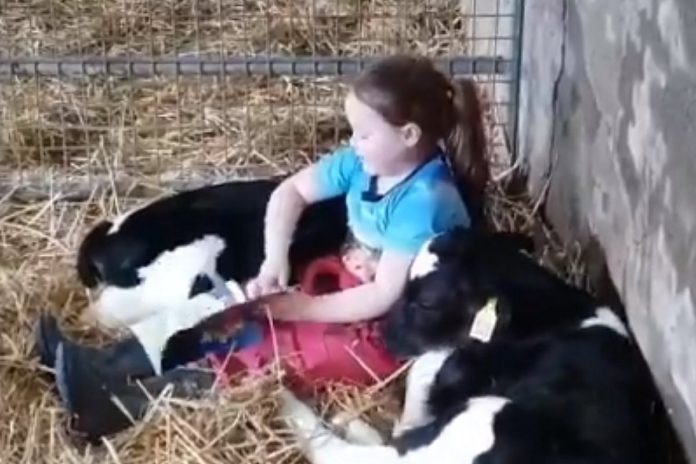 Following on from last week’s attempts on social media and radio, the Hynes family has started a petition to get PETA UK to remove a video, belonging to Peter Hynes, father of Georgina Hynes reading to two calves on their dairy farm.

PETA UK used this video to portray their own message about animal welfare. The use of the video caused uproar in the farming community, as reported by us here.

On Sunday evening (April 5th), Peter Hynes issued an update on his Twitter page in regard to the ongoing issue. He said: “Quick update for you all regarding the situation with PETA using our video. We have contacted all the relevant authorities & further to that we have also started an online petition, we would appreciate if you would consider signing it & also possibly sharing it yourself.”

The petition went live at 7 pm last night and has since amassed over 440 signatures. Speaking to the That’s Farming, Peter said the reason for the petition was “to chase this up from a few different angles”.

“Because it’s one individual in the video, we own the rights to it and GDPR is very clear on that. GDPR overrules Twitter rules.”

The family has been doing their utmost to fight this cause. They have used their social media following as well as national radio to express their concerns and confront PETA on the matter. However, at the time of writing, the video has not been deleted from the PETA UK twitter page.

When asked about how certain he is about getting the video removed, Hynes reaffirmed his confidence on the matter, saying “I have every intention of getting that video taken down.”

Some sections of social media have claimed that PETA is gaining from this controversy, as it has given them the publicity that they need to raise awareness to their cause, and have condemned Peter for that reason.

On this, the dairy farmer told That’s Farming: “I think there’s a lot of hypocrisy out there. I’ve genuflected to animal rights activists before but I’m not doing it this time. I’m going to stand up for what I believe in.”