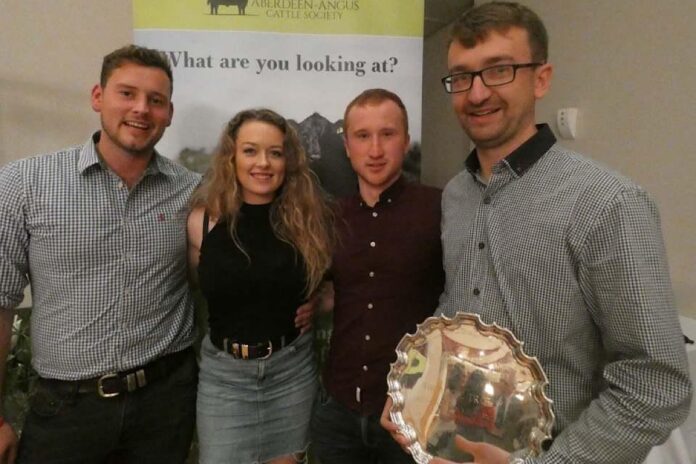 Bryan O’Halloran from Bandon, Cork, a first-generation Angus breeder, farms a 40-cow pedigree herd on 120-acres of owned land in partnership with his uncle, Tim.

He established the Briarhill Aberdeen Angus Herd sixteen years ago while attending school by purchasing his own cow and bull calf. He later acquired another cow with funds from the bull calf’s sale.

The Cork native gained valuable experience working with cattle during his young career and achieved “some very beneficial qualifications along the way”.

He is a former student of Cork Institute of Technology, where he graduated with a honours degree in agricultural science.

“In 2018, I began working with Greengold Farm Advisors Limited in Macroom, County Cork. I discovered my passion for farming at a young age,” Bryan O’Halloran told That’s Farming.

“In 2005, I started showing at Bandon Show with the Burke Family. From then on, my parents and the Burke family started bringing me to agricultural shows the length and breadth of the country.”

“I entered the young handler’s class at each show, which I had some great success in over the years.”

“I progressed onto attending the Munster Aberdeen-Angus Club YDP workshops which were held in the Munster region where I learned an array of different skills”.

Bryan wishes to encourage all young livestock enthusiasts to get involved in young handler sections at shows or workshops in the regions to gain valuable information.

“As I gained more experience and confidence over the years, I began to qualify for Irish Aberdeen Angus Association YDP finals held each autumn. It was a great honour to represent my region at the grand finale each year.”

“In 2019, I won the senior section of the Aberdeen Angus YDP competition. I was awarded a travel bursary which I could use to venture anywhere in the world to study Angus cattle. So, there are massive opportunities.”

Bryan and his uncle gradually built their herd by retaining 5-10 females annually and purchasing cattle at Irish Aberdeen Angus Association sales along the way.

He and his uncle plan to make these family lines the herd’s cornerstone over the coming years. He has recently begun flushing some of these high-profile females to speed up the process.

“I have only started ET work since October. It is new to me, and I am learning all the time. It is the quickest way of making genetic progress and growing these female lines throughout the herd.”

“The best bulls from around the world are sourced when flushing these cows and keeping the breeding programme and markets in mind.”

They like an above average-sized Angus cow, approximately 800kgs with strong maternal traits, length, good feet and legs and all-round good conformation.

“We are aiming for the above-average sized cow whilst maintaining calving ease as we feel we need to move with the times.”

“From my role in the farm consultancy business, I see that not only are Angus the number one choice for the dairy farmer, now, they are also starting to become popular in suckler herds across the country.”

“There are attractive bonuses, and progeny can be finished quicker. This is more important than ever with emissions and sustainably being the topic of conversation at present.”

The breeding focus of the herd is on ease of calving.

“The dairy market is the biggest market. Other key areas we focus on are carcass weight and conformation combined with food efficiency.”

The herd uses mainly AI across the herd – selecting “the most superior sires” possible worldwide.

Some of the AI sires the family use are:

They also run two stock bulls, Mogeely Minto and Mercury Royal Figo, to mop up after AI  as their land is fragmented. According to the family, this keeps the herd’s calving interval as close to 365-days as possible.

“After a successful breeding season, I, alongside my uncle, calved down forty pedigree Angus cows in autumn 2021. So, this will give you a perspective of how far the herd has come in a short space of time.”

“I like to keep my herd’s calving interval as close to 365 days as possible. I need a calf per cow a year to run an efficient, profitable business.”

“The aim is to have the majority of the herd calving in September and October.”

“This ensures bulls are well grown come sale time at 16-18 months to go with large numbers of heifers or cows. Keeping calving as compact as possible also allows me to focus on my full-time job.”

They replace 5-10% of the herd annually and export the remaining heifers to Europe as maiden or in-calf females.

The Cork family sell their bulls from 16-18-months-old on-farm, with some purchases coming from Scottish farmers or through society sales.

“I sell bulls at sales and at home. In my opinion, there is a massive demand for Angus bulls.”

“The bulls I took to society sales last year averaged €3,000. There might have been two bulls that made €3,500, but they averaged around that price down through the years.”

The O’Halloran family implements a strict culling policy for empty or old cows, slaughtering cows at Rs and some Us with a 50%+ kill-out rate.

Bryan, the incoming chair of the Irish Aberdeen Angus Association Munster Branch, feels the breed is in a great place.

“The Irish Aberdeen Angus Association has undertaken some excellent work in recent years.”

“With Brexit looming back in the tail end of 2020, Irish Aberdeen Angus breeders were threatened with losing the pedigree status of their cattle.”

“However, due to trojan work carried out, this got turned on its head. Now, the Irish Aberdeen Angus Association has become the European base for the breed.”

“This has resulted in a major boost in status and financial gain for the IAAA in Ireland as the registration headquarters for the breed across the EU.”

“This has also brought big challenges administering the herd book for all of Europe from a small society. However, they have taken it in their stride by forming a strong team.”

The future of the Briarhill herd and Irish suckler farming

Coming second in the All-Ireland Finals at the 2019 Dualla Show with Shivas Elijah, who later sold to Gigginstown Angus, was their latest prize before the Covid-19 pandemic struck.

As mentioned, the O’Hallorans aim to build their herd through ET work and AI’ing on their high-profile females.

Bryan is satisfied with his herd size is at 40 pedigree cows, and with his full-time job, he believes it is a “happy number”.

“In my opinion, there will always be a place for suckler cows in Ireland. However, we will have to move with the times and become more efficient.”

“Through my travels around the country with my job, in my view, there will always be a place for suckler cows due to land type and terrain. They especially suit the west of Ireland and part-time farmers.”

“In my view, it is building up to be a promising year for the Angus breed yet again.”

“Angus seems to tick all the boxes for all the above links in the food chain. The quality of meat sets them apart from other breeds. They can be finished more efficiently, which is quickly coming down the line.”

“As pedigree breeders, we must aim to drive the breed forward and aim to breed the best males and females possible to suit the different markets.”

“This will have a knock-on impact on improving the standard of commercial cattle nationwide,” the Irish Aberdeen Angus Association national council member concluded.