Joe studied a farm management course for three years. He managed a dairy-beef and tillage farm for over fifteen years in Cork before moving to the Midlands.

The family also purchased Ebon Hill Extra Gold. This bull did very well at the beginning of the Westmeath farm’s pedigree journey.

“Gerry was involved with the Angus breed at the start, and he was his main advisor when it came to purchasing females, Joe O’Mahony, a Clonakilty Agricultural College graduate, told That’s Farming.

“This gave us a great start as Michael had something nobody else had, which was different genetic bloodlines.”

“He also bought some Irish females from Irish herds at the same time to supplement them.”

“Michael’s father, Ted, always had some involvement with land. He always kept a few cattle and horses.”

“Michael grew up on farms, so it gave him a feel for it. He liked the idea of basing his home on a farm and rearing his family on a farm.”

“It is a good start, and it keeps him grounded. When he comes home from his business, it is a relief for him to spend some time on the farm.”

The herd continues to make waves with its most association being that to an animal that sold for what could be the highest price for a Red Angus in Europe.

Gigginstown House Celtra, a black cow, is the dam of Mercury Red Unbeatable Kim ET, which made €13,200 at the Irish Angus Cattle Society’s show and sale at Carrick-on-Shannon in recent weeks.

Furthermore, Joe purchased a May-2020 born bull, Drumcrow Twenty Twenty, for €6,100 at the same sale on December 11th from the late Frank McKiernan.

“Anywhere we see a nice animal selling well, we will try to supplement something we think will add value to the herd. We will add up to four heifers a year to improve the genetics of the herd.”

Joe’s ideal pedigree Angus breeding female is 700-800kgs, is medium-sized with a nice head, good topline, four good legs, easy fleshed and easy calved, has good width, has a short gestation and can calf without assistance.

They are a very popular breed with dairy farmers in the country. Most dairy farmers have an Angus stock bull to serve heifers or mop up cows.”

“They are a very quick finishing animal if you are producing beef. You could finish heifers in 16-18 months. In the current climate, there is going to be a big push for killing cattle at an earlier age. You can get them away as steers at 24-months.”

“Angus is an easy breed to keep, easy calved, has plenty of milk. They look after themselves and are very suited to a grass-based system.”

“It gave us an advantage that they were outcrosses. A lot of the Red Angus currently on offer would come from similar bloodlines.”

“They are quite popular at the moment and seem to be topping all the sales. A Red Angus nearly tops any sale that you see.”

Gigginstown Angus uses ten stock bulls due to the labour aspect of AI and working in a large enterprise split into four units mixed with bloodstock.

Joe uses a Red Angus stock bull to serve heifers with the Red Angus gene on the farm and AI’s any heifers that require ET work.

The breeding programme commences on the farm from December 1st, with 20 cows served per bull- to avoid lameness, injury or empty cows – due to infertility.

“There is a very good genetic pool in Ireland. It is not that we do not think the bulls are good enough.”

“However, from a practical point of view, with the number of farmyards having to watch them and bring them in for AI, it is not conducive for us to use it.”

“We buy several bulls each year as some of the bulls get injured or are getting on in years.”

“You constantly have to purchase new bulls, which is good for the trade as well. It gives us a chance to get new genetics and keep up-to-date with whatever is popular in the show ring or sales.”

“Whatever is selling well, we will try to keep our eye on and see if we can pick up something along that line.” 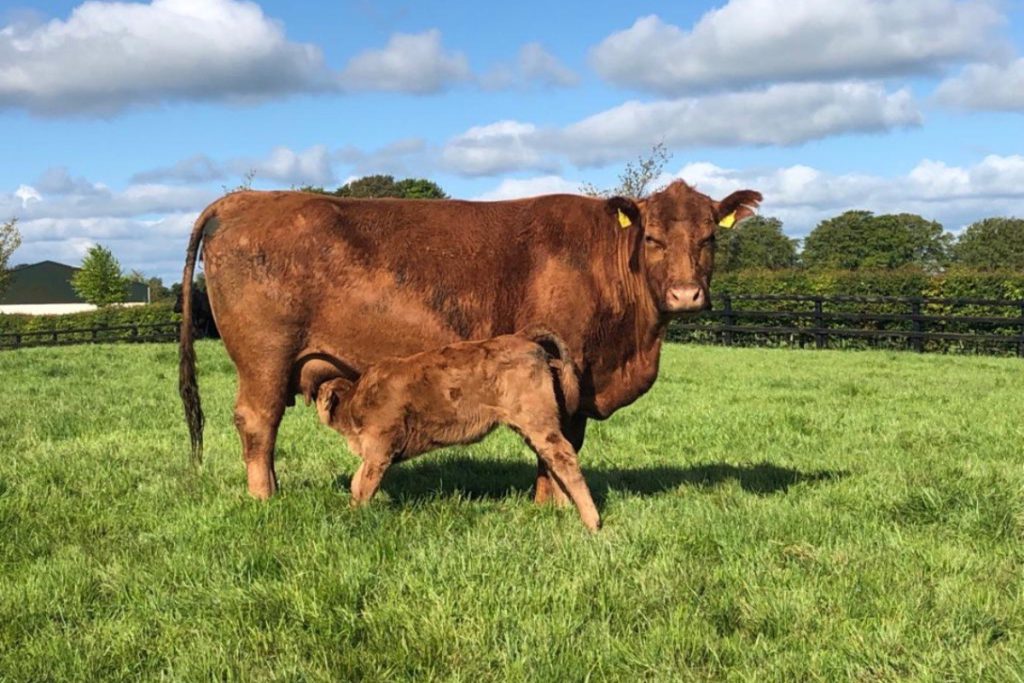 The farm begins autumn-calving on September 1st, with spring-calving in January. According to Joe, 80% of cows in the herd is calved by February.

According to Joe, this is achieved by no intervention required, giving cows mineral boluses, by the cow not retaining after birth, and a minimal amount of difficulties – meaning the cows are cycling easier and go back in-calf quicker.

“Autumn-calving gives an advantage that the following spring twelve months you have a bull 15-18 months for the spring sale.”

“Then, in the autumn, you have late spring-born calves to run the following autumn when we sell them at 12-18 months.”

“We prefer to sell a stronger animal that is not overfed, is natural in condition, and can carry their weight.”

“Before, we calved heifers at 30-months, and it gave us the advantage; the cattle were much stronger.”

“ICBF wants us to calve at 24-months because of climate change, and it is more efficient. It does lead to a smaller heifer calving at 24-months, but they will grow on at 24-months over time.“

The herd retains 20-25 heifers, culls 10% of cows annually, alongside selling 25 bulls and heifers each at its elite Angus sale every April.

He listed a high interest, stock quality, virtual bidding, and work the Gigginstown herd PR department completed as the main drivers of its success.

“We target 60%-70% of our bulls towards the suckler market. They are bulls that carry a good frame, are easy enough calved, will grade, and will be easy fleshed.”

“For the dairy farmer, you might have a slightly smaller bull with a shorter gestation, smaller calf at birth and not as heavy of a bull for suckler cows.”

“There has been good export demand the last number of years. We export some of the lower-merit heifers each year, and that helps keep the standard of heifers at the sale.”

The Westmeath farm aims to host its annual sale next year with a mixture of ringside and online bidding.

He also brings other bulls to the market with a restriction of 15 bulls feeding per time rather than 50 bulls  – to avoid bulls getting heavy or overfed.

“Because of the way autumn and spring-calving is, it means there is always a bull of an age there to sell.”

The family buy in 125 Angus-cross store cattle, which grade Rs and Os when slaughtered. According to Joe, Angus bulls grade Us and Rs, and commercial heifers grade Us under 24-months.

“We try to feed cattle 6-8 weeks on grass before killing. We bring them up to 6kgs of ration to get a proper kill-out.”

“To note, we find beet stimulates their appetite and helps get into a decent fat score. We will not feed any more than 6kg a day because it will be either be too expensive or cause cattle to be too loose.”

“Sales dictate your success as a pedigree breeder. Our product seems to be selling, and we seem to be producing what the market desires.”

“You have to be efficient at pedigree breeding and have to produce something cost-effective.”

“It goes back to watching different sales. What we find is breeding well and what bloodlines are showing the right animal. We will try to use some of them bloodlines.”

“In the early years, the O’Leary family would have had more time and shown very successfully. They won several All-Ireland triumphs with bulls and cows at agricultural shows.”

“The reasons were being due to the size of the farm and that we have our on-farm sale every April, so that is our show now.”

“Also, we are buying at different sales as we have our own brand recognition at this stage.” 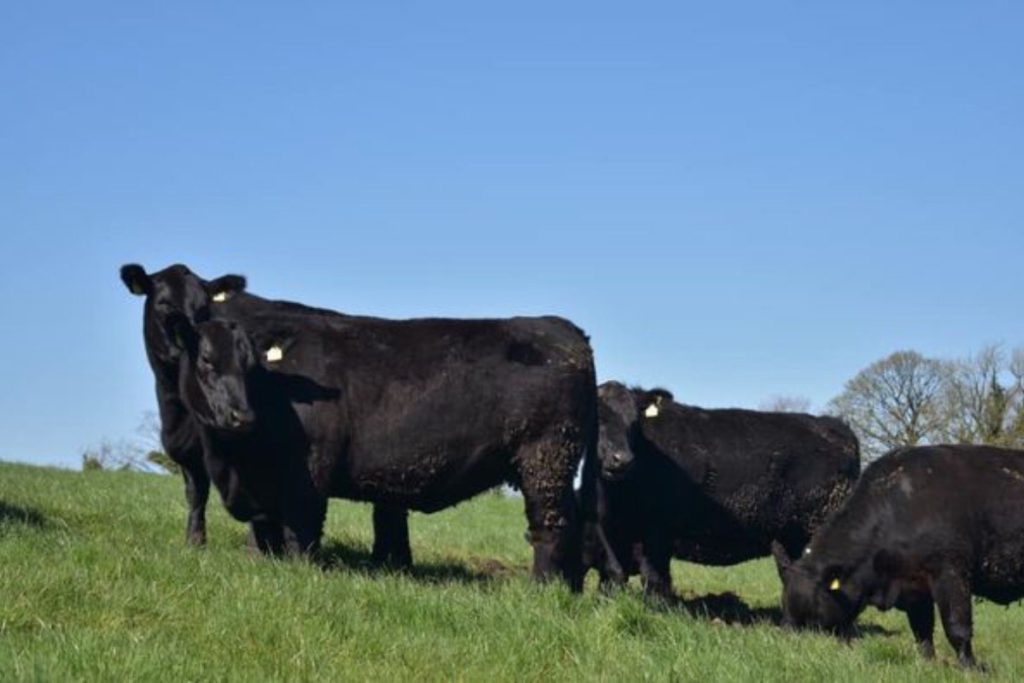 The farm manager shared his thoughts on the future of the family farm.

“For people who have a smaller land base and more fragmented land, it is more difficult, and it is one of the few options they have. It is certainly going to be more difficult, I imagine.”

“There will always be demand for the good quality animal. This will certainly put Ireland in a better light than most countries as we are grass-based.”

“Most suckler farmers are not over-reliant on fertiliser. They tend to be organic. Therefore, from that point of view, there is a demand for what is considered green and organic.”

“You hope the suckler farmers product will be in demand and be desirable because it is partly organic. Finally, factories seem to be paying for that at the moment.”

“We have been geared towards a grain-fed beef animal through the way cattle are graded rather than what the market and the housewife is looking for in terms of the quality of meat.”

“Europe has dictated that we look for a more factory-type animal that is easily trend and condition scored.”

“If you look at America, Asia, and Australia, they have always been dictated by the quality of the product in terms of taste.”

“The traditional breeds have nearly always dictated that, whether it is Hereford, Angus or Shorthorn, and crossing all them breeds through other breeds,” the manager of Gigginstown Angus concluded.