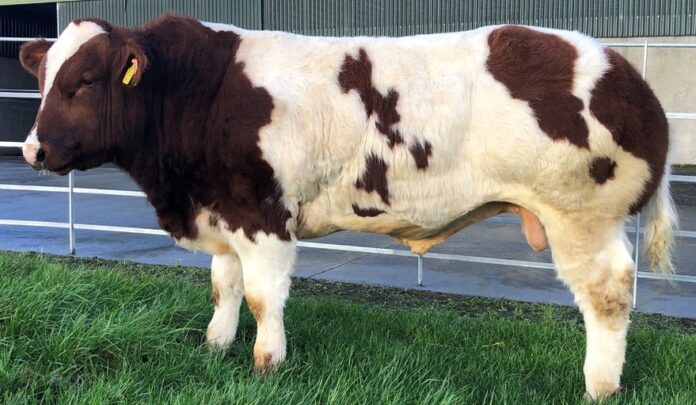 Ahead of the sale, the family said:

“I have never been to the rainbow’s end, but I expect it is something like this fella you’d find there.”

“He will leave all the colours that will, in turn, leave you a pot of gold. I have been to Belgium several times, and I can tell you there is no red and white calf like him there.”

“He is a very rare and special calf. Looking past his colour for a moment, he also has everything else you would desire in a bull.”

“He had enormous width and length, full up of the plates and a softness, not every blue has.”

“He also has four super legs with bone, and how often do you get all that and still calved naturally herself this spring and a bag of milk that would not be out of place in a parlour.”

“This calf was a handy calf born himself, which would lead me to believe he will also tick the easy calving box,” they concluded.

Topping the female category at €22,500 was lot 1, Pretender to the Crown, a March-2022-born red and white Belgian Blue-cross.

The McGees believe that “it is only a matter of time before she surpasses her mother and takes her mantle as one of the true greats”.

They said: “Whilst we would love that to happen to here, it is with a heavy heart we offer her for sale, in the hope that a heavy pocket might go some way to easing the loss.”

“She is as near as it gets to perfection for a foundation flushing female. With a sire stack behind her second to none, she is undoubtedly destined for great things,” they remarked.

- Advertisement -
Previous article
450 cattle for Cootehill’s fatstock sale with over €2,000 in prize money
Next article
Pics: 6 of the highest-priced females at McGee’s sale as heifers to €22,500