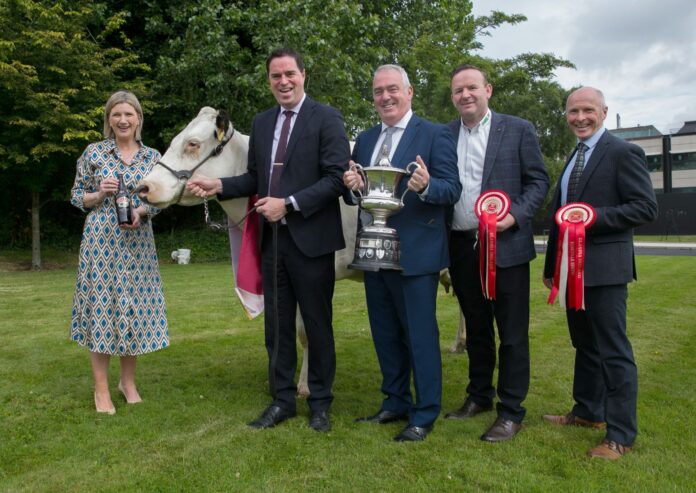 The Diageo Baileys Champion Dairy Cow will return to this year’s Virginia Show in Co. Cavan on Wednesday, August 24th, 2022.

Diageo Ireland and Glanbia Ireland, are inviting Holstein Friesian breeders across the island to participate in the competition, following a two-year absence.

David Booth of the 120-cow Feizor Holstein herd in North Yorkshire will officiate as the judge.

He stated that he will seek “a balanced cow with strength” at this year’s event.

This will be the UK breeder’s first judging role at an Irish show. The fourth-generation farmer has judged at many shows throughout the UK.

EU Commissioner Mairead McGuiness will be the guest of honour at the event. She will be joined by the chairman of Glanbia Ireland, John Murphy and Robert Murphy, head of Baileys Operations on the island of Ireland, to present the cheque for €2,500 prize and the Virginia Milk Products Cup to the breeder of the ‘2022 Diageo Baileys Champion.’

At the official competition launch, Minister of State at the Department of Agriculture, Food and the Marine, Martin Haydon, said the competition helps shine a light on the country’s reputation as a “world leader” in grass-fed dairy production.

He said it is an endorsement of the “ever-improving” breeding practices farmers across the country are undertaking that “go hand in hand” with sustainable milk production.

Aoife Murphy, director of Ingredients at Glanbia Ireland, said that the event is the “centre-piece “of Virginia Show.

She added that the local community have “missed” both the competition and show due to the Covid-19 pandemic’s impact in recent years.

Robert Murphy, head of Baileys Global Operations, added that the Diageo Baileys Cow underpins the quality of the raw ingredient in the “world’s top-selling” liqueur brand, Baileys, which is sold in 160 countries.

Its supply chain partnership with Glanbia goes back to the 1970s.

He outlined that the Diageo Baileys Champion Dairy Cow has been a “great” success in highlighting the “superior” genetics that goes into the national dairy herd.

- Advertisement -
Previous articleOpinion: Farmers will not get credit for adopting renewable energy
Next articleVIDEO: ‘I lost my balance and fell 14ft’ – farmer on accident