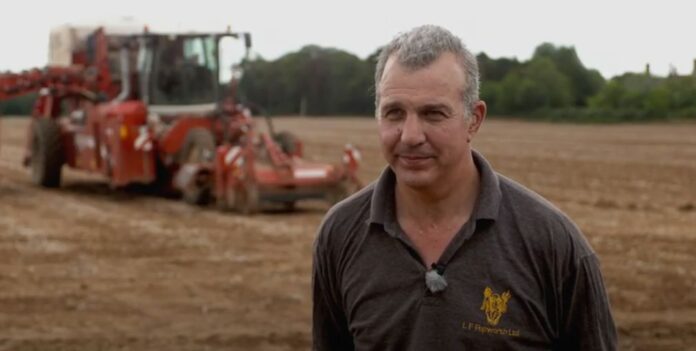 VIDEO: ‘I lost my balance and fell 14ft’ – farmer on accident

Tim Papworth is a third-generation potato farmer and farm accident survivor who “learnt safety by accident”.

Some years ago, he was changing a light bulb in a potato store when he slipped and sustained life-changing injuries, which have impacted him mentally and physically.

By sharing his story, as part of Yellow Wellies’ (Farm Safety Foundation) campaign, he hopes that he can prevent “this happening to someone else”.

The accident has made him slow down, and now, he thinks about “every single process every single day”.

As a potato farmer, September and October have always been busy months in Papworth’s calendar.

One day, his team were moving potatoes into a new store, and he went into the building to see how work was progressing.

One of his employees told him: “Tim, we cannot see as the light is gone,” so he climbed a ladder to replace the bulb with a new one that he had on hand.

“I took the old one out, put the new one in and then somewhere along that path, I lost my balance and fell 14ft to the concentre below,” he explained.

“That is when I sustained a serious head injury, changing a lightbulb. By rights, I should not be here.”

The air ambulance flew him to Addenbrooke Hospital in Cambridge, where he spent five weeks in a drug-induced coma.

He broke all ribs on the left-hand side of his body and was paralysed, had a punctured lung, two bleeds on his brain and could not speak, which meant that the only way he could communicate was by writing notes on paper.

During his recovery period, his family stepped in to run the farming business, and they were “left with a jigsaw puzzle with a big piece missing, which was not easy for them”.

Tim had a titanium plate fitted on one side of his skull and has made a full recovery apart from impaired hearing in his left ear.

He explained: “Fortunately, I have not got much brain damage. I am deaf in my leaf ear as the right-hand side of the brain impacts the left-hand side of the body. As a result, I was paralysed for a while; I could not feel my left arm for three months.”

“I could wiggle my toes on both feet, but I could not actually pick my left arm up; it just hung there. Lots of things happened,” he added.

“I had to start to re-learn my life. I am a changed man, and it was a life-changing encounter that put a lot of pressure on my family. The incident put my wife and I through sickness and health,” he added.

His message to the public is this:

‘When I was 23, I lost my left arm’ – farmer’s incident with PTO shaft

- Advertisement -
Previous article€10k ‘Bailey’s Cow’ is back: What is the judge seeking?
Next article‘Typical solar PV installation on 100-cow dairy farm involves €15,300 investment’