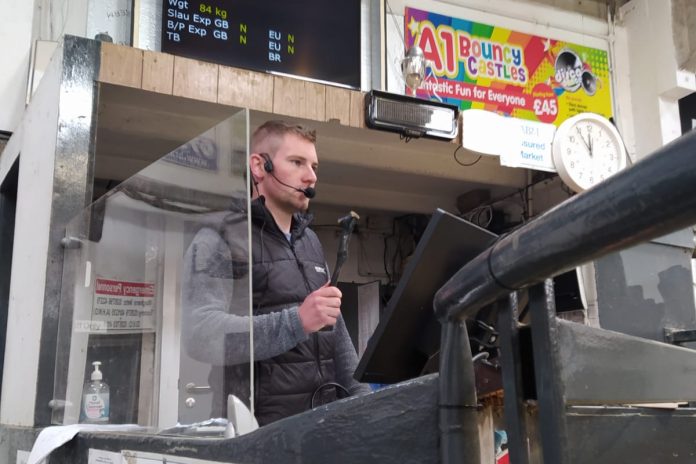 At twenty-four, Raymond O’Kane is one of the youngest livestock auctioneers in the country.

The Dungiven, Co. Derry native grew up on a 40-acre farm which was farmed by his father and his grandfather before he took the reins.

“My Granda kept 8 -10 cows but never bothered with any sheep. When my father started farming, he introduced sheep to the farm, running a flock of 40 to 50 breeding ewes,” he explained to Catherina Cunnane, editor of That’s Farming.

Since Raymond has started to farm, he has increased the numbers of breeding ewes to just over 100 head, and also rears dropped calves each year.  “I mostly farm now by myself, but my dad still helps out when things are busy.”

A passion for livestock marts

Raymond began going to livestock marts at a very young age with both his father and other neighbouring farmers.
“I always remember the great buzz there was about the mart. People were there to socialise as well as to sell and buy stock.”

“I always admired the auctioneer when I went to the mart at a young age – I was intrigued by the way they could draw everyone in and keep their attention and, of course, how they could speak so fast.”

“I didn’t really realise I wanted to be an auctioneer until I started my first job in a livestock mart.” added Raymond, who works in NCCE Country Store.

He began working at Swatragh Livestock Mart three years ago when he was twenty-one. “I started in the mart helping out with droving sheep and some office work as well.”

“When I was there for nearly a year, I also started clerking alongside the auctioneers. I think it was when I was up in the rostrum and could see all the action going on, that I realised, I’d love to do this.”

“I mentioned my interest in auctioneering to the manager, Paul Coyle, and he kindly said he would let me give it a go.”

The following week, he was set to carry out his assigned duties as a clerk, as normal, when he was approached by one of the mart’s livestock auctioneers.

“Before the sale started, Ciaran Laverty, who was selling that day, asked me did I want to sell a few lots.”

“At 21, I was really nervous, but I couldn’t miss the opportunity. I remember sitting down on the chair and my leg started shaking uncontrollably. I don’t think I ever was as nervous in my life.”

“Fat ewes were sold first so, I just started asking what I thought the first pen might be worth and it all went from there really.” 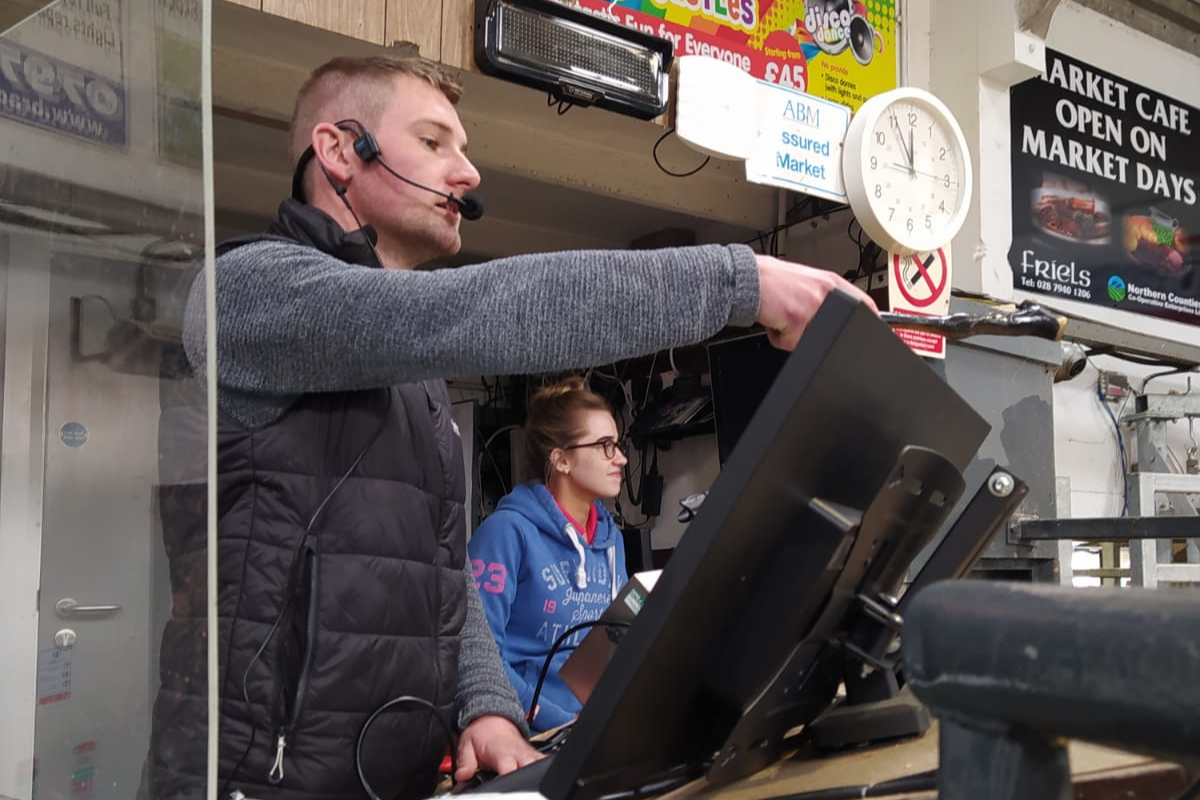 To become an auctioneer, he believes that patience is of upmost importance. “Not every sale will go well. It’s like anything, you have to be prepared to take the rough with the smooth.”

“I think it’s very important to put plenty of life into a sale. If you start the sale off on a high, there’s a good chance it will stay there.”

“Before I began auctioneering, I only ever seen the seller’s side of things, wanting as much money as possible for their stock, but the buyer is just as important.”

He pointed out that the seller wants as much as possible and the purchaser wants to buy as keenly as possible. “Finding the ‘sweet spot’ in the middle is what a good auctioneer is able to achieve,” he added. 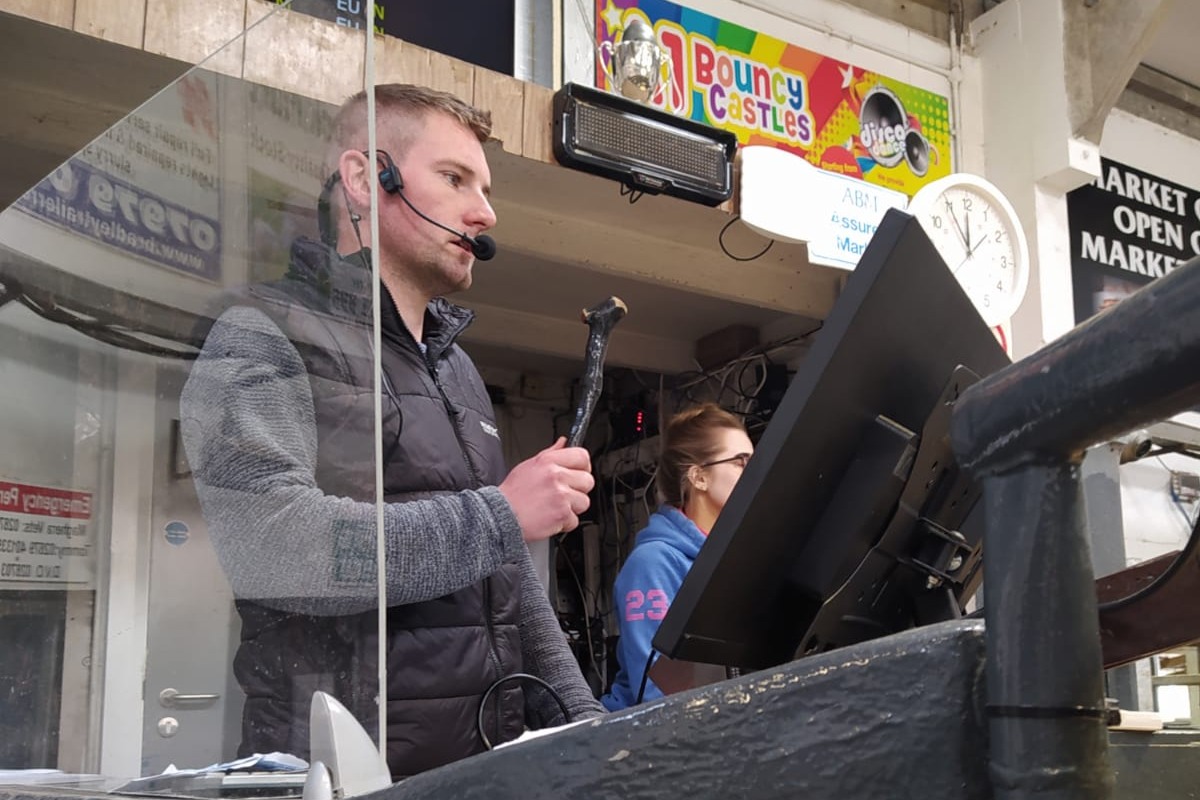 When he first started to chant, he listened to a number of auctioneers and picked different rhythms and filler words that he liked from them.

“These blended together made my own chant, but if you break all the fast-talking down, it’s just numbers really, with words in between like ‘good ones again” or “the ones going out” to connect them together.”

As a young auctioneer starting out, it can be very difficult to find your feet, especially as there are fewer marts operating now, he acknowledged. “You have to take every opportunity that comes your way including charity and machinery auctions, for example, to build your profile.”

He currently officiates as auctioneer at Swatragh Livestock Mart, selling cattle every Monday and selling sheep (mostly breeders) on a Wednesday or Thursday evening. If an auctioneer is unavailable for a Saturday sale, he fills their shoes.

“I’d like to take this chance to thank the management of Swatragh Livestock Mart for giving me the opportunity to begin auctioneering and also to the other auctioneers, Ciaran Laverty and Stephen Redmond, for giving time out of their sales to allow me to gain some experience and for their help and advice since I began selling.” 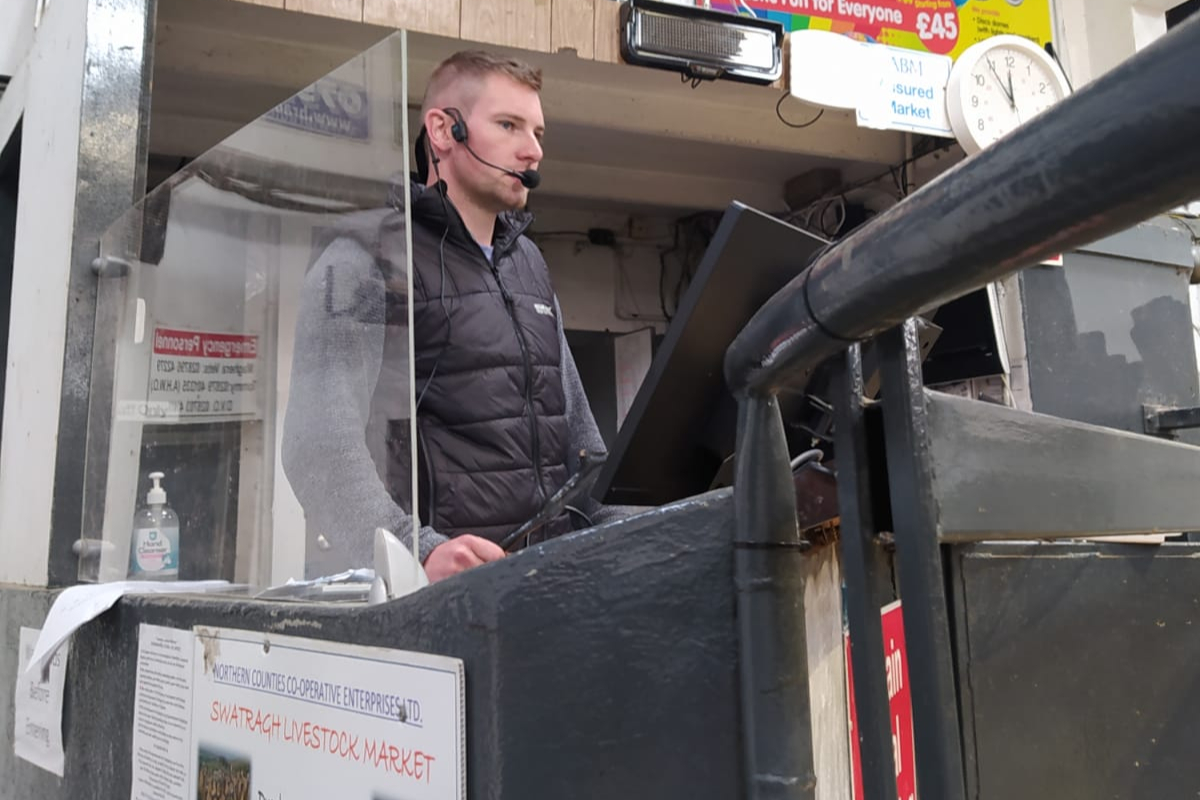 O’Kane’s future plans are to expand into auctioneering at more sales and other marts when opportunities become available, with the hope of becoming a full-time livestock auctioneer in the future.

“Livestock marts are hugely important, not just financially for the buying and selling of stock and making sure the seller gets a fair price, but socially as well, for farmers to meet with each other.”

“We’ve seen how the lockdown, due to coronavirus, resulted in the closure of livestock marts and how many farmers were not able to sell stock to generate income.”

“Thanks to technology and online platforms, we can now offer those services without having to be on the premises if needs be.”

He said it proves how the mart industry can change rapidly to meet the needs of their customer base in order to continue to provide their “very vital” service.

“What I have learnt since I started auctioneering, is that all you can do is try your best. Sometimes you cannot please everyone, but every day is a new sale day.”

“I started off selling sheep, and only quite recently started selling cattle.”

“I could not choose which category is my favourite. I suppose it means I love what I do when I can’t choose between them.” the 24-year-old concluded.

To be featured as part of our livestock auctioneering segment, email – [email protected]