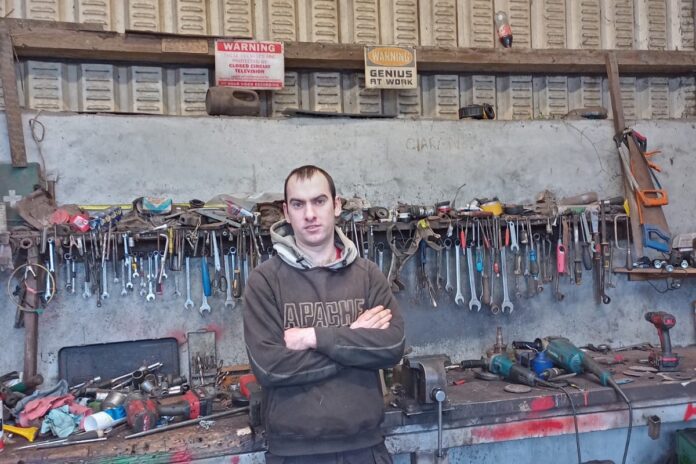 Following this, he bit the bullet, took out a €16,000 loan, and established his agricultural contracting business to buy a Massey Ferguson 390, a Krone 1250 round pack, a Kuhn mower, and a McHale wrapper to offer a silage baling service.

He made around 1,500 bales in his initial year, 2,500 bales in the second year, and carried out approximately 300 hours of mulching in year one.

He believes the mulching put his name on the map in year 1, with baling slower to build up.

“Growing up, we had a small farm at home. My father, Tom, got out of farming when I was young, and I suppose there was no farming at home,” Tony Kenny told That’s Farming.

“I was always mad into machinery. So, I did the Leaving Certificate, applied in secondary school, finished school around seventeen, and then was a year out of school before I started working for Mulroy & Sons Farm Machinery in Swinford.”

“At that stage, I was nineteen and have been there ever since, working as an agricultural mechanic for the last eleven years.”

Tony operates the business, employing two part-time staff and a full-time operator during peak times, serving a 30-mile radius of his yard, including areas in Mayo such as Bofeenaun, Lahardane, Crossmolina, Foxford, Straide, and Ballyvary.

KENNY AGRI built up its customer base through word of mouth and digital media.

Tony takes time off from his job from May to September for silage season, some mulching and slurry spreading, with additional slurry spreading from February onwards and hedge-cutting and bale haulage.

Baling is the firm’s most popular services, which continues to increase annually alongside client numbers, with a bale count just shy of 6,000 this year.

“To be honest, baling and slurry spreading is the bread and butter, as they are two things you are guaranteed when you go out working.”

“Yes, there is always mulching that needing done, but with diesel prices, that service is too expensive to do by the hour.”

“Farmers are saving money and not doing as much work, and as I have seen this year, it was mainly baling and slurry spreading work done this year. It was a quiet year for mulching – I did over 100 hours of mulching.”

His tractor fleet includes two New Holland 7840s and one New Holland TM135, with most repair work undertaken in-house except for tractor splitting, which another mechanic carries out.

Every 300 hours, he services all tractors and performs one primary check-up on them annually. He feels having an engineer or mechanical background gives him an advantage because he said, “every hour, you are closer to a machine stopping”.

“You need to be able to fix machinery ourselves because you will not get someone to fix it in the summer. So, for example, if you have a baler that breaks down, you are not going to get a person to fix it; you have to fix it yourself.”

Challenges that impact him in the industry include rising machinery and part prices, diesel costs and agricultural contractor rates.

“Everything is going crazy, and the only way I can see me doing it [agricultural contracting] is by buying second-hand gear, so you get that better value. I do not know how anybody would buy new tractors or machinery; it is hard to get your money out of it.

“I think no person is ever happy with the rates they are getting, but I suppose they are not bad and had to rise with fuel prices.”

“It is hard for the farmer that has not got the money to spend. They have a list of things to do, and if they have the money, they will spend it.”

“I feel it is a very uncertain time as no one knows what fertiliser prices this year will be – it is a strange one.”

Looking ahead, Tony d to focus on expanding his baling and slurry spreading service and keep a “fleet of fresh machinery”.

“In my view, as long as there are animals, they have to be fed, so there will always be silage and slurry.”

“In my opinion, it is not viable for a farmer to buy his/her own baler and machinery to do the job. For example, if you were farming, you would want to be doing at least 1,000 bales to justify a baler, wrapper, and mower,” the agricultural contractor concluded.