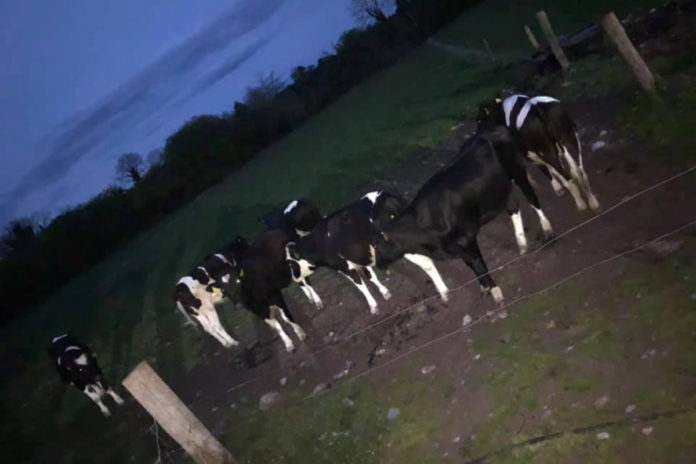 Seven heifers, which were believed to be stolen from a farm in Cloughjordan, County Tipperary over the weekend have been recovered.

The farmer offered a cash reward for the return of his cattle, which were reportedly taken from a farm between Friday night (April 30th) and Saturday, May 1st, 2021.

The farmer issued an appeal for information on social media Saturday, May 1st.

The post reads as follows: “I am looking for any info on 7 stolen Friesian heifers from Cloughjordan last night between the hours of 11 pm to 6 am.”

“The heifers are DNA tagged as this is not the first time we had cattle stolen. The guards and the Department [of Agriculture, Food and the Marine] are involved.”

In an update, the farmer said: “A little update. An older jeep and trailer [were] spotted driving erratically on the outskirts of Cloughjordan heading toward the Nenagh direction early Saturday morning at approximately 1.30 am.”

In a further update on social media last night (May 2nd), the farmer said: “I would like to thank everyone for everything that was done, all the phone calls, messages and shares over the last 24hrs.”

“They [the cattle] were dropped back approximately 3 miles from where they were taken, and the cattle were dropped off with a box because a few of them are lame and dirty, but if it wasn’t for each and everyone, spreading the word, we wouldn’t have got them back [at] all,” the farmer concluded.

- Advertisement -
Previous articleHow one month on a sheep farm changed everything for this 19-year-old
Next articlePhotos: 2-bed ‘quaint’ cottage an ideal restoration project