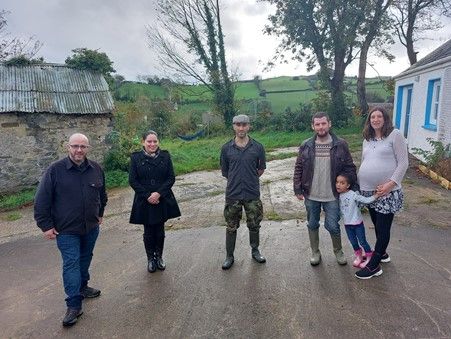 Irish farmers should take rising input costs as the impetus to change production methods to a more sustainable model.

That is the belief of Sinn Féin MEP Chris MacManus, who spoke following a visit to Siolta Chroi organic farm near Carrickmacross.

He is of the view that high input prices make a case for sustainable solutions.

In a statement on Monday, December 6th, the MEP said:

“These increases are outside a farmer’s control but have a big impact on their overall cost of production.”

On the energy side, he believes microgeneration on farms needs finalisation.

He said farms could be producing their own energy and selling surpluses back to the grid.

“It is evident that the solutions are there. It makes economic sense to make the transition now. What farmers need is strong leadership from this government.”

Furthermore, he said we are still waiting for the government to open the Micro-generation Support Scheme.

“This government must understand that every delay, in times of high prices, means farmers being pushed closer to a cliff edge.”

“In no other economic sector would it be common that only one-third of enterprises are viable.”

The MEP said his party is committed to “reversing the tide on farm viability”.

It desires to transform our family farm production model into the “most environmentally and economically sustainable” globally.

“What Gareth, Karen and Conan have created here is a shining example of how we can create sustainable organic farming models across the island.”

“We must support farms like this. It was a really interesting visit. I would like to thank them for their warm hospitality,” he concluded.