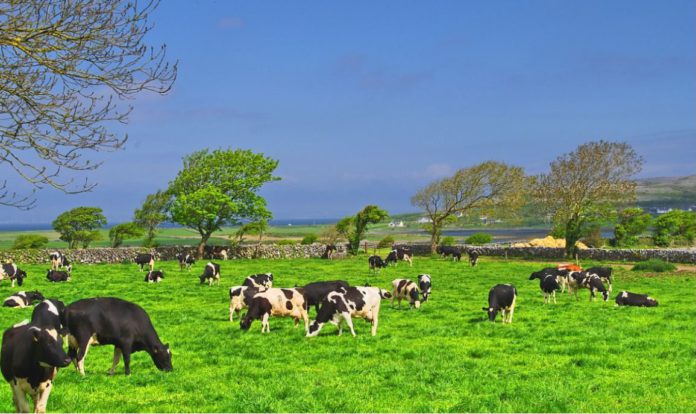 How to reduce SCC on your dairy farm

How to reduce SCC on your dairy farm – Top tips

He has advised farmers to milk record their herd early to identify high SCC cows and to seek the help of their Teagasc advisor, milk quality advisor or vet to help interrupt milking recording results in necessary.

Speaking on the Dairy Edge podcast with Emma Louise-Coffey in recent weeks, he stressed the importance of turning cows out to pasture where possible to reduce the bacterial challenge to cows and to take pressures off operators and facilities.

Don suggested using a disinfectant lime on cubicles for a week, but not to stop utilising other lime. He admitted that it can be a slow process that takes patience, but he feels it is effective.

Traditionally this would have been used once a week, but the milk specialist advises if you hit trouble to use the product every morning and evening for a week.

“Lime-based products that contain a disinfectant within them, they were used originally in farrowing houses in pigs to control E. coli scours. We are using them a lot more now on cubicle bedding.”

“What we are trying to do is reduce the bacterial challenge the cow is exposed to lying down. If you are going in with a liquid disinfectant, you will wet everything.”

“With this, at least you have the drying impact of the lime. From the number of farmers, I have been dealing with about this just in the last couple of weeks, the feedback is very positive.”

Don acknowledged that big groups of heifers calving in a short space of time tend to elevate SCC.

“It is usually stress-induced; she is into a new environment and is probably getting a bit bullied. The immune system is on overdrive, so she gets a high result.”

“Usually, they will sort themselves out. We are seeing this as such an issue now because I have so many heifers calving together.”

“If I have 30-40 heifers calved in a week, 5-6 of them could be high, so they will impact on my tank initially. Whereas if they were spread over 4-5 weeks, I would not have noticed it as much. The real issue is heifer calving with clinical mastitis; that is a big issue.”

He outlined that the majority of clinical cases of mastitis in heifers are due to housing.

“I think teat spraying the heifers, every day if you can, two-three weeks before calving is a significant help. Some farmers are teat sealing heifers before calving; it is too late to do that now. You would want to be doing that last November, December.”

The milk specialists feel it is mainly Streptococcus uberis mastitis cases being seen this year with limited E. coli cases, as most farmers are using a sealer.

“You have to take a sample to know what bug you are dealing with. The majority of them will be Stepuberis at this time of year. There is also a little bit of Staph mastitis as farmers are expanding, they are holding on to cows, and you have Staph carrying over into this year.”

“Usually, they break down six weeks after calving, so you have farmers who have calved at the end of January.”

“There could be a couple of those cows starting to break down with cell count now the last week of February, the start of March. People might see cell counts starting to elevate now as it goes on.”

Don advises treating S. uberis mastitis by intervening with an injectable antibiotic, broad-spectrum tubes and an anti-inflammatory with any type of mastitis.

“You need to talk to your vet about these anti-inflammatories; they are seemingly good, but you cannot overuse them either. For Streptococcus uberis, penicillin injections are quite good on it. Once you know you have Strep. Uberis, you can go in with specific treatments then.”

He is of the view it is imperative to follow the course of treatments advised by a veterinary practitioner to prevent mastitis from becoming a chronic case.

He acknowledged that this stops your herd from becoming antibiotic-resistant by following out the treatment needed.

“From talking to veterinary partitioners, they are promoting this from the point of pain management and an animal welfare point of view.”

“On mastitis controlling pain, inflammation and toxaemia are giving the cow her immune system and antibiotics a better chance to work. Try them and talk to your vet about them.”

Currently, Don estimated there are roughly 14-15 mastitis tubes that have a license.

“The availability of these mastitis tubes is becoming trickier; we cannot take it for granted that they are going to be available.”

“You need to make sure you know the one that is working for microculture. The availability is mixed at the moment, likely to get better, but I will believe that when I see it.”

He thinks booking your milking machine service right away is essential and that the biggest priority is getting a new set of liners in a parlour.

“If there is an issue with pulsation or vacuum or anything. It will do significant damage to cows going forward. If you intervene early, you will get good milk out of new liners with less residual milk left in the others, and everything is coming into place.”

Don outlined that approximately 40% of dairy farmers in the country are milk recording, representing up to 50% of the country’s cows.

He believes that the difference between the top and bottom cow can interns of profit can pay for milk recording.

Listen to milk quality specialist Don Crowley’s interview on how to reduce SCC on the Dairy Edge Podcast here.