That's FarmingThat\'s Farming Irelands Largest Farming News, Properties and Classifieds Network
HomeDairy‘It looks like I am at home for the next 20 years’... 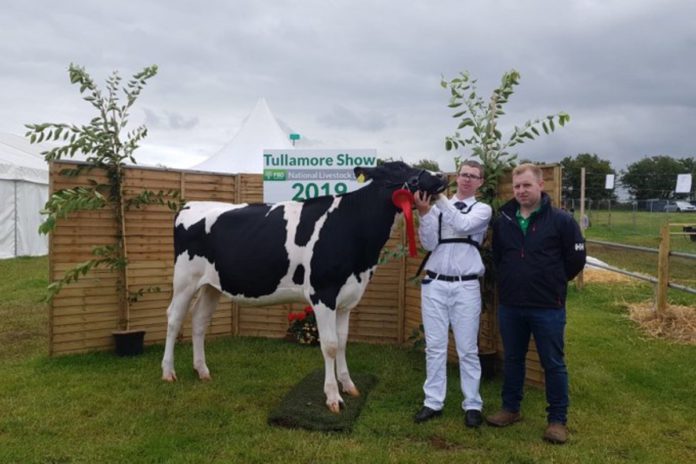 He spent 50% of his placement in the Netherlands and the other six months in Moorepark Food Research Centre.

“I originally planned to go to Canada for 6-9 months when I finished UCD, but with the Covid-19 pandemic and everything,” Evan Walsh told That’s Farming.

“I paid the deposit to a travel company to apply for a visa. Then, they went bankrupt, so they gave me the details to apply myself and then Canada closed their borders to all travel.”

“Then, we ended up buying land next to us, so we formed a partnership. It looks like I am at home for the next 20 years.”

In 1958, Evan’s grandfather, Andy Walsh, set up the farm and then his father, Paschal and uncle, John, took the reins.

“From the 1980s onwards, we went full Holstein Friesian.”

“My father and my uncle bought in calves and heifers. A few of these came from England and different sales around Ireland.”

“Egremount is a big family that we have. We did ET work, so I think one-third of our herd is Egremount.”

The UK cow families include Lima and Crystal.

He explained why they chose Holstein Friesian.

“They seem to be the most efficient cow. They are about 650kgs live weight and able to do 600kgs of milk solids.”

“They are eating more meal, but we are able to feed them well in the winter and still have our winter contract without having too many cows.”

“They are a bit big for some of our land, so we would kind of be quicker to house cows sooner than other farmers with smaller cows.”

“Half our land is away from home, so it would be easier grazing silage.”

“That benefits because we cannot graze the land anyway, so early housing is not a big issue.”

“I do not think there is any other alternative breed for a split-calving system. I know they eat more than other cows, but they are putting that back into the tank.”

“Other breeds would put the extra bit on their back but would not put it in the tank. So, I think you are losing a lot of efficiencies that way.”

The family carry out milk recording every six weeks.

They achieved these figures using silage, brewers grain and one-and-a-half tonne of meal to heifers and two-tonne to cows.

“I am surprised by the cows at the moment.”

“We were thinking of buying one or two cows to fill our contract but were managing to fill it, and milk solids are pretty good at the moment.”

“The most different thing we do is zero-grazing. We do a lot of that in the autumntime.”

“We use the zero-grazer instead of doing a fourth-cut where the cows come in at nighttime.”

“We would have three loads of grass. We dump it into the shed and push it out with the loader.”

“It seems to keep the cows happy. It is a lot handier than doing the fourth cut of silage because you do not have the pit space.” 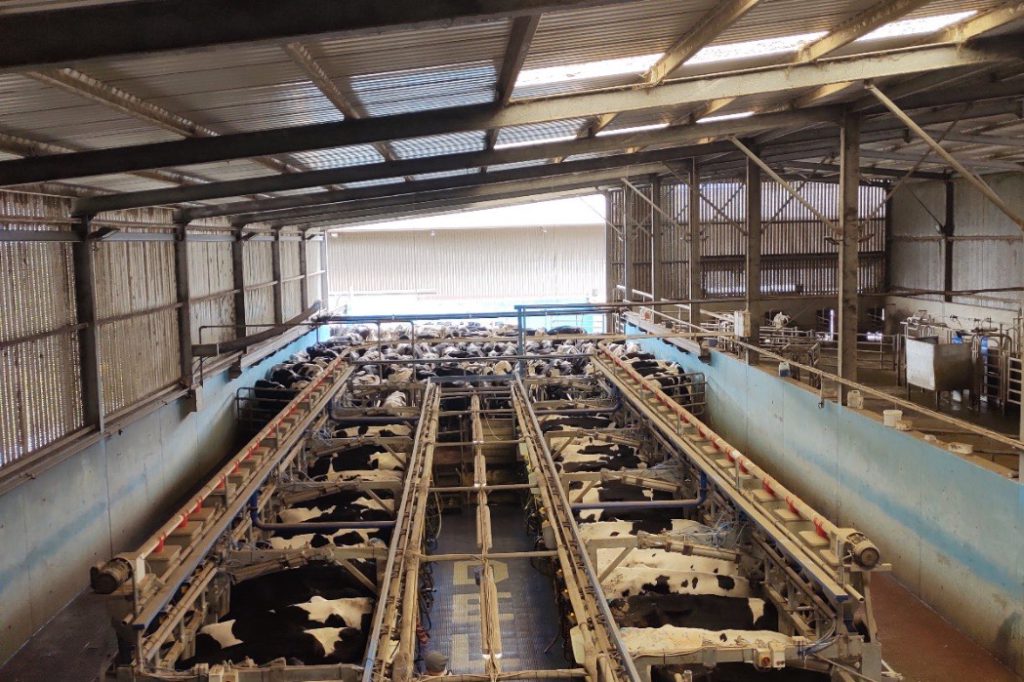 The family has advocated a 100% AI breeding programme for over 25 years. They carried stock bulls before contract rearing.

“Up until four years ago, we used conventional semen with a small percentage of sexed semen heifers.”

“Now, we utilise 100% sexed semen for any dairy bulls, and then we use Belgian Blue, Simmental, or Hereford and Friesian for the rest.”

Breeding takes place for the autumn herd after Halloween to the end of February, with the spring herd from mid-April to the end of July.

“We stop AI’ing at the end of February, so the month of December gives us a break.”

They use tail painting, scan twice and check cows during these periods to identify animals.

“We have noticed one issue with teat length. Some bulls with wide chests seem to have narrow teeth, and they are leaking in the parlour.”

“You try to sort one trait out, and another problem trait seems to appear.”

They calve one-third of their herd in autumn and the remainder in the spring. This divided calving season allows them to clean out and air housing.

“We called ourselves split calving five years ago, but we were calving every month of the year.”

“It was always a disaster because calves were always arriving and had to be fed in the evening.”

85% of their calving cases are problem-free with supervision for all births.

They leave calves with their mother for up to two hours- depending on when they are born, and.put them into straw pens when the dam is being moved or milked.

Their six-week calving rate figure is 50-60%, with a herd calving interval of 440 days.

They calf down their heifers at 24-months.

“For calving at two years, you get the longest production cycle from your cows.”

“The experts have research to prove it, and when you consider it, three-years-old is a whole year that they could be milking.”

“From my lectures at UCD, I have learned it takes 1.5 lactations to pay for the rearing of that animal.”

The Offaly farmers retain 100% of their heifers.

They contract-rear heifers with Michael Guinan during the spring, and they return in autumn. The farm sends their cull cows to the factory via a livestock haulier. 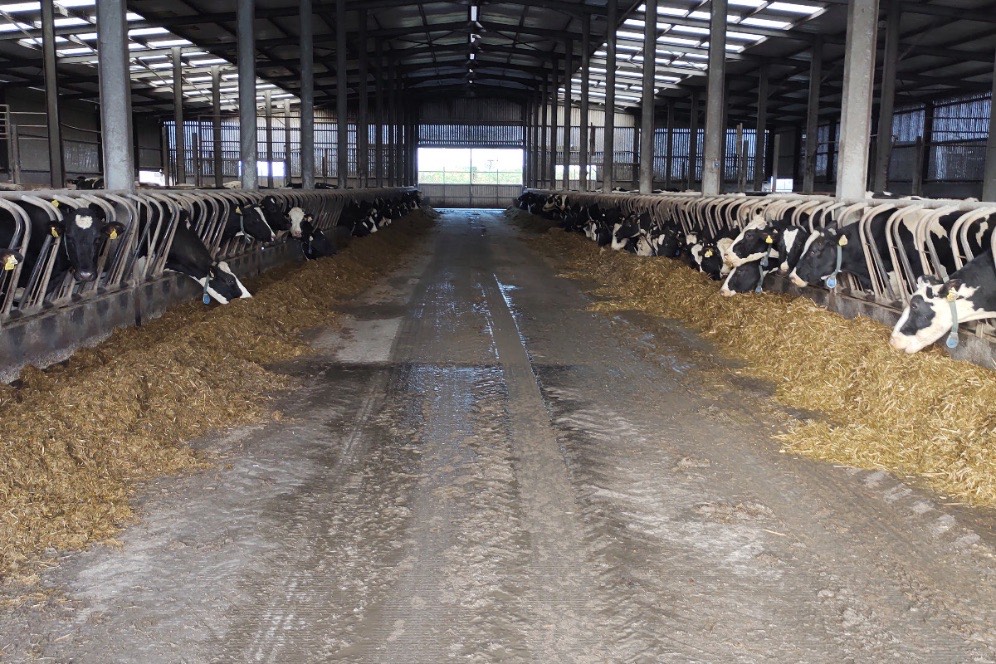 They milk in a 20-unit double-up rapid-exit DeLaval milking parlour they installed 12 years ago.

The parlour has four auto-feeding stations.

The family had a great 1970s 10-unit DeLaval milking parlour on their out-farm and a tied in 20 cow stall dating back to Evan’s grandparents time before this.”

“My uncle was retiring, and my father wanted to modernise the farm. My eldest brother was originally supposed to be farming, but he is gone teaching.”

“The parlour is being used by the person it was not even built for, which is funny.”

The family has plans to upgrade their current milking parlour by installing a feeding terminal and syncing it to a computer.

Other farm infrastructures include a 300-cow cubicle shed and calf pens.

Then, in the second yard, they have an old slatted shed with two-third of it in cubicles and the other third straw storage and calf pens.

He uses technology in the shed by using Pollock rope scrapers and also use their smartphone to record daily activities via Herdwatch. 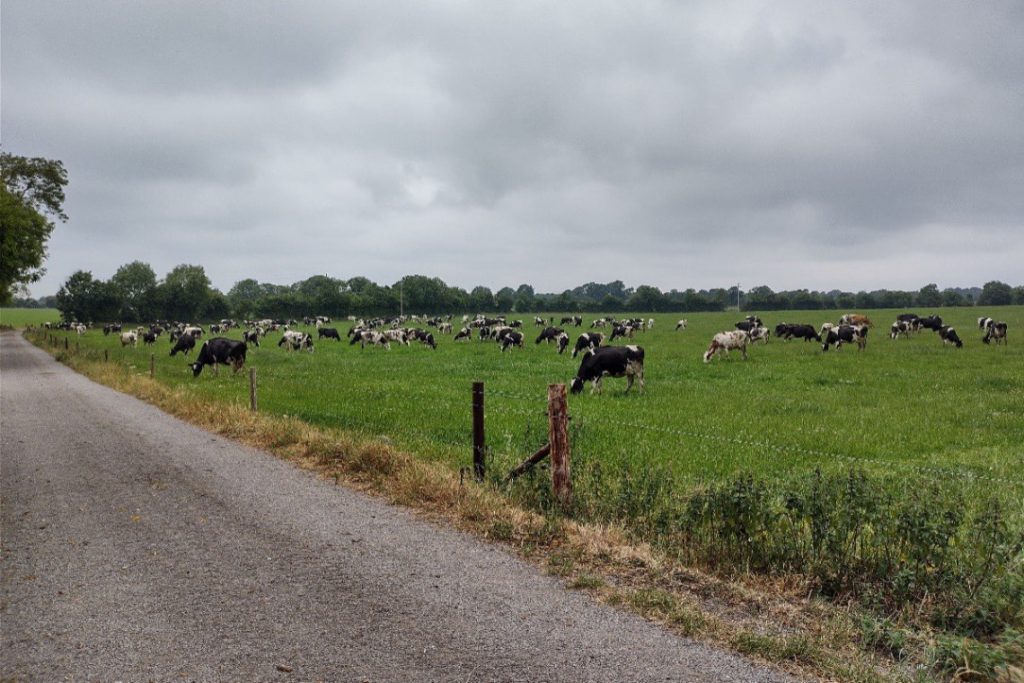 The family is a part of IHFA Laois Offaly Friesian Breeders’ Club. Evan and his family picked up the silage award on two consecutive occasions with the club.

They also came second and third in the IHFA herds’ competition heifer category.

He outlined what challenges he faces in dairy farming.

“We seem to have challenges everywhere at the moment with environmental matters, EU governmental regulations and co-ops squeezing us with the threat of disease and weather.”

“With the nitrate changes, they are trying to push our system out into the sort of grass-based breeding EBI route. I do not think that suits everyone to go that route.”

The family intend to continue focusing on a cow with milk and strength and use as much sexed semen for breeding more heifers.

Their target is to achieve 700kgs of milk solids and 2 million litres of milk.

In the next four years, they plan to reach 260 cows and a figure of 240 next summer.

“We bought 20 heifers this year, and last year, we bought nine heifers, so slowly we should be going up in numbers.”

The IHFA member outlined his opinion on the future of dairy farming.

“The regulations are probably going to get tougher because I do not think any farmer can meet those methane gas targets.”

“As far as I know, the studies on feeding seaweed and methane reducing products are only a temporary solution because microbes in the rumen and adjusting to a new additive stop being effective after a few weeks.”

“So, you might have to be jumping between products to keep your methane emissions down.”

“I think it is a cat and mouse sort of game you are going to be running after,” Evan Walsh concluded.