Two sets of Fleckvieh triplet calves have been born on separate farms in Northern Ireland.

David Johnston’s and Alan Boyles’ cows’ have defied the odds of 1 in 105,000 by doing so in recent months.

David Johnston, Newtownbutler Fermanagh runs a 200-cow herd and ventured into the breed one decade ago.

His set of triplets were born last July to a pedigree Fleckvieh cow he imported as a calf from Germany. He did not know the cow was carrying triplets as she was not scanned.

“I checked the cow last thing at night, then first thing in the morning, and there was still no sign of anything. Then, we went up to the shed again at about dinner time, and there was one calf.”

“We got the second, and then, we found the third. She did everything herself, so, we did not have to assist her at all.”

“This was our second set of triplets we had out of a pedigree Fleckvieh cow in twelve months. The other was an Angus that was crossed on a Fleckvieh cow, and her triplets survived.”

“She had one heifer and two bulls, which we sold at five-months-old. The triplets did not do the cow any harm as she was AI’d one month after calving, and she held the first time. The cow did not lose any condition after having them.”

Since Johnson began using Fleckvieh genetics, he commonly has had sets of twins and believes this is because of the breed’s fertility.

Months later, in December, Alan Boyle, Ards Peninsula, Co. Down, a 280-dairy cow farmer, welcomed triplet calves. He started buying Fleckviehs twelve years ago but has been focusing more on the breed since 2013.

The dam is a cross-bred out of a Fleckvieh bull, and her dam was a Montbeliarde-Holstein-cross.

“She had two bulls and a heifer. There are four calves in the pen, and you can barely tell the single calf from the triplets.”

“We had triplets maybe fifty years ago, and only one of them survived; it’s not very often that all calves survive.”

“A Fleckvieh cow can withstand most things. This cow is on her fourth calf now, and each time, she has gained nearly a month. She had 6,000Ls in her first lactation, 6,924Ls in her second one and 7,003Ls in the last one before she had triplets.” 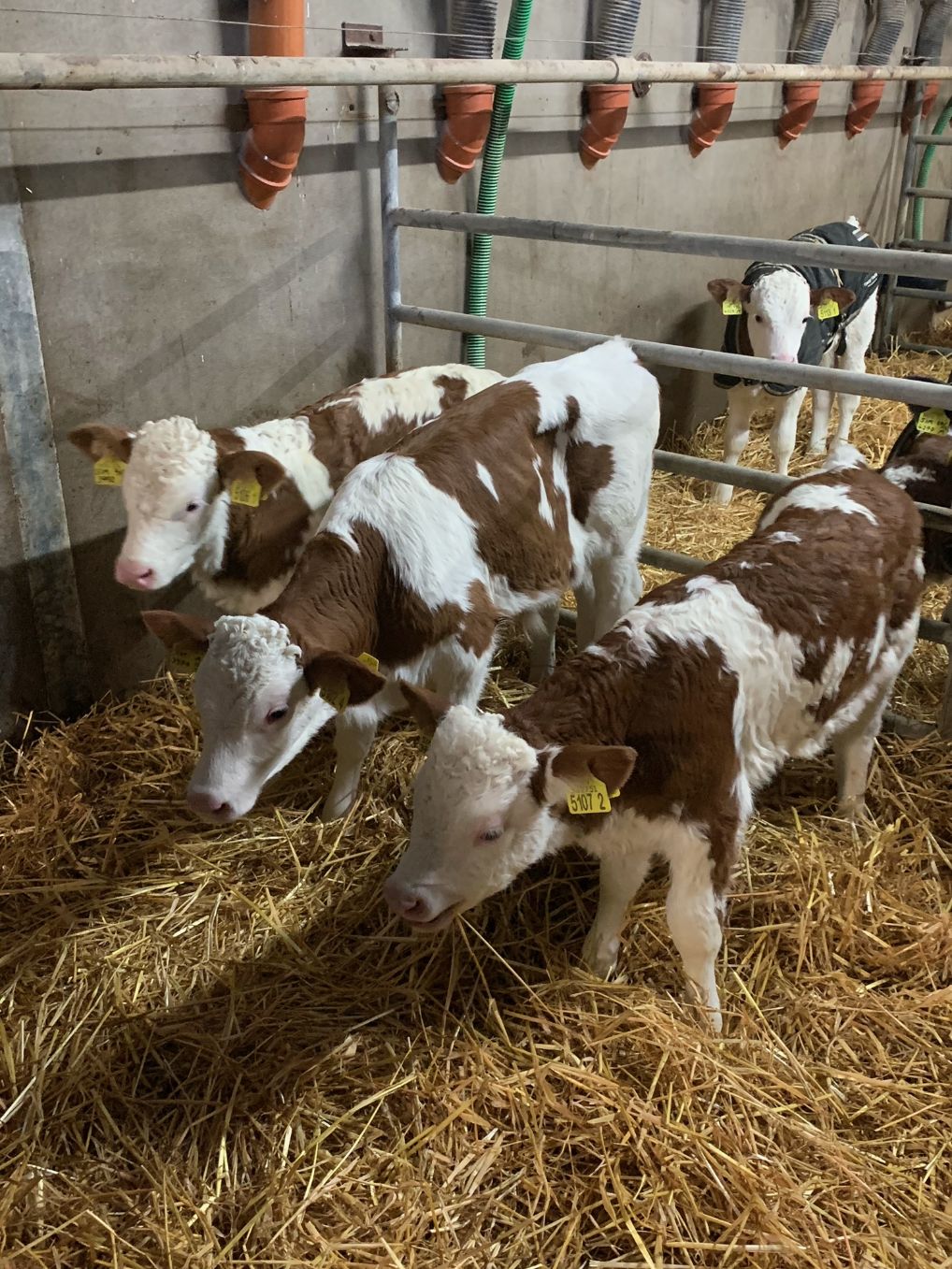 David Hazelton, who supplied semen which sired these calves, is one of the driving forces behind the Fleckvieh breed’s growing popularity.

David Johnston’s triplets are by Mahango, and Alan Boyles’ triplets are sired by Walfride. Hazelton sourced the semen from Bayern-Genetik, a globally acting company with Bavarian roots, and now works as a consultant/agent for Eurogene AI.

“Cows that have multiple births take a lot of time to recover and sometimes do not recover, whereas both these Fleckvieh cows were back in the parlour the next day milking away with no setbacks.”

In 2003, he ventured to Germany where he saw the breed, which prompted him to import semen to supply some customers for cross-breeding programmes.

“It has just snowballed from that. I’m selling 10,000-12,000 straws a year for the last three or four years. A lot of farmers are sceptical; they look at Fleckviehs and think that they are too good to be true. But what is happening is that they buy some, and tell their neighbour.”

“You have a dual-purpose cow. A lot of dairy breeds have bull calves that are worth very little and at some stages, there is no market. A Fleckvieh bull calf going to the market 3-months or so is somewhere in the region of €300+.”

“The cow’s cull value and carcass value are about three times that of a Holstein. Meanwhile, vet bills are a whole lot less; they are a very fertile breed and produce better quality milk,” he concluded.

To find out more about the breed, see here.