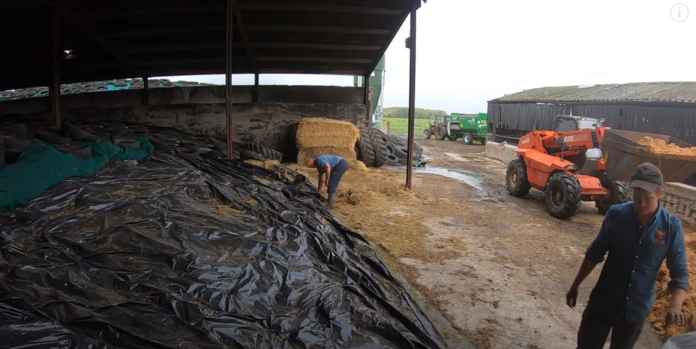 ‘Don’t just view your grass clamp as a storage pit’

Ecosyl has prepared a five-point checklist in an attempt to urge farmers to review their silage clamp ahead of this year’s season.

It advises farmers that clamps provide an “invaluable” source of information, which can help improve silage-making this season.

A spokesperson for the company said: “Don’t just view your grass clamp as a storage pit. You feed silage for six months of the year or more.”

“Its quality and quantity can have a massive impact on a farm’s financial health,” the spokesperson stressed.

It asks farmers to check the following:

Five-point checklist for your clamp

1. How does the clamp look?

Firstly, the company advises farmers to begin by assessing how tidy the clamp is and stresses the importance of “being honest with yourself”.

“Is the face untidy and allowing air to get in? If so, correcting an untidy face is a fairly ‘easy fix’. If you do it now, it can make a big difference to reducing air ingress and surface wastage this year.”

“If waste is present deeper in the clamp, it may be a sign of a poor fermentation. Which means you may need to improve the way you make silage in future.”

Farmers may need to consider the following:

According to the company, inadequate consolidation is a “big” problem nowadays. Trailers often arrive at clamps in “rapid” succession, leaving “little” time to properly compact and roll the previous load.

“If darker, black layers are visible in the silage, it can be a sign that excess nitrogen was present in the grass when it was harvested. After applying nitrogen, it is important to allow a long enough window before cutting.”

According to the company, another good indicator of the quality of the silage’s compaction is its temperature. In essence, it needs to stay cool.

“If it is heating up, it is a sign of aerobic spoilage, which is caused when yeasts and moulds feed on the silage in the presence of air. This action effectively ‘burns up’ its nutrients.”

“Unfortunately, problems with heating in the clamp won’t go away when the silage is exposed to more air at feed-out. You may need to consider an additive to reduce heating in the feed trough.”

“To prevent heating next season, better clamp consolidation and sealing may be required,” the company explained.

Another simple check is how the silage smells: Is it sweet or unpleasant?

According to the company, if it has an unpleasant smell, it could indicate a poor fermentation, caused by undesirable micro-organisms, has taken place.

“As with aerobic spoilage (heating), this means some of its feed value will have been lost.”

“Even if you have done all the other ensiling steps well, if the fermentation has not been effective, your other efforts may have been undermined.”

“Next season, take as many steps as possible to ensure only ‘good bacteria’ that produce the right type of fermentation dominate the clamp,” the spokesperson added.

Next, the company urges farmers to check the silage’s texture.

“Slimy silage can also be a sign of excess nitrogen present in the grass at harvest. It can also be due to low sugars and a poor fermentation allowing undesirable microbes to take hold.”

“These undesirable microbes have effectively started to break down what is in the clamp.”

“As well as checking whether silage is slimy, check also whether it is leafier or more fibrous than you expected.”

“If it is excessively fibrous, it suggests the grass was cut too late and contains excess stem material. For example, if cutting was delayed in pursuit of extra bulk.”

The company advises that optimum cutting time for both yield and quality is just before grass starts heading. After heading, its digestibility falls by approximately 0.5%/day.

If it is wetter or drier than expected, it may be a sign that you need to re-check your wilting technique.

Wilting to 28-32% dry matter – and doing it rapidly – is the optimum for both minimising in-field losses and minimising effluent risk in the clamp.

“If the silage is wetter than the grass that was originally ensiled, it can be another sign that the fermentation was slow and inefficient.”

“That is because a by-product of a slow fermentation is water. Ensiling with a proven additive will reduce this risk.”

- Advertisement -
Previous article
Beef and stores ‘a very good trade’ at Blessington
Next article
Agroforestry: Up to €6,220/ha