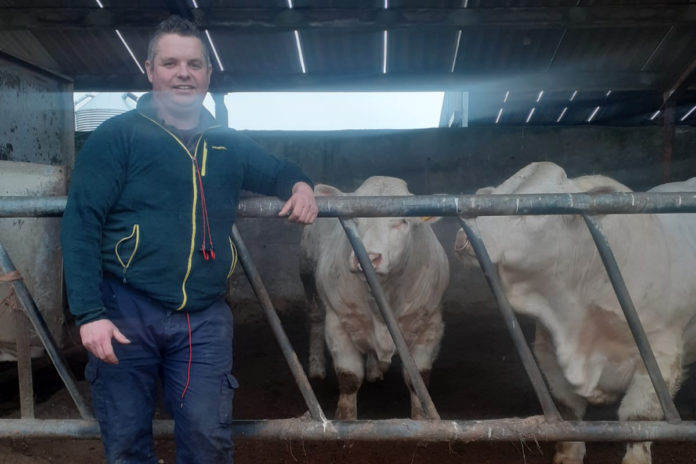 In this week’s Suckler Focus, That’s Farming, profiles Daniel Conway of Scardaune Charolais, about how the purchase of a sole bull, Derryowen Harvey, changed everything for him.

They say, ‘one animal can transform a herd,’ and Scardaune Charolais’ investment in “one-in-a-million” Derryowen Harvey is a testament to that.

Daniel Conway, Claremorris, County Mayo, views this bull’s acquisition in 2013 as a game-changer for his herd, which his father, Oliver, founded in 1994 with two females, before purchasing two others in France years later.

The family dispersed their 30-cow commercial herd and flock of 150 pedigree Suffolks, to focus solely on pedigree breeding. However, the transition did not go as smoothly as expected due to inconsistent calf quality, as reflected in monetary returns.

“In the early years, when using AI, I found that out of every ten bulls, we may only have had two good bulls. I found that calving and quality were inconsistent,” Conway, who has sold bulls to €9,200, told That’s Farming.

“I was on Pat McClean’s farm one day; he is an exceptional Charolais breeder and close friend and advisor. I told him that I wanted to buy a Roughan Echo son. Pat put me in touch with Kieran McLoughlin, who had the first calf off this bull and a Roughan Viceroi dam.”

“I went down, and my wife bought 11-month-old Derryowen Harvey for me; I knew it was love when she bought me that bull. Honestly, I am a firm believer that if a decision feels right for you, that you should go with your gut, and I did just that.”

Harvey’s seventh and final consistent crop of calves will arrive at Scardaune Charolais this season. However, the Conways have retained one of his sons, Scardaune Ollie (out of an Uvonromane daughter), to ensure his legacy will live on.

Harvey’s addition to Scardaune Charolais has not only been instrumental in strengthening its position in the Charolais circles, but it has also allowed Daniel to achieve what pedigree breeders only dream of: securing a home-bred bull in AI.

On the other hand, the Conways have retained all Harvey’s daughters, except for one they offered as a prize through DC Farm Competitions.

“Harvey brought head improvement, strong maternal traits, ease of calving, and progeny with small birth weights that maintain condition easily. He ticked so many boxes that it could take me three or four different bulls to get to that level.”

Ease of calving and cow-type

Daniel highlighted that calving ease is the most sought-after trait on his farm, as he works full-time as a machinery operator. His father, Oliver, is not as involved in the enterprise in recent years, and, therefore, ease of management is paramount.

He cited that ease of calving has resulted in a low mortality rate on the Mayo-based enterprise.

“It is better looking at a small, live calf than a big dead calf. If a cow cannot rear a calf, there is no place for her on our farm. We do not carry any passengers.”

Daniel calves half of his herd from September through to November and calves the remainder in March and April. He noted that stock bulls have reduced the herd’s calving window and assisted with achieving its one calf per cow per year target.

Bloodlines within the 65-strong herd (30 females) include Pinay, Major, Prime Roberto, Commander, Nelson, and Nippur, with a small percentage of AI sires utilised, including Uvonromance, Penny, Nippur, Panama and Major.

“I look for milk, size, fertility, a nice head and power with females ranging from 750-1,200kgs. I operate a strict culling regime cull cows that miss two cycles and are close to ten-years-old, or if they lose quarters. In saying that, I give them all a chance to prove themselves.”

Heifers are served between 20-24-months to “allow them to mature with no calving issues”.

Daniel is deploying a new breeding strategy, utilising Salers and Limousin sires on some pedigree Charolais heifers. However, down through the years, he has focused on using Charolais-only sires.

He has recently acquired a new stockbull, Roughan Peare, from McClean and is optimistic that he will help the herd to reach new heights along with the aforementioned Ollie.

Success based on returning clients

Scardaune Charolais sells an array of young breeding bulls annually, with 60% of these sold privately from the farm. Meanwhile, it offers a selection of males for sale at Irish Charolais Cattle Society premier show and sales.

“Our customers keep their Scardaune bulls for eight or nine years, so the animals do stand the test of time. It is so important that the herd receives adequate mineral supplementation as animal health is our priority.”

“Our customers are always to the forefront of our minds, with commercial farmers being our main target market,” added Conway, who does not exhibit cattle at agricultural shows due to time constraints.

“We understand that suckler farming is challenging. When people come to the yard to buy a bull from us, the majority have 25-30 cows. We try to have a bull for people like that as we know it is often difficult to justify a hefty investment.”

“Our motto is to sell bulls lucky, with a hope that those animals will see a farmer through for 7-10 years. When he is finished with that bull, he will get €2,000 or so.”

“The difference between giving €2,500 and €4,000 for a good bull should not be a lot because the farmer will bridge the price gap with their weanlings. Also, when they sell their old stockbull, his returns can go towards the cost of the herd’s next sire.”

The Conways have built their herd based on a simple motto: quality over quantity and that philosophy will continue to be the driving force as they advance.

“You are better off having 20 good cows as opposed to 40 average cows. A suckler cow that is producing a €700 weanling is costing you money. You need to focus on consistency and obtaining €1,000-€1,200 for weanlings.”

“My father says, ‘you make your own luck by choosing the right cross and bulls and take chances’. With cattle breeding, like other parts of life, sometimes you take a chance, things do not work, and you go backways, but if you do not try, you can never go forward.”

Daniel commented on the Charolais breed’s notable strides in recent years in terms of genetic gains and its consistent performance in the marketplace.

“Regardless of what livestock mart you travel to in this country, Charolais cattle will always top sales. Charolais-sired weanlings are commanding a premium of at least €150-€200/head more than their counterparts in marts.”

“Suckler farming is tough, but we need to hold our heads up high and focus on quality stock; by doing so, sucklers will lead the way once again.” Daniel Conway concluded.