In this week’s Suckler Focus, That’s Farming, speaks to Shane Maguire, son of well-known pedigree cattle breeder, Kevin Maguire. He discusses why he chose the Charolais breed, advice from his father, agricultural show successes and the future of Irish suckler farming.

They claim the “fruit does not fall far from the tree,” and that is particuarly true in the case of former Irish Charolais Cattle Society president, Kevin Maguire and his rivalled passion for the breed.

His son, Shane, is carrying on the tradition of breeding elite pedigree Charolais cattle in his own right under the Dun Doire prefix.

Maguire, Dunderry, County Meath, was always aspired to establish his pedigree cattle herd, and “with life moving on”, he invested in his first females in 2019.

He made his first three heifer purchases from the Dolland herd and bought further heifers from the Skidoo herd, Riversdale Charolais herd (owned by his father, Kevin), and Daniel Spaight.

His father, Kevin, influenced him in his journey, having held roles within the Irish Charolais Cattle Society and worldwide within the breed.

Today, Shane’s farm is home to a 40-acre enterprise where he runs a 10-cow pedigree Charolais herd.

“We always had up to 50 Charolais commercial cattle and around 15 pedigree Charolais cows. I always liked the Charolais breed because I think Charolais is the way to go forward for the suckler breed,” he told That’s Farming.

“I think you will have a better market for your bulls than any other breed. A lot of suckler farmers buy Charolais for their weight gain and quality, and in my view, they seem to pay better than other breeds.”

His ideal cow has a nice head, length, good width in the pelvic area, has good feet, enough muscle and can rear her calf adequately.

Shane finds the genetic pool provides him with a “choice” to choose a bull for a cow and does not feel it would be “worthwhile” investing in a stock bull at this time.

“I believe the Irish Charolais Cattle Society has been doing good work bringing in good bulls over the last few years, and it was hard to get them before that.”

“If you take, for instance, Doonally New (CF52), which my calf this year was sired by – any of the AI stations are finding it hard to replace him, and he was a super bull.”

“I think no bull comes close to CF52 on the market at present. His consistency is unreal, and I think there might never be another CF52 to breed the bull for the commercial farmer’s job.”

This year he started incorporating ET work and the first calves will arrive this January. “ET work can be very costly, but if it works out and you get a good hit, it is worth the investment.”

He calves half the herd in October, the first calves arriving in January, and heifers calve at two-and-a-half years old.

“I feel that is the right age to calf them because they are good and strong. I feel the Charolais heifer is still developing to calf heifers at two-years-old, and you need to give them time to calf at that stage.”

According to Shane, by using easy calving sires during the breeding season, the herd will require “little intervention” during calving.

Shane described the herd as having “good” fertility since its inception, which he believes is down to having animals in optimum condition, coupled with routine animal husbandry practices.

He calves during these dates to ensure he has bulls within the correct age brackets for Irish Charolais Cattle Society sales, such as its premier sale and Christmas Cracker.

At the recent Irish Charolais Society’s elite heifer sale on Saturday, November 12th, he tapped out as overall champion with the intermediate champion, Aquanchoua Summer ET, and secured the highest price of €7,500.

Earlier this year, he sold a bull calf, Dun Doire Tommy, bred by CF52 and out of a Pirate cow, privately for a five-figure sum to Roscrea, County Tipperary, suckler farmer, Michael Cosgrave.

According to Shane, this bull won the national Charolais show at Tullamore Show, along with his class and the overall junior male calf champion silverware.

“Judge, Raymond Irvine, described him as a clear champion and an outstanding calf on the day,” he called.

Two weeks later, Shane exhibited this bull at Elphin Agricultural Show, where he won the All-Ireland calf and male champion and overall Charolais champion, with people concluding he “was the best calf in Ireland in a long time.”

“My father has very good customers through the years, sells nearly all his bulls at home and has great repeat customers. So, farmers are looking to buy our bulls; it does seem to be an issue trying to get them sold.”

“In my opinion, Charolais is the breed the suckler farmer wants.”

“You can see in any sales ring you go into the Charolais weanling is on top by over €150 a head at the same age. I think suckler farmers know that, which is why the Charolais bull is still in demand.” 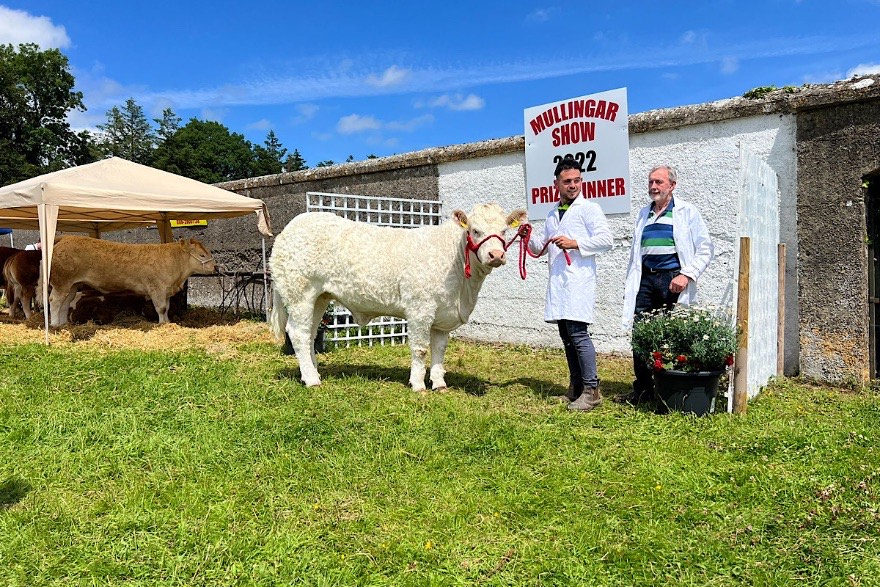 He manages his grassland, giving cattle a paddock around an acre or more at a time, ensuring calves get ahead of cows grazing fresh paddocks, which he finds “works well”.

The farm plans to reseed as many fields as possible and spread fertiliser at the beginning of each year.

According to Shane, his father advised him down through the years, and he is a “good” judge of an animal, which Shane hopes he will instill in him.

“Before investing in my first pedigree female, he advised me to look out for certain lines and to make sure there was good milk in the background and things like that.”

He described his pedigree breeding journey as a “big” success and hopes it will continue in that direction. 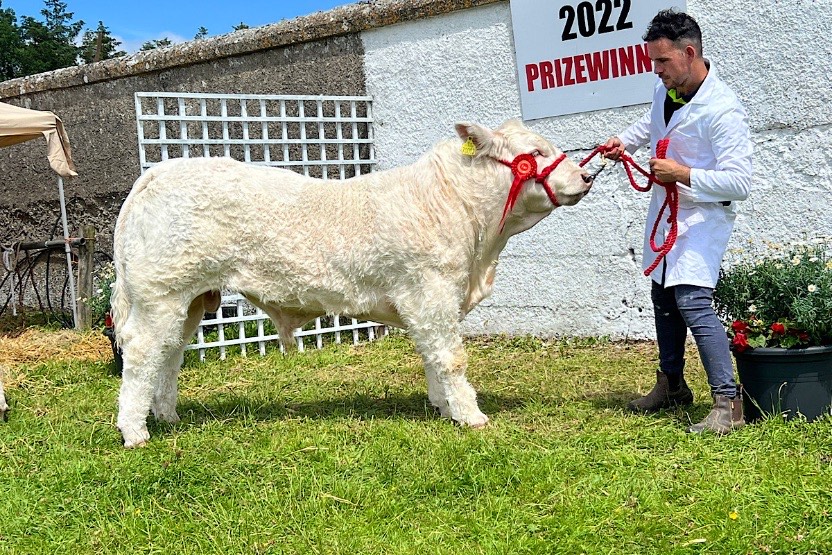 Shane intends to maintain a 10-cow herd and continue operating his construction company and Country Pet Retreat and Grooming, where he works full-time.

“To be honest, I am not going to survive on ten cows, so I have two other businesses as well.”

“I think, maybe in the future, it might be hard enough to sell pedigree bulls, and with the suckler herd reducing dramatically over the last year or two, I think there might be too many pedigree breeders then.”

“In my view, we have a serious product with Irish beef, and it should be promoted more on how good and healthy Irish beef is. If that goes, it will be an awful pity,” the suckler farmer concluded.