According to the society, spirits were “high” at Borderway Mart at its final society sale of 2021.

First up at this sum was Grahams Ruby, who won her class and was crowned overall female champion.

The January-2020-born heifer, property of R and J Graham, is the first daughter to be offered for sale from the interbreed champion of the 2018 Royal Highland Show, Grahams Naomi.

She is by the renowned AI bull, 32,000gns Ampertaine Elgin, a son of Glenrock Ventura.

According to the sales catalogues, she carries a myostatin of NT821 and Q204X and a beef value of LM41, placing her in the top 10% of the breed.

Rowena is an August-2020-born daughter of 32,000gns Millgate fame and out of Dinmore Luxurious who has a French-dominated pedigree and is one of the two flushing cows at Huntershall.

Rowena carries two copies of the NT821 myostatin gene and heads across the water to County Down with her new owners, Mr P McKeag and Ms C Ferris, who purchased her in shares.

Hot on their heels at 15,000gns was Whinfellpark Royalty from Messrs Jenkinson, Penrith, Cumbria. Royalty won her class and was female reserve champion to the joint top price heifer, Ruby.

The September2020-born heifer is a daughter of Gunnerfleet Lion and out of home-bred cow, Whinfellpark Flair.

Flair also bred Royalty’s full brother, Whinfellpark Poldark, who went under the hammer for 18,000gns in May 2021.

According to the sales catalogue, she has a beef value of LM50 and is a F94L and Q204X carrier. Royalty was the top choice for the Seisiog herd, purchased by Mr Jones, Llanrwst, North Wales. 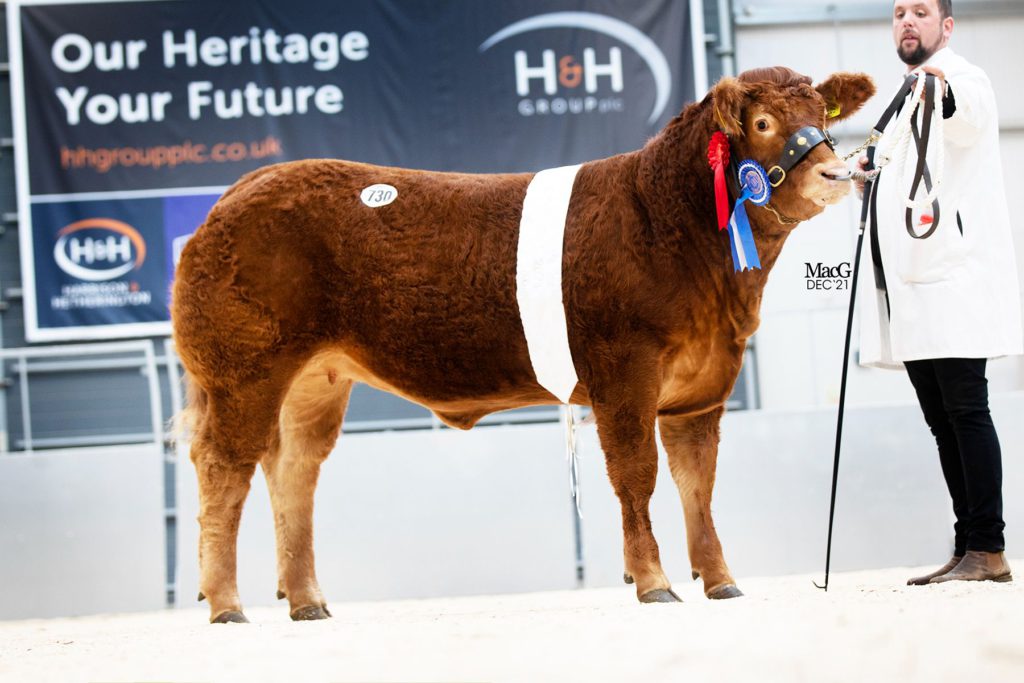 The next best at 14,000gns was Spittalton Ravenelle from J Burnett, Blair Drummond, Stirling.

The December-2020-born heifer is a daughter of Ampertaine Opportunity, who was purchased for 40,000gns in shares between Tweeddale, Goldies and Spittalton.

Out of the home-bred cow Spittalton Nigella, Ravenelle carries myostatin of F94L/F94L and a beef value of LM34.

Another heifer from Stephen Nixon and the aforementioned Huntershall herd to make the leaderboard was Huntershall Rachelriley, at 12,000gns.

The July-2020-born heifer is a full sister to Rowena, who sold earlier in the sale for 20,000gns, by Millgate Fame and out of Dinmore Luxurious.

Rachelriley was the star of the show for A & J A Iveson, Hawes North Yorkshire heading to the Eastshaw herd.

- Advertisement -
Previous articleOpinion: A huge opportunity for farmers finding it harder to make ends meet
Next article‘There is a viable place for the suckler farmer’ – 70-cow farmer