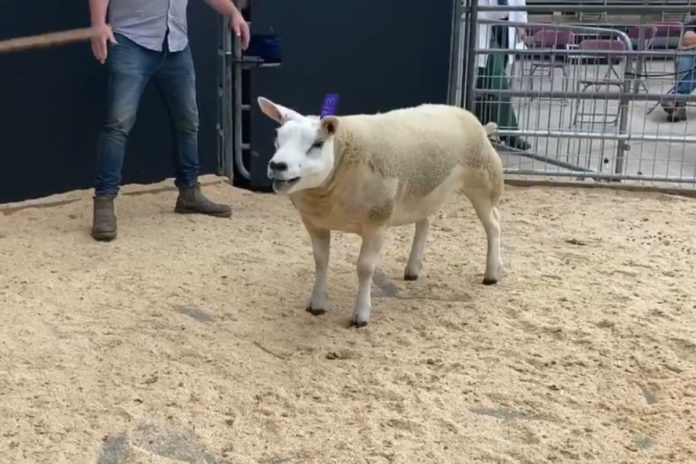 A staggering new record for the world’s most expensive Texel female has been set.

A top price of 50,000gns was recorded at the Solway and Tyne Texel Club’s sale in recent days.

The sale-topper was acquired by Charlie Boden, Sportsmans and Robert Cockburn, Knap.

“Like all of the sheep in the pen, she was turned out to perfection and showed her class from the minute she strolled into the ring.” a spokesperson for the club said.

She is sired by the 6,200gns Eden Valley Wiz Kid, a son of 11,000gns Sportsmans Tremendous, which was out of a dam by the then breed record holder, the 220,000gns Deveronvale Perfection.

Her dam side was “just as impressive” as she is by Knap Vicious Sid and out of a 7,500gns Sportsmans gimmer.

The record was set by Edward Pugh of the Glanllyn flock, at his dispersal sale, which was held following a decision to retire from farming.

Click View video of record sale here if the video is not displayed.

The Texel breed set another record in recent weeks, after the “most talked about lamb of the year”, Sportsman Double Diamond, sold for 350,000gns, as reported by us here.

The 65,000gns Garngour Craftsman son, who is an embryo-bred lamb from a ewe lamb flushed last year, went under the hammer at Lanark on Thursday, August 27th, and was sold by Charlie Boden.

Double Diamond carries an index in the top 1% of the breed and was met with an opening bid of 10,000gns.

- Advertisement -
Previous article‘We moved to the farm with nothing but some money in the bank’
Next articleVIDEO: Champion bullock sells for €1,750 at Cashel’s special beef sale